The antipasti on the menu at Monzu. Picture / Rebecca Zephyr Thomas When I say “Italian food” you’ll immediately visualise something. For me it’s a big bowl of spaghetti in tomato sauce. For you it might be pizza, or a half-empty bottle of spumante.

In fact, while the famous dishes of Italy are often hundreds of years old, the country didn’t even officially exist until midway through the 19th century. Before that it was all city states and regions, often at war with each other and variously bossed around by France, Spain and Europe’s other major powers — the foreign influence visible in the politics but also, sometimes, in the kitchen.

History was my worst subject at school, but you can’t do Italian food without a little bit of history, and some geography too. At Monzu, the new Italian restaurant in the old Merediths on Dominion Rd, you’ll leave much better informed than when you arrived.

The owner Gaetano can’t talk about his dishes without talking about his mother, and her mother, and the town they grew up in, and the local king and the French girl he married and the chef she brought with her to Napoli. The local kitchen hands couldn’t quite manage the word “monsieur” so they called him “monzu”, and the word persists today for an Italian cook creating native versions of classic French dishes. Interior of restaurant Monzu which was previously Merediths on Dominion Rd. Owner Gaetano in the kitchen. Pictures / Rebecca Zephyr Thomas

To eat at one of Gaetano’s restaurants you need to relinquish some control over the evening. I’ve complained before about him bullying customers into certain orders but his style makes much more sense here, where you are indisputably eating his food in his house. To save him having to talk you into the antipasti they offer barely anything as a starter — and good for them.

So, for $16 you get a perfect little plate of Mediterranean vegetables variously sliced, fried and roasted, seasoned with parmigiano (sometimes) and olive oil (always). It will hurt him when eggplants are five bucks a pop in winter but in the height of summer this plate of lightly adorned produce makes so much sense.

With the vegetables come a couple of slightly heavier creations — a cheesy sort of frittata, a good mozzarella and a standalone dish of bread, tomatoes, anchovies, basil and truffle cream. Of course it’s not just bread, it’s an especially hard style of loaf that responds beautifully to soaking up flavours without losing its bite — panzanella without the sog.

READ: On Our Radar: Four New Openings to Visit

There is much more to choose between in the mains, and the menu is so good that once you’ve narrowed your selection down to a couple of dishes the waiter will come along and strongly recommend three more you weren’t even considering. So you’re back to square one. Then Gaetano shows up and says “I’m doing something with lobster tail tonight, shall I make you one?”

Minutes later, no closer to a decision and trying desperately to knock something out of contention you say to the waiter “so how much does that lobster tail special cost?” and he replies “I don’t know anything about a lobster tail; Gaetano just makes what he makes”. 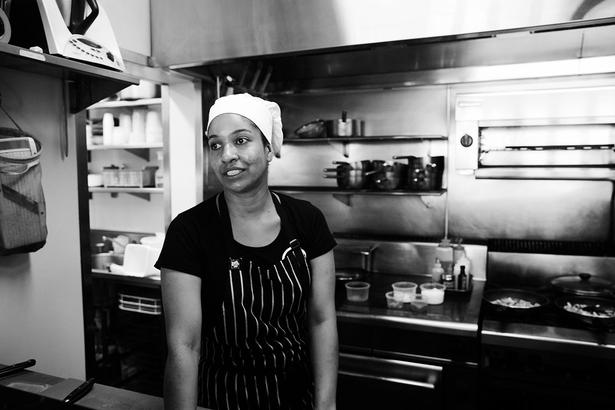 In the kitchen of Monzu. Picture / Rebecca Zephyr Thomas

Are you getting the picture yet? This is a completely different sort of restaurant, one where the menu is a good guide to what you will eat, but only the beginning of the story. I went for that lobster and it was fantastic, perfectly cooked in its shell and served with plump prawns on saffron pappardelle garnished with chervil.

My wife ordered a seafood “soup” though that word doesn’t really do justice to the inky, intense tomato “forte” sauce judiciously poured over perfectly cooked gurnard, cockles, prawns and mussels.

Our conversation about dessert was a perfect microcosm of the Monzu experience. We’d arrived with a plan to eat tiramisu and when we ordered it I saw his face fall a little. He didn’t complain exactly, but I realise now that tiramisu is to Gaetano what Hotel California is to the Eagles.

What he really wanted to serve us was a rice-based baked pudding from his home town, which he’d made that day. He couldn’t resist putting a little on the plate next to our tiramisu. It was incredible — light and spongy — and I regretted not following his advice.

Did I think that was good? I should come back tomorrow, he said, for the pastry that needs 48 hours resting and would have been done tonight if he hadn’t been so busy shopping at the market yesterday … when that pastry was ready he’d be making another of his hometown puddings that was even more special.

I nipped to the toilet and when I came back I found Gaetano, hovering in the dark, peering through the portholes in the kitchen doors, anxiously watching who knows what. It’s a stressful job, running your dream restaurant.