If you’re eating at Nook don’t bring a car. This will seem obvious to some people, particularly the ones who don’t own cars, but if you’re the sort of person who weighs up their options before thinking “oh stuff it, I’ll just drive”, you should know that not only is there currently no parking on K Rd, there is no parking near K Rd (not even the Aucklander’s best friend, a loading zone with ambiguous signage). It’s all either coned off or dug up, and you will find yourself driving hundreds and hundreds of metres just to find even an occupied parking space, let alone an empty one.

My wife and I eventually found somewhere to park the Toyota, locked it up and then, some weeks later, arrived at St Kevins Arcade by foot. We were hungry, and I had that post-work irritability that is only really solved by downtime or alcohol, and so it would have been juuuuust perfect if we’d turned up to find Nook full with a two-hour wait list, then had to desperately wander the busy strip looking for a restaurant bad enough to have room for walk-ups at 8pm on a busy Thursday but, hallelujah, our plan A was a success and we soon found ourselves sitting down at one of Nook’s quite generous number of tables, looking over a menu and feeling very pleased with life.

If a drink had arrived 30 seconds later I would have called it a perfect landing but the two waitstaff were only just keeping up so when we finally got some attention we had to order everything at once. I don’t want to overstate things but I will mouth kiss the first Auckland waiter who says to me “please take a seat can I bring you a beer?”. 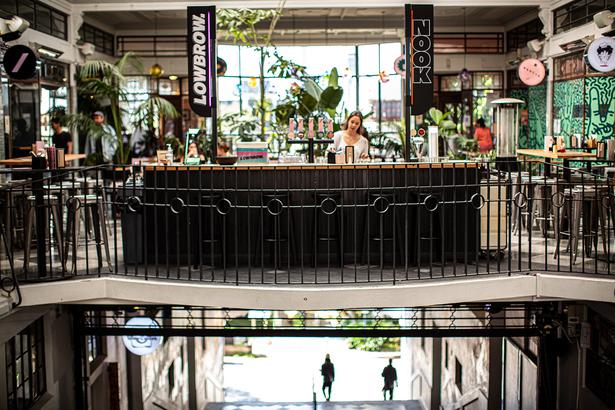 It shouldn’t feel as lovely as it does, sitting in the lobby of an old shopping mall for dinner. But thanks to Gemmayze St and others, St Kevin’s popularity is half of its vibe.

This is not our parents’ K Rd — the place you would mainly hear about in news reports describing where a missing man was last seen — but still it’s an unlikely second outpost for the team behind Culprit, who spend the rest of their energy serving suits on Wyndham St. Their fast, delicious food feels even more appropriate here, and with opening hours past midnight and the option of a set menu for one, it looks as though Nook’s niche will be hungry hospitality workers who’ve just finished a dinner shift.

We were bringing our own niche — busy married couple taking a night off from bingeing Cobra Kai on Netflix — and there was plenty for us here too. We’ve become the types who will always order certain dishes if they’re on the menu, and one of those dishes is beef tartare.

I’m therefore qualified to tell you that this is the best one in Auckland, with all the cold pleasure of raw beef, mixed with just enough sauce and seasoning that you don’t feel like you’re biting into an actual live cow, served with these big puffy nori sheets for dipping and a puree base of, close your eyes and imagine, “shiitake dijonnaise puree”. We ordered it with another cold starter: a crunchy cucumber salad with chili-sesame dressing, the Japanese adaptation of the Chinese classic, used for centuries as a refresher alongside hot food or hot weather. 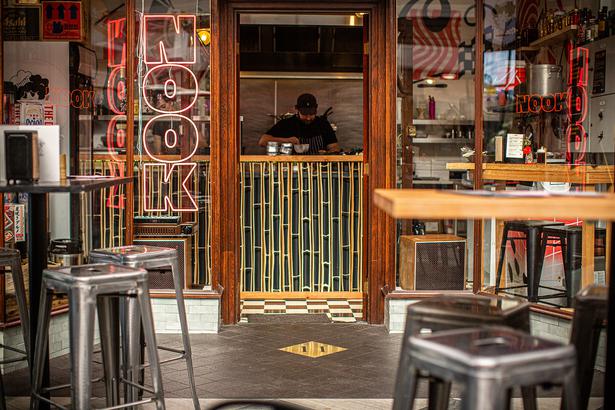 But these dishes are probably atypical examples of the menu, which is mostly a mix of sticks and fried treats — sometimes both at once. And though charcoal-grilled salmon belly is nice if you’re in the mood, for comfort and flavour-punch you won’t beat the shiitakes, deep fried and stacked up on a skewer.

A bowl of pickles should be compulsory and you must definitely try Nook’s loaded rice bowl, which for five dollars is the thing to seek out next time you have a craving for fast food and feel as though McDonald’s is the only thing that will do. It’s a little mountain of tastebud glory, combining everything the chef has learnt about taste and flavour and delivering it in a small bowl that I predict will make this restaurant famous. There are other great dishes — a smoky eggplant with the highest condiment-to-aubergine ratio I’ve ever come across, and juicy chicken meatball skewers — deep-fried, I think, before being finished over coals.

With Lowbrow and Gemmayze alongside it, Nook has turned St Kevin’s Arcade into the sort of place you can arrive at without necessarily committing to where you’re going to eat beforehand. Thank goodness for people like its owners Jordan McDonald and Kyle Street, who continue to innovate while much of the industry is gasping for breath. Great business people make for great cities, and we should celebrate them with the same passion we reserve for sportspeople and pop stars.