I ate this meal with wine connoisseur and former super-anchor John Hawkesby, whom I hadn't met before but who was guesting on our TV show and had sent a message via the production team that he would be available and enthusiastic to eat dinner with me after the broadcast. You don't get a chance to eat with a television god every day, so I immediately said "yes, please!" then booked us in at Number 5, a restaurant that's been around so long John probably used to eat here with Judy Bailey after wrapping on Top Half.

Man, this was a lovely night. I grew up watching my dining companion host It's In The Bag and if you're wondering whether he was happy to answer all the questions I had about that show well, you needn't. He had the raconteur's knack of turning a Q&A into a series of illuminating and hilarious anecdotes, and I would have loved to share some of them here if he hadn't prefaced almost each of them with the phrase "Chatham House rules", a shorthand way of saying that what followed was unrepeatable, and unreportable.

So let me instead report on the restaurant, which is not the same Number 5 you may have visited in the 1980s. It's been closed, purchased, refurbished and re-opened by young chef Jack Crosti with superb credentials — including time at Sidart and the late Beirut. 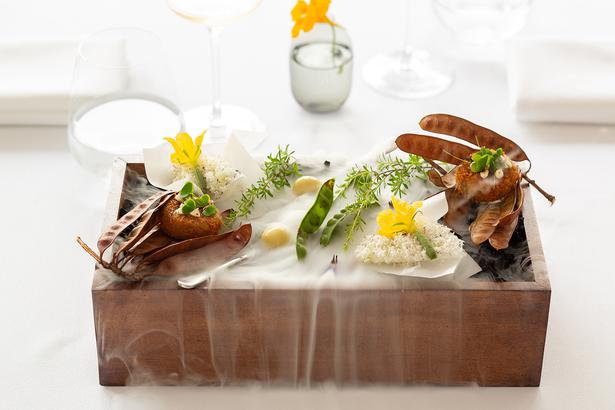 He's making a real go of it at Number 5 and you should try to get in here before word gets around and the waiting list kicks in. For now the only diners in the room were a young couple in the corner, myself and a man that the Herald reports worked at TVNZ for 37 days in 1999 then, when they tried to terminate his contract, successfully sued them for $5.57m.

I let him buy the wine. He flicked through the list for perhaps 15 minutes, trying this and that and probing the sommelier for information but was ultimately dissatisfied. I felt for him, and I felt for the restaurant even more because they'd only just opened and were trying to get through the old stock before introducing some more exciting bottles to the list. They can't have known that one of their first customers would be a wine columnist, vineyard owner and proprietor of one of the most extensive personal cellars in New Zealand.

John ordered a bottle of Seresin chardonnay, and something red from Sardinia and another one I can’t quite now recall. At the end of the evening while I paid the food bill he quietly and respectfully approached that young couple and asked if they would perhaps enjoy finishing what we couldn't, and they looked blimmin' stoked. 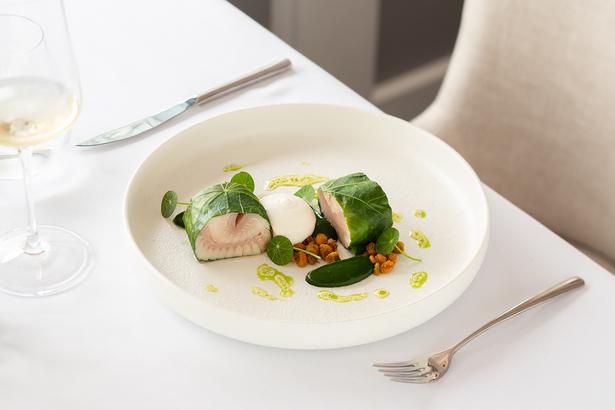 The skate ballontine currently on the degustation menu at Number 5. Photos / Babiche Martens

I was having such a good time that I abandoned our a la carte plans and asked for the tasting menu — available in three or five courses plus "snacks", so blissfully not the sort of lengthy commitment that will have my guest being picked up by his wife Joyce after midnight from the Waiheke Ferry Terminal.

An early dish of "oat milk tofu" is one of the best — I love it when you see a phrase on a menu that at first makes your mind turn over but then suddenly makes sense. The tofu is soft, almost like custard, and heaped on top are a collection of wild mushrooms cooked just enough to make them taste of themselves. Finally, the waiter pours over a white mushroom broth that tastes so good, when he saw our faces he went and found us another little jug of it to share as a treat.

It's hard to categorise the food as anything but "fine dining" although there is a Japanese sensibility to some of the presentation and flavours. I loved a piece of skate, the rough and readiest fish at the market, carefully wrapped into a sort of beautiful ballotine with a nasturtium leaf. 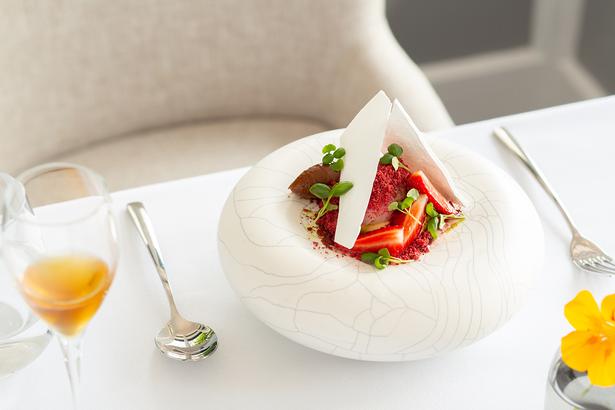 The dessert currently on the degustation menu. Photo / Babiche Martens

A piece of pork belly was cooked almost to the point of liquidity, served with a clever apple puree that was actually microchopped to avoid the slop, and some butter poached dates that tipped the whole thing too far away from savoury for me, but was nonetheless a happy indulgence.

The snacks were a great showcase for chef's talents as was a little cucumber granita that came later, served with tiny, pickled, foraged cucumbers apparently source from way out west. It's a long way to go for tiny cucumbers but it says something about the team's willingness to literally go the extra mile for flavour.

I sent John a text the next day to say thanks, but he didn't reply. One week later I received a handwritten card in the mail which began "Thank you for your recent text . . . ". There is nothing so charming as a bit of old school, and if Number 5 can combine its historical reputation with the best of the new, it will again become one of Auckland's essential restaurants.