I ate this meal with Albert Cho, an Instagram food reviewer and swear-jar filler better known as Eat Lit Food (@eatlitfood). He’s the face of an anti-bullying campaign you should look up and he is a lot. I haven’t had this much fun at dinner since taking out John Hawkesby, and though the two of them couldn’t be more different, they have the same attitude to eating out, which is that it should be an entertaining event, with everybody being a little bit unexpected and occasionally outrageous so that there is something to talk about tomorrow.

John poured a $6500 bottle of wine; Albert said something about the taste of the oysters which is unprintable in this magazine or, probably, any other. I won’t say it made me feel boring by comparison but I was definitely the straight man. 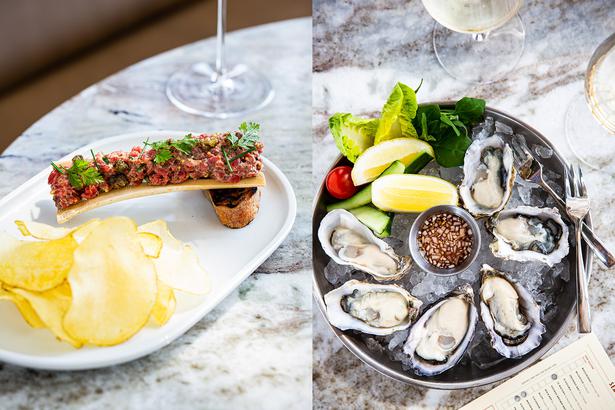 The beef tartare and the oysters on the menu at Saxon and Parole. Photos / Babiche Martens

Saxon and Parole is named for two historical New York racehorses, one stately and one scrappy, and though it is tempting to extend the Albert and Jesse odd couple metaphor here and tell you who is which, Parole was described as “light-necked, rough-coated, leggy and curby knocked” and given that Albert is a male model I suspect I’d come off second best. Let’s move on then, to the restaurant named after the horses, which began in New York and has now opened in Auckland’s Commercial Bay, a shopping centre and restaurant precinct with the best location and the worst timing.

This new restaurant is wonderful to step inside, with a prime corner site on the second floor and plenty of glass to make the most of the location. The interior is as good as anything else in Auckland and feels very contemporary, despite having been in the planning for some time. (Last week at a swanky function I handed out the supreme interior architecture award of 2020 to the architects responsible for Commercial Bay, who somehow managed to make a project which began eight years ago feel like the most modern big building in town.) Crucially Saxon and Parole is open seven days, so if you’re scouting for a vibe one quiet Monday night as we were, this will avoid a trip to the Viaduct. The interior is as good as anything else in Auckland and feels very contemporary. Photo / Babiche Martens

I approach all restaurants with an open mind and open mouth but I must admit that “steakhouse” is the genre I approach with the least anticipation. I don’t get it, though I try.

If I’m eating meat I will choose the pot over the frypan nine times out of 10 and I’m afraid that I didn’t change my mind after trying Saxon and Parole’s “shoulder tender” steak which was, I’m afraid, grey and dull. I’m mentioning it first because hopefully we can now get on with things and talk about every other mouthful of food, which was perfectly delicious.

Let’s do as we did on the night, and leave the steak on the side of our plate, next to Albert’s choice of sauce — a small pot of every sauce on the menu.

Maybe it’s the post-Covid exuberance but I’m eating oysters almost everywhere I go right now, and Saxon and Parole’s are the standout in the city. They offer a handful of varieties and it is a wonderful indulgence to order a couple of each and do a little tasting session at your table, with a glass of New Zealand bubbles to cleanse between molluscs.

The salmon crudo on the menu at Saxon and Parole. Photo / Babiche Martens

I’m not obsessive about oysters being icy cold, and in most places they’re not, but boy what a treat when they are. It brings the slight sweetness forward and crucially, allows you to eat more of them before catching that slight briny queasiness that can come when you’re a dozen in.

A lot of the best things here are cold. Like delicate slices of salmon dressed with a surprisingly spicy raw relish, such as a quick picallili. Tartare is served inside a hollowed out shin bone, with a little marrow mayo at the bottom if you dig deep enough with your ready salted crisp. And there was a silky chicken parfait with little crunchy salty bits on top that was pretty much flawless.

From the oven I’d go for the venison rack, which has plenty of fire-scorched surface and just the right kind of rare inside, and the sides are incredible — as good as the mains, if I can say that without the chef taking offence. Ask for the leeks and roasted red cabbage as a bare minimum.

The service is wonderful — professionally warm. So the toughest job you will have here is ordering, which requires you to read and comprehend a truly massive menu — it’s a 20-minute job this one, and you’ll need to focus. But the treats are worth the mahi — Saxon and Parole has lifted the game, and will challenge Gareth Stewart and his team at Jervois Steak House to go one better.

We love it when old favourites return to the table, and this classic dish is definitely one of them