Sean Connolly is a very likeable chef whose Auckland restaurants have perhaps never quite lived up to his reputation.

As a reviewer I ate half a dozen times each at Sky City's The Grill and Gusto and though both were fine, I never hurried back to spend my own money.

That's all changed with Esther, which is another restaurant attached to a hotel but where you quickly forget you’re dining in tomorrow morning's breakfast buffet hall and instead just enjoy the flawless food and the wonderful staff who, judging by their accents, appear to have been kidnapped from a top Sydney restaurant and smuggled past quarantine through the Viaduct on an oligarch's superyacht.

Sean never seemed to be the angry chef type so maybe he uses carrot rather than stick to train what might be the best set of waitstaff I've come across all year: they are knowledgeable, intuitive and a bit of fun as well.

I ate alone but didn't feel the least bit lonely. 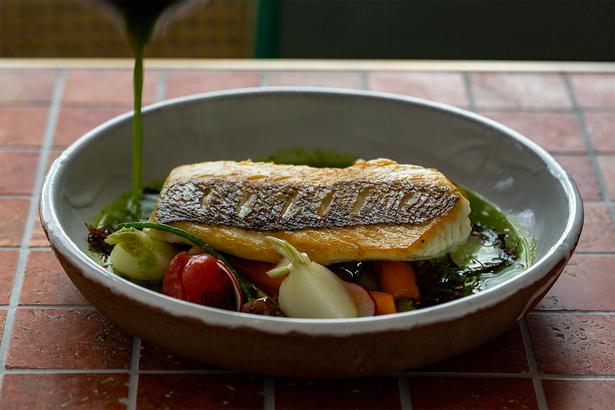 They're up for a bit of theatre too, one of them arriving at the table next to me with a mound of salt on a trolley then producing a pick and a mallet with which he broke through the saline crust to reveal a tender baked snapper underneath.

We all held our breath a little as he lifted the whole flaky fish from trolley to table, but he did the only thing you can do with a mission like this: be bold.

As with flipping eggs at home the last thing you want to do is lose your nerve part way through as that's when everything really will fall apart.

The snapper landed with a successful "floomp" on a wooden board between three people and they attacked it at once.

We could all use a little more of this stunt food I reckon. 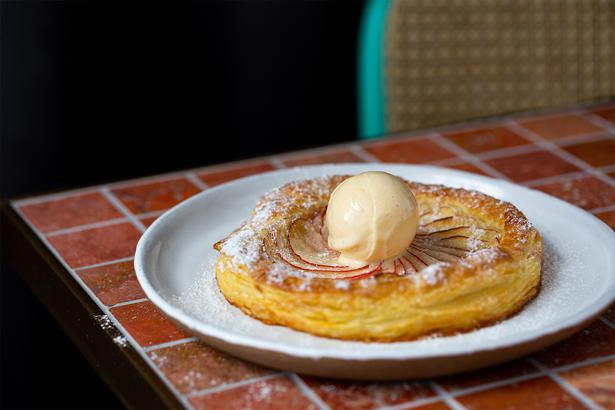 Sean's steak tartare was the theatre piece at The Grill, where they would compile the ingredients in a steel bowl tableside then stir it up fresh in front of you.

I missed that at Esther, not for the showiness of it but because by the time my tartare arrived it was well mixed, without even a yellow yolk to stir in and combine. Nothing wrong with the flavour but it's a dish where freshness is everything, and a little DIY can be reassuring.

I did like the baby cos and radicchio leaves that came with it, acting — to use verbiage I learnt while eating at The French Laundry — "as a vehicle for the meat" (the Laundry was also the first time I heard a real person use the word "verbiage").

But let's not get too deep into the food without setting the scene, because the restaurant itself is unique. You approach up steps through a sunny courtyard and into what is technically a foyer but one whose openness has been turned into a feature rather than a flaw.

It's unclear where the dining area stops and the kitchen begins as young chefs hurry about a central island preparing this and that. There are plenty of tables, and a bar area, and that courtyard which must have held 20 people drinking in the twilight.

They've hung mesh sculptures to create form out of all that high ceiling space and the toilets are really flash.

I'm not one to spend time in the bathrooms admiring the fittings but it reminded me how functional a lot of the less formal places we eat at nowadays are; there is still value in making you feel a bit like royalty when you powder your nose, and it will also attract a corporate audience, presumably essential to survival in this part of town.

I visited Tuesday and the place was packed.

The clam escabeche might be my dish of the year, a celebration of shelled, cooked, chilled kaimoana floating in a white wine broth fighting off strong flavour competition from sliced jalapeno peppers — like a refined version of those jars of brined mussels mum used to buy at the supermarket. 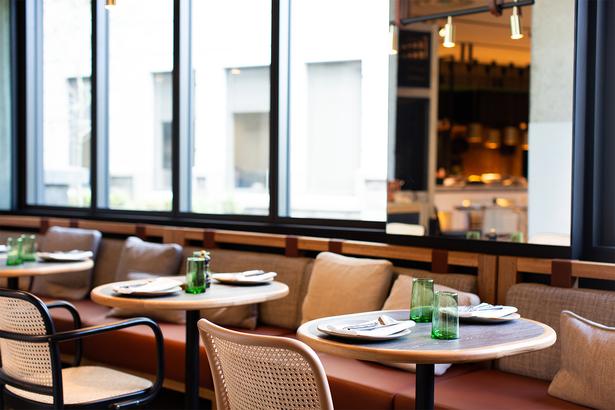 The restaurant has a warm, inviting ambience. Photo / Babiche Martens

At the bottom, soaking up everything were sliced carrots (possibly the ones they'd used to train the waiters), crisp and lightly pickled in the cold broth.

There is loads more on the menu including great pastas and big communal dishes.

And there's plenty of seafood: as well as that salt-baked fish there is a bouillabaisse, a butterflied gurnard and a single, skin on snapper fillet, with a pour-over sort of pistou consomme and bright spring vegetables, each a different shape and colour but all perfectly bite-tender.

Desserts are designed for comfort and I'd pay your babysitter the extra 12 minutes required to wait for the tart to bake; it's just thin-sliced apple on puff pastry with a little custard but, with vanilla ice cream, it's a perfect way to end your meal.

2020 must have be the most difficult year in modern history to open a restaurant but Sean Connolly and his team deserve congratulations, possibly a round of applause and, the best accolade of all, a busy room of diners happily eating his wonderful food.