The wagyu beef burger on the menu at The Brit. Photo / Babiche Martens I present a slightly one-sided view of Auckland food in this column, figuring that there’ll always be more to say about a flash, full-service restaurant than a hole-in-the wall noodle house.

And not just more to say but more freedom to judge critically — if you’re charging $12 for a handful of asparagus those spears had better be perfectly cooked, plated with care and delivered by someone who laughs very hard at your jokes.

But sometimes I get it round the wrong way. Like this week, when I visited cheap, unlicensed eateries on Sunday and Thursday then looked around on Monday for somewhere to review. That’s how I ended up at The Brit, an upmarket Britomart pub with a menu designed by Gareth Stewart, already executive chef at about 214 different restaurants, but who was clearly feeling charitable when they asked him to consult. I ordered a bunch of different things and after trying three or four of them I was already dreading writing this review. It wasn’t that they were terrible, just very average. Most things needed salt, everything needed love. How was I meant to spin that into 800 words? A few minutes later they served me a burger with a raw mince patty, but even that didn’t cheer me up.

I started thinking about how much I would prefer to be back at Des Traditions, a low-fuss restaurant in an industrial block of Mount Roskill. Des is hard to find even when you’re standing in front of it, but it’s worth the effort because the food tastes like nothing else in Auckland.

The sign says “Middle Eastern and Continental Cuisine” but it’s become a popular destination for Pakistani families in particular, who can’t find authentic food anywhere else in the city. There is a dining table, covered in a cloth, that locals climb up to and sit cross-legged to eat. In the front window a mother in a headscarf gently calmed her son by rocking him back and forth on an old swing seat. They have a “dahl of the day”, and even that is made from scratch. 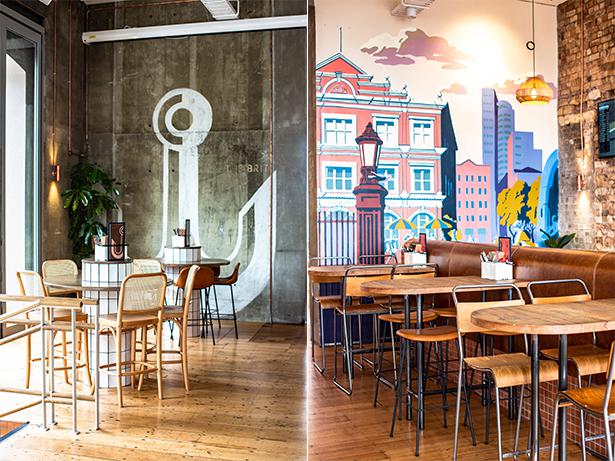 The Brit is located in Britomart, with a menu designed by Gareth Stewart. Photos / Babiche Martens

The owner has a business next door where he butchers his own halal meat and other delicacies — mutton, offal — that might be hard to find if you weren’t sourcing it yourself.

Then I daydreamed of Dominion Rd’s Chongqing Noodles, where you can choose the style of noodles and meat — “duck blood and intestine” isn’t for everyone — plus the level of spice you’re comfortable with (or even better, slightly uncomfortable with).

Those in the know ask for “half soup”, which is about the right liquid-to-solids ratio. The meals are so good that, the night we were there, we stood up after our meals to leave, looked at each other for a few seconds then sat down and ordered another bowl.

READ: Ostro Tempts Diners To The Waterfront With A Tasty New Menu

But no, I was already committed to The Brit, where they’ve tried hard to create something more interesting than a downtown sports bar opened in time for the Rugby World Cup, but haven’t quite succeeded. This is no fault of the service staff who, for example, whisked away my raw burger without hesitation, replaced it with a hot, juicy one and shouted me a beer for my troubles.

Although that replacement burger was the best thing I ate it was still only delicious in a mathematical way — you can’t make grilled beef, cheese, bacon, pickles and ketchup taste bad, it’s just not possible. But you can make it taste like a missed opportunity. The prawn tacos on the menu at The Brit. Photo / Babiche Martens

As you’d expect, the Stewart-penned menu reads pretty well. You can’t be snobbish about a “loaded fries” section — it’s perfect for bar eating — and there are a couple of options at the other end of the comfort food spectrum too, like a poke bowl with fresh salmon.

We had a go at the tiger prawns, served in tiny lettuce cups, and they were pretty good, with a decent chilli kick. It was good to see an unusual fish, lemon sole, on the menu instead of snapper, but the fillets were thin and drowning in sauce so you didn’t cut a piece off so much as scoop and lift it out of the lemon butter. It was served with broccolini cooked in unsalted water. Avoid the fried chicken, it’s dull and dryish.

The search for a great UK-style gastropub continues. We’re so far away from that part of the world that perhaps we shouldn’t hold our breath waiting for somebody to replicate the magic of the English Sunday lunch over here. Meanwhile, Asia is on our doorstep and we continue to be gifted new and interesting eateries that showcase parts of that great continent unfamiliar to some of us.

Have dinner at one of those places instead; Auckland has too many exciting flavours for you to waste your appetite at the pub.