The Grange is located in the Goodside precinct at Smales Farm. Photo / Babiche Martens I arrived at The Grange expecting not much and left wishing I could type up the review that evening, send it off before midnight then wake up to it spread across the front page of the newspaper.

Sure, a great restaurant on the North Shore might not really be breaking news, but it’s close enough to it that I couldn’t wait to tell you, and although deadlines and lead times have meant it’s almost a month since I ate there I’m still fizzing a little bit to be finally sharing the secret.

It’s a bar-restaurant in a business park next to a state highway on-ramp, yet I predict you will complain about none of these things when you arrive in your private vehicle and immediately find a park by the front entrance, having left your home on the isthmus around 11 minutes earlier. The Grange is a relatively recent addition to Takapuna. Photo / Babiche Martens

Aside from the dull view there’s absolutely no reason you shouldn’t have as good a time next to the Vodafone building as you do overlooking Viaduct Harbour, and The Grange proves this: when you’re inside and the service staff are treating you like an old friend, you quickly forget that your nearest neighbour is a 24-hour medical clinic.

In fact, just as the painter Edward Hopper managed to imbue ordinary places like gas stations and hotels with an unnervingly nostalgic sensibility, so I am right now feeling nostalgic for the empty carpark and deserted office buildings that surround this cosy restaurant. I can’t explain it, but it’s true.

So often a restaurant that looks good at first glance will slowly reveal its deficiencies — the first dish is under-seasoned, the second is overcooked, nobody takes your wine order, the table starts to wobble. But at The Grange the opposite happened. 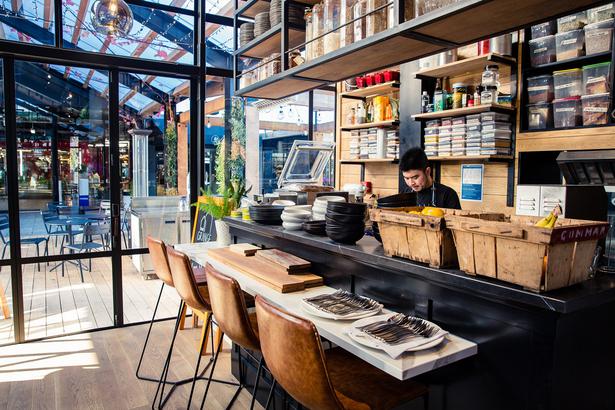 The Grange is an all-day bar and bistro. Photo / Babiche Martens

Each new experience was a pleasant little “aha” moment — the winelist, for example was brilliant, and the waiter had an opinion on every option. You could order a glass, or the whole bottle, or something in between — a carafe, if you will.

We didn’t order a carafe, although it was nice to know we could have; instead I ended up sipping on a superb glass of orange wine, a style that is brave to stock and even braver to recommend. There were also a list of Dry July cocktails — not one or two, but a special menu with half a dozen.

Every dish was delicious, clever and perfectly cooked. Each week I do my best not to overload you with food adjectives — despite being a devout long-form cook myself, I always start skimming when food writers list what they ate. But I take loads of tasting notes in case they’re useful down the track and I recorded this meal in greater detail than ever, because the ingredients were interesting and the technique flawless. Although there is familiar comfort in each dish, there is also innovation and risk. 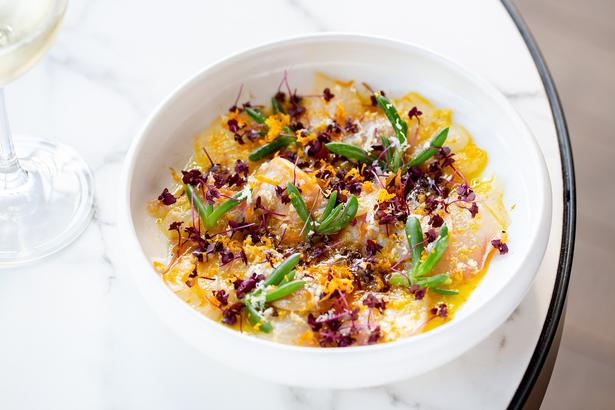 The menu pairs high-end proteins — lamb, game, seafood — with unexpected condiments. A venison black pudding was infused with woody spices and served with persimmon, a tuna crudo was garnished with a subtle preserved mandarin.

That raw fish was an exercise in purity and restraint — I love a chef with the confidence to pour great olive oil over fish and not much else. I noticed a tiny, bright green puddle of that oil on a creme dessert later and it was perfect there too. A whole flounder was incredible, with an oven crust on the bottom, a chardonnay butter sauce and plenty of mash.

Even the vegetable sides are an exercise in temptation: although neither sprouts nor cauli will often show up on the front cover of a magazine, it is hard to resist them under a translucent sheet of lardo or with walnut on a base of blue cheese. 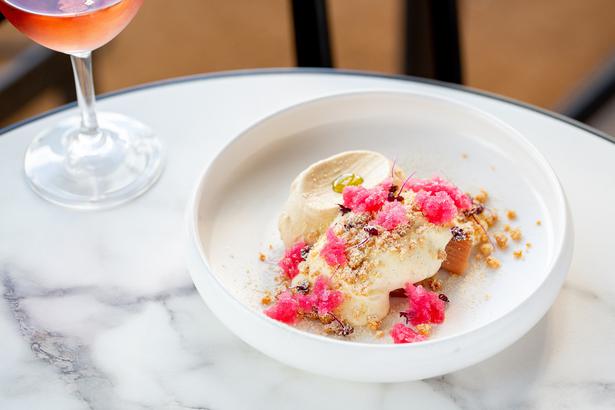 So who was this chef? By this stage I was pretty keen to know. Well, he’s Regnar Christensen, who spent the past few years at Ortega Fish Shack, one of Wellington’s top two or three restaurants. I don’t know how this guy ended up working in Auckland without a citizenship ceremony and a parade but now he is here, overseeing a small kitchen army with a quiet coolness that does make him look like an out-of-towner.

READ: Jesse Mulligan Reviews One Of Auckland's Most Stylish Bistros

And look, I don’t want to tell the owners their business but they really should handcuff this guy to the gas hob a la Handmaid’s Tale season two, minus the torture but just to let him know that Gilead Takapuna is his home now so he better not be caught daydreaming about his old life in the capital.

Further investigation reveals that the owners have some pedigree too, having run Madam Woo’s, Baduzzi and Rata as well as some big name places in Melbourne. Honestly, if this place was on Ponsonby Rd it probably would make the front page of the paper. I’m sorry it’s taken me so long to tell you about it, but now you have no excuse.