The Grove, owned by Michael and Annette Dearth, is 10 years old and right now, it's shining brighter than ever as a beacon of the best of dining in our city.

Sophisticated and elegant it may be, but it also manages to feel charmingly casual and diners have discovered there's no reason to save this restaurant for special occasions - we were there on a Monday night and it was humming. Perhaps the refurbishment has freshened it up - love that white spindle furniture and pastel linen - but it feels more like a coming of age to me.

This is a kitchen that has had nothing but stellar chefs through it and Ben Bayly, who has been there for five years now, is proving an absolute superstar. His flair for flavour and form combined with the Dearths' penchant for amassing a wine list of stunning New Zealand and international wines, has seen the restaurant pick up award after award. Their collective focus is on providing the relaxed, yet highly proficient, level of service often seen in more tip-driven dining cultures.

Not satisfied with basking in the glory, they've recently made a major shift in introducing a prix fixe concept to dining at The Grove. The menus, three, five or nine courses, come at a set price (and very reasonable they are too) with free rein to choose anything from the menu. Anything.

You get to put your meal together as you please. Knowing how fabulous they are, I briefly toyed with the notion of ordering Bayly's sweet souffle for all five courses. My dining companion slapped my hand and told me to be sensible. I'm glad she did because I'd have missed out on four of the most sublime dishes I've eaten recently. First, a terrine so beautifully presented that at first I was afraid of disturbing the perfect patchwork of colour, yet I was rewarded with mouthful after mouthful of spring.

Bayly balances the richness of unctuous goose liver, chunks of hare and pigeon and soft leaves of salmon with spears of asparagus, a leafy tip of basil that bursts its flavour all over your tongue and ribbons of cucumber.

It ought to be too rich with all those different proteins, but somehow achieves the perfect balance between decadence and seasonal breeziness. The wine match, lambrusco, a sparkling red from Northern Italy, is served in a dainty glass reminiscent of Gatsby-esque parties.

The problem with starting off with such a strong dish is there's usually only one way to go. But at The Grove, that way is up. Puff pastry in a wild mushroom tart was delicately crisp, and the woody flavours of the mushrooms, some pale and straw-like, others dark and meaty as Marmite, were sublime.

Terrine of game on the menu at The Grove. Photo / Babiche Martens.

A pile of crisp celeriac lightened the serious richness of the dish and soft baby leeks and leaves of rainbow chard took us off the forest floor and into the garden. Another dish, of white asparagus, was served with the tiniest ravioli of pigeon and candied parsnip with bright green broad beans.

Three courses in and it was undeniable that Bayly is on the ride of his life, with the dining public, the lucky passengers. Each plate is complex to look at, but easy to devour.

A rack of lamb is baked in hay imbuing the meat with a grassiness and slight smokiness, both of which flatter the sweet, rosy lamb. On the same plate are croquettes, or kromeski as Bayly prefers to call them, of goat and there are olives, crisp cauliflower and silverbeet too. 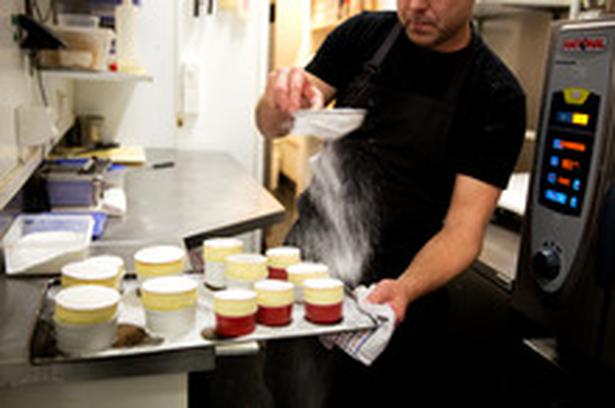 The passionfruit and chocolate souffles on the menu at The Grove. Photo / Babiche Martens.

Finally came the souffles, one passionfruit, the other chocolate, freshly baked, served billowing and piping hot. My preference? Don't make me choose. Let's just say that next time I may just have to go for nine courses to get those five repeats of the souffle in.

The Grove, a decade on, is hot new property.

* Have you been to The Grove? Share your dining experience in the comments below.