My plan was to check out the new Euro for dinner but when I showed up they appeared to be in the late stages of a rowdy wedding. It was pandemonium: a DJ was playing loud techno music, businessmen were dancing. There were no staff visible.

I only realised it was a Melbourne Cup party when I looked closer at the guests, who were bearing all the trademarks of this special Tuesday in November: beautiful dresses, shiny suits, expensive makeup, and the overall vibe of having been recently trampled by a galloping team of horses.

We left and wandered about the neighbourhood looking for a suitable replacement and eventually arrived, wearily and without much optimism, at The Lodge in Commercial Bay: a restaurant annexed to a menswear store, with a menu by a great Kiwi chef who lives in America. At least there’s no Melbourne Cup party, I thought, as we sat down next to a floor-to-ceiling window. But Commercial Bay was in fact holding one of those parties upstairs and, as our oysters arrived, a woman in a tiny, glittery dress strode out of the lift on the other side of the glass. She was heading home, but when she saw us she stopped, walked to our window and carefully pushed her nostrils against it. Then she sank slowly to her knees, maintaining eye contact with us and nose contact with the glass for the entire descent.

“I hope I remember this moment to write about in the review,” I said to Allan.

“Why don’t you jog your memory by taking a photo of the smear?” he suggested.

I order the flattened chicken breast. It, like everything else on the menu, was very delicious. Kim Knight, reviewing The Lodge for Canvas, noticed a little unevenness in the cooking but, a few months later, it’s all flawless. And here is why: it turns out that consultant chef Matt Lambert, of New York’s celebrated Musket Room, has returned, quietly but permanently, to New Zealand. It’s a bit like Peter Gordon moving home without telling us, and foodies should be dancing in the streets about this news. He is now full-time at The Lodge, and has big plans to turn this into a destination restaurant. 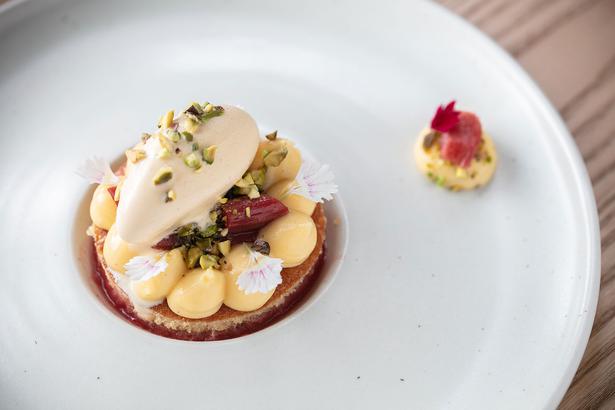 You can see him when you look into the open kitchen, but you can also see the effect he’s having on the kitchen staff, who buzz with a young positive energy and must be learning so much every night from the Michelin-starred master. His genius, as far as I can see it, isn’t the cutting-edge wizardry but the consistency, respect for ingredients and extraction of maximum flavour from each component of the dish.

He came to our table early and when I asked, “What do you suggest from the menu?” he replied, “Everything.” I’m used to hearing that from waiters eager to impress but for a chef to confidently invite a reviewer (I was spotted, having interviewed him a few years ago for this magazine) to eat whatever they want, is exceptional.

And although I said he wasn’t a wizard, he is something of an artist, creating beautiful plates of food that almost look too good to eat. The entrees were particularly striking, with colourful pieces of fruits, vegetables and proteins arranged in a palette and sprinkled with tiny flowers. The raw kingfish tasted as good as it looked, spiked with roasted apple, herbs and, unexpectedly, bacon. The beetroot for me could have used something savoury like this — it came with pressed mandarin segments and not enough buffalo curd to fight against the sweet acidity that dominated the dish; I missed the goat’s cheese and nuts that would usually come with this sort of combo. The mains are great, including that chicken, which is pressed hard against the skillet, skin on, until it crisps up like a well roasted bird. It’s been completely boned and must be almost half a chook, because I had to stop half way through and get it bagged up to take home. The waiter was right: this is chicken for people who believe you shouldn’t ever order the chicken.

The sides taste good, the steak looks great, and I also recommend you make room for dessert. Oh and, please, a little middle course of pasta. Ours was a perfect cacio e pepe and made me feel as if I were in Manhattan, where only the best will do and where, if you didn’t serve up the absolute best possible version of a simple dish like this, you’d likely be run out of town.

The wonderful wine list is by Cameron Douglas, with even more imagination than usual — try a glass of the Greek white, which is unique and fabulous.

And don’t pay too much attention to the dish details above because by the time you’re reading this the menu will have been overhauled. I wanted to write about it anyway because it’s already clear that no matter what exactly is on offer, this is Auckland’s new priority place to eat. What a privilege it is to welcome Matt home. Drop in and enjoy what New Yorkers can now only dream about.