This might be the largest restaurant I’ve ever been to: a massive shed on the waterfront with several different dining zones and possibly a couple of time zones too. If you happened to be there on the same night as someone you knew you wouldn’t be at all surprised not to see one another. You’d have about the same chance of bumping into them in Paris.

When a room this size isn’t full, people tend to congregate in one place and so it was on the night we visited, with a hundred or so people all along one wall as if the floor had a slope and they’d started out evenly distributed then slowly slid down to one end over the course of the evening. We took a seat outside in the warm evening light and delicately browsed the cocktail menu while, in front of us, a woman stumbled out of a corporate party next door and vomited on the wharf while a colleague rubbed her back and held her hair back off her face. Ahh, Christmas. You could do worse than end up at Wynyard Pavilion with your crew — the food is much better than average and the drinks come pretty fast. I probably wouldn’t bother with the cocktail menu unless your boss is paying though, and the wine and beer list is a bit scant. There’s probably something for everyone but nothing at all memorable: the drinks you offer when nobody is paying much attention to what they’re drinking.

Along one end of the building is a kitchen where they are working very hard and doing a smashing job of feeding the masses. It’s a huge menu and not all of it works perfectly but most of it is more delicious than you have any right to expect in a bar this size. We started with raw oysters, which were plump and cold, although we never found out where they were from and the dressing was maybe a little over-engineered — champagne vinegar granita, cucumber and, I think, coriander, all of which demonstrated a level of technical ambition that wasn’t quite required with the world’s most deliciously simple dish. 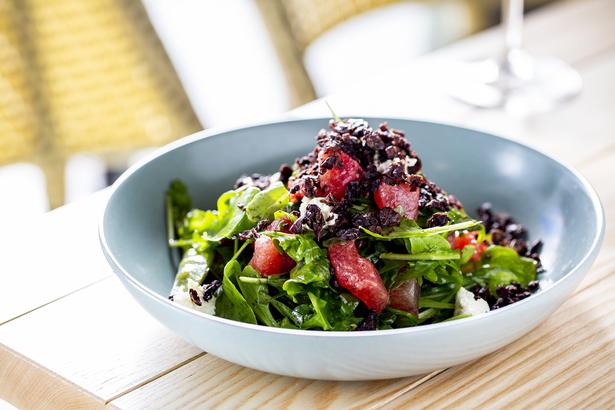 The compressed watermelon salad on the menu at Wynyard Pavilion. Photo / Babiche Martens

Mind you “the chef does too much” is not the worst complaint you can make and in most cases he or she got it right.

As with the compressed watermelon salad, a lovely summer dish where everything is exactly right. I don’t know who the first person to compress watermelon was but it’s an act of genius, intensifying the flavour and removing the watery filler (someone once tweeted “the worst part of a watermelon is like the best part of a cucumber”, which I think about all the time, even if I’m not 100 per cent sure what their point was).

READ: Number 5 Is Not The Same Restaurant You May Have Visited In The 80s

But that act of cheffery isn’t even what makes this salad, nor is it the feta cheese nor the little olive tapenade that is scattered throughout. It’s the greens — so often a supermarket standard filler at even the best restaurants, here it is a fresh and generous selection of leaves with some unadvertised snow peas folded in for crunch. It seems like a small thing but it’s taken so long for the salads you get in restaurants to catch up with the incredible creations we see in recipe books. If you brought this to your family Christmas lunch you’d be rightly feted for the rest of the afternoon. There was another beautiful salad on the menu — grilled stonefruit with prosciutto. This would have been the first thing I mentioned probably except that the ricotta it came with was fridge cold. I guess when you’re prepping 100 dishes for 800 people you can’t have everything sitting out ready to go, but it turned the dish from a three-ingredient masterpiece to a something that was only almost there.

As with offal, I always get the whole flounder when it’s offered, because I worry that if too few people order it the chef will have second thoughts. It’s a really good one here (not quite the level of Celeste’s genre-defining creation, but close) and while we’re celebrating the classics you’ll enjoy the beef carpaccio, which is crimson, delicate and perhaps just a little overwhelmed by the special sauce and pickled shallots with which it’s dressed. To avoid the cluster-fudge of trying to get an Uber to Jellicoe St on office Christmas party night, we instead walked a couple of blocks down Halsey St away from the crowds. Wow. Have you wandered through there recently? It’s like a different city — the roadworks gone, the apartments occupied and a new feeling of safe, waterfront living with exciting new businesses springing up in the gaps between buildings. North Wharf belongs to the locals again, and Wynyard Pavilion is doing its part by supporting a weekly farmers’ market and a dog walking club. Good on them for doing a difficult eating genre well, and adding some life to this growing part of the city.