It was so unexpected. Sure, I'd noticed the Stafford Road Wine Bar perched on a corner in Northcote Pt for all the years it's been open - more than four - and duly noted the awards merited to the adjacent specialist wine store, Point Wines, but I'd never actually crossed the threshold of either.

Then I heard the news that the owners, Simon and Jacquie Mackenzie, had appointed a new chef who hailed from Meredith's and Sidart and that things had notched up a level in the food department.

By adding "solo plates" to the list of shared ones, the charming neighbourhood wine bar was now offering more than a mere bar with nibbles, a place for the locals to frequent, a quick stopgap for cinema-goers . . . I just never guessed at how much more.

The menu reads like a novel written by a promising new author - rules are broken, caution is thrown to the wind, freshness prevails.

It could all have just as easily not worked out I suspect but, truth be told, the unlikely pairings don't stand a chance of doing anything other than getting on famously in the hands of chef Ed Verner. The flair he shows is phenomenal. 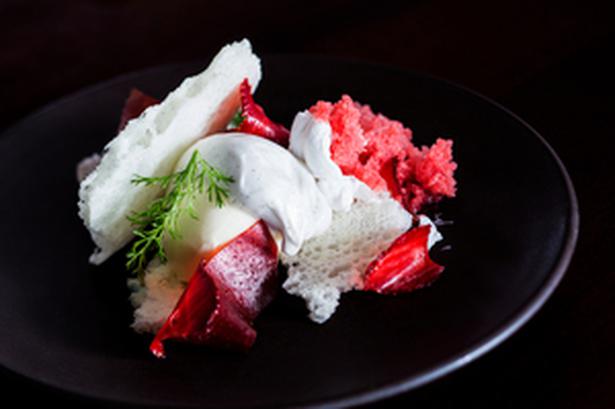 They weren't good, they were perfect - in concept, form and flavour. Grilled cucumbers followed; we smothered them in the smoky eggplant puree and with every bite we marvelled at the juiciness of warmed cucumber.

Then came one of the prettiest dishes I've eaten in a while - small spheres of tangy goat's cheese and walnuts, crumbed and fried golden, then served on a sweet pear puree (yes, arguably Verner is overly attached to purees but with each one so different and all delicious we weren't minding a bit) and glistening honey base, topped with crisp wafer-thin discs of pear and scattered with blue-purple borage flowers.

It was hard to pick a favourite from the shared plates but perhaps the last in the line-up was it for me: crispy boned-out chicken wings, dusted with black garlic and served with a dollop of exceptional sour cream (again, made in-house) and curls of white frilly beef crackling for added texture and scrumptiousness.

Scampi, in the first of our main dishes, literally melted in our mouths, and serving it with warm duck prosciutto, shiitake mushrooms and asparagus was a clever collision of flavours but it was even more magically brought alive with the addition of toasted, puffed black rice.

An artichoke puree, with its hint of aniseed, underpinned a plate of summer vegetables that had been meticulously prepared while still managing not to appear fussy. The star of this plate was the jersey bennies, lovingly peeled to get rid of their slightly acidic skins so that nothing interrupted their creamy flavour.

On another plate, wild venison cosies up with dark leaves of seasonal greens in a puddle of sweet, rich onion stock, and stark white goat's curd serves its purpose of sharpening it up.

When it came time for dessert there was only the one option left and there only needed to be; rose-scented sorbet, watermelon granita, strawberries dehydrated to rich, chewy fruit leathers, a cloud of whipped marshmallow and an incredible milk wafer that tasted like milk bottle lollies. It was like eating the best dream you've ever had.

I hadn't wanted a late night but the time had flown in a merry-go-round of fresh, colourful plates of original food that had utterly captured our imagination.

The effort shows in every small detail of the food at Stafford Road Wine Bar - from the lightness of the sour cream and brioche, to the vegetables sourced from the garden out back, to the Jersey bennies, which are peeled because it makes a difference to their flavour, to the asparagus which isn't because it doesn't.

There's a reason why, after four-and-a-half years of writing this weekly column, I'm still honoured and thrilled to be doing so - it's discovering, on quiet neighbourhood corners, brilliant places like this that are worth shouting about.