White Rabbit needs to pull something out of the hat, says Jesse Mulligan The beef wellington ­— order in advance from White Rabbit on the Park. Picture / Guy Coombes.

Don’t let anybody tell you that Auckland has a crime problem. I don’t know what’s wrong with me, but when my friend Josh and I went to White Rabbit on the Park I accidentally left the door of his vintage Mercedes open for the whole time we were inside. By “open”, I don’t mean unlocked.

I mean, like, open. I forgot to shut the door to his car. And, sure, Union St isn’t exactly Hunters Corner, but “an unlit industrial connector road next to a motorway off-ramp” is not the sort of place Lonely Planet tells you to stick to in an unfamiliar neighbourhood.

Yet, when we returned, the car was untouched. Josh’s sunglasses, stereo and numerous personal effects were in the same place he’d left them (back in 2005) and, despite the hazard lights blinking rapidly to advertise the free car to actual or aspiring criminals, nobody had taken the bait. We drove home with a renewed faith in humanity — at least, I did. Josh’s faith in me was at an all-time low, so I made extra sure to close the door when he dropped me off — particularly difficult given that he was driving at high speed. It had been a long night at White Rabbit. We’d arrived at 7pm, then received an entree at 8pm, a main at 9 and a dessert just before 10. There were a few problems with the food, and we’d both eaten too much of it anyway, so our final minutes at the table were filled with regret and self-loathing. Is anyone ever pleased they ordered dessert wine? I woke up the next morning with a sugar hangover.

My specific comments should be prefaced by the information that when I visited, the restaurant wasn’t open yet. They’d been serving food at full price to paying customers for a few weeks, but the manager and, afterwards, the PR were eager to impress on me that they weren’t “open open”. I think the implication was that it was too early for a review, and perhaps they were right — but I don’t think you can take that much money off that many people and not let us talk about whether it’s any good.

White Rabbit takes over the space formerly occupied by the Matterhorn, an incarnation that didn’t even last long enough for me to review it. Before that it was Libertine, which I did review, twice, coming to the conclusion that the decor was nice but the food was marginal.

The decor is still nice and they’ve brought the architect back in for further changes to the layout. A bar next to the entry way is now closed off into its own cosy little pod and, around the corner, what I think is a new private room looks like a first-class place to sequester yourself with a large group of friends behind big wooden doors. 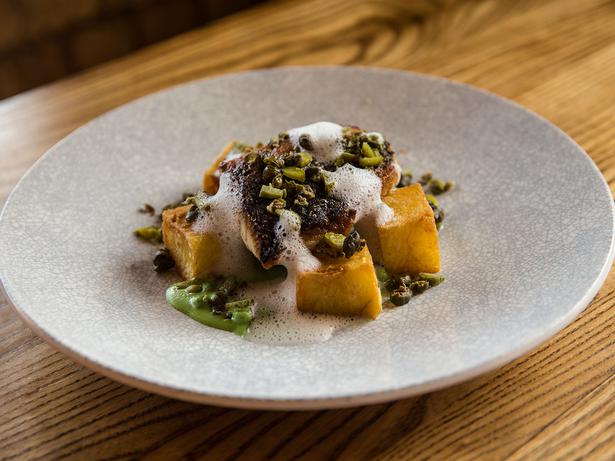 The market fish from White Rabbit on the Park. Picture / Guy Coombes.

The toilets are much improved too, with a facelift and the removal of a mounted soap bar which protruded from the wall like something you didn’t want to rub vigorously with both hands. One of the big design flaws is still there though — dirty dishes are loaded back into the kitchen through an eye-level pass on the way to the bathrooms, so you can’t take a pitstop without walking past several plates of somebody else’s room-temperature leftovers. If there really is no other place to put this unpleasantly functional part of the restaurant, they should work harder to clear the dishes.

The menu is being overhauled as I type, but the beef wellington will stay on — you have to order this in advance, though I wasn’t given the option when I booked on the day of dining. Perhaps they need more than 24 hours to make it, or perhaps they just forgot.

There were some good entrees, like a duck two ways comprising a lean piece of meat and a near-illegally rich parfait. But the mains were underdone — a piece of scotch served so rare the pale vein of fat stayed chewy and globular. A piece of fish wasn’t fully cooked — raw enough that you couldn’t cut through it. And the side plate of beetroot was undercooked too — the first time I’ve ever experienced that in a restaurant.

And all of it was underseasoned: that had a particularly big impact on the steak, which came with an overly sweet jus and could have used some balance elsewhere in the dish.

So maybe the new menu doesn’t feature meat or fish and all of these observations will be irrelevant. Either way, I hope they can pull a rabbit out of the hat and turn this into something that lives up to its promise.

Raising the Bar for Food and Wine