It wasn’t even particularly sunny, but sitting in the modest mid-winter heat overlooking a vineyard, downing a glass of bubbles and devouring morsels of fried goat’s cheese was my idea of as-good-as-it-gets.

I was fairly used to my own company at this stage, having spent the past three days in the outskirts of Victoria on a romantic getaway for one, without even a megabyte of mobile data. The conversation had run a little dry, but I had so far managed to keep myself occupied with good food and even better surrounds.

I had been contentedly waiting for Martin Webster, the head chef of Montalto Vineyard and Olive Grove, to give me a tour around the estate gardens, where he sources seasonal produce to serve on the tables. There’s an abundance of rhubarb at the moment, he explains, so a number of dishes on the menu contain the tart plant — including a deconstructed crumble for dessert (which I later took delight in sampling).

On-site gardens overgrowing with wild flowers, kale and broad beans are a running theme around the Mornington Peninsula, evidence that Victoria, like many of the top establishments in Auckland, has caught the “seasonal and wholesome” bug.

The same can be said of Hummingbird Eco Retreat; living off the land is at the heart of this sanctuary, with generous gardens fuelling a cosy restaurant. This location is the antithesis of an inner city stay: the sleeping quarters are rustic cottages covered in creepers, surrounded by what can only be described as the most cliched Australian wildlife — squawking parrots, choirs of frogs, and even a couple of kangaroos that go bounding past my window.

Here I’m encouraged to disconnect from my smartphone and laptop, and instead enjoy meditation and yoga, although it’s hard to switch off when the WiFi password is so easy to guess.

A visit to the nearby Peninsula Hot Springs does the trick — it’s harder to check work emails when your fingers are wrinkly from thermal pools. On arrival, I’m handed a white towel with a matching white robe to throw on and off in between testing out the many wellness-focused facilities, including a refloxology walk, Turkish steam bath and cave pool.

In search for a picture worthy of Instagram (to be posted later), I head straight to the hilltop pool, which boasts 360-degree views over the peninsula. Although it’s too crowded even for my party of one, it certainly gives the view from the top of the waterslide at Parakai Hot Springs a run for its money. 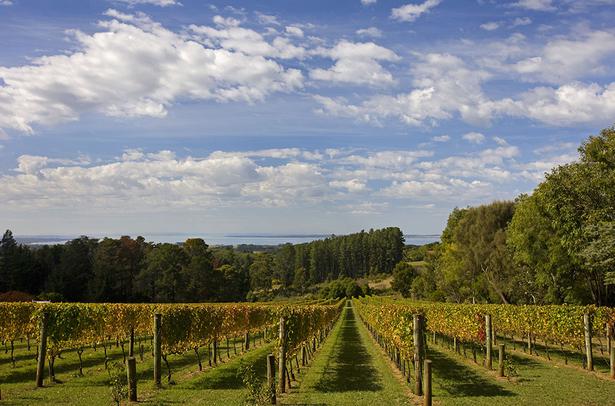 Feeling a little too cleansed and wholesome after a decent soak, it seemed only fair to discover what the region is most well-known for: vino. One of the most talked about spots among locals is Ten Minutes by Tractor, which is the result of three separate vineyards that are — you guessed it — only 10 minutes by tractor apart.

There’s a reason this place has such an exceptional reputation: the staff dance around the restaurant as if in a choreographed routine, and I opt for the eight-course degustation as an excuse to witness them in action for longer.

Although I’m driving, the sommelier insists I have the wine matches too, the compromise being a small drop to accompany each dish. Each is better than the last, from the salmon and quinoa starter to the whole-roasted quail, and if you’ve ever had trouble meditating, this is the perfect way to clear your mind — spending four hours at a table alone devouring food allows for more than enough breathing space.

After what can only be described as wine-tasting fatigue (I also went to Max’s at Red Hill, and earlier to the famed Oakridge in the Yarra Valley) a pleasant alternative was the Horseback Winery Tour, which required neither knowledge of wine nor horse riding to be enjoyable.

My horse, a tan-and-white fella named Dougie, had a penchant for snacks and veering off track, but he mostly ran in the same well-oiled manner as the rest of the troop. Again, I was discouraged from using my cellphone as I was risking it being trampled under hoof, but this no longer fazed me — I had grown accustomed to an existence without cellphone coverage.

Then and there, I considered deleting my Facebook profile. Maybe I’ll never Instagram again? Who needs Snapchat when there’s the sound of your own voice?

Needless to say, that knee-jerk reaction didn’t last long, and it was foolish to think that I could sever my online persona so easily. But it was nice to become disconnected, if only for a few days, and even if I had to travel a few thousand kilometres to appreciate it.

Whether you’re new to backpacking or a seasoned globetrotter, you shouldn’t put away your passport just because you've started ...