Sarah Thorpe of Mint As in Ostend. Photo / Alice Doig There’s a food revolution happening on Waiheke, and it’s on wheels. an eclectic mix of food truck operators are bringing a wealth of cultural diversity — and deliciousness — to the island’s food scene

"Chefs are deciding to have their own food truck rather than work in a kitchen environment which can be really stressful,” says Lyndal Jefferies, who has operated Revolution Juice, a mobile juice truck, for six years on Waiheke Island. “[Many of them] are immigrants to New Zealand who are making their traditional food and putting it out there which is fantastic.”

Food trucks are indeed popping up around the island; between them these chefs share a wealth of culinary talent, having earned their stripes in places like Depot, Mudbrick, The Oyster Inn, and Tantalus. The result? A food truck scene that’s not only delicious but also multicultural, with flavours of Sri Lanka, France, and Italy dotted around the island.

In 2018 Suzanne McDowell and her partner Keith Burney — owners of Waiheke Specialty Foods at 28 Poto Rd — bought a mobile kitchen and set it up outside their shop. In addition to servicing events in the store, they lease the kitchen, giving aspiring food truck chefs a platform to test their product. One chef, Indika “Indy” Bombuwala, did just that and now has his own successful food truck. On Wednesdays Yenny Hartini — also known as “Mama ” — uses the mobile kitchen to serve up authentic Indonesian classics finished with fiery homemade sambals, earning her a local cult following. 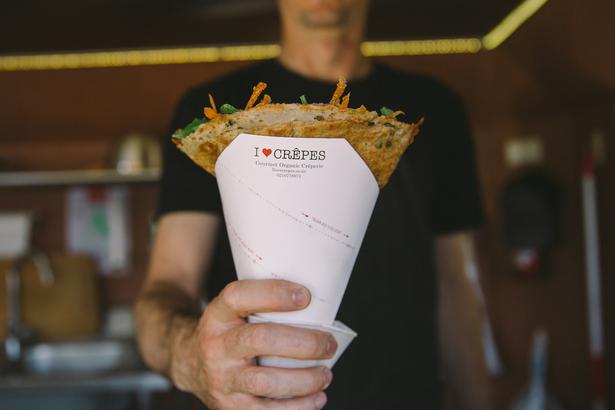 Together they launched “Poto Hub”, a street food festival of food trucks and stalls that takes place on the second Thursday of each month, with live music, beer, wine stalls and even a mojito bar. The festival has gained momentum, and over the summer holidays they’ve added extra summer dates (next up is February 26) to gain visibility with the summer crowds.

READ: Baduzzi Hits The Road With A New Food Truck In Point Chevalier

“We do this for the community,” says Tamara, a Chilean and pastry chef. “To have fun and help other families. Behind every truck and stall is a whole family and lots of effort.”

“It’s adds a different layer,” adds Lucie, a native of Czechoslovakia. “Not everybody wants to sit at Mudbrick and watch the beautiful view and pay a couple of hundred bucks.”

Sarah Thorpe started Mint As after working as a chef on the island for 15 years. “I always knew I wanted out of the restaurant scene and into own my own food truck,” she says of Mint As, located outside the Raw food market.

Her nana Joy helped her fund the food truck, so she named the “Joy Burger” after her. “She is definitely my number one fan,” says Sarah. Her best seller? The “American Dream” burger, complete with melted cheddar, pickles, crispy onion rings and mustard with flame-grilled beef brisket patties.

But perhaps what has the island salivating the most are her crispy prawn and lime tacos. “Our customers start ordering them for breakfast at 9.30am when we open,” she says. 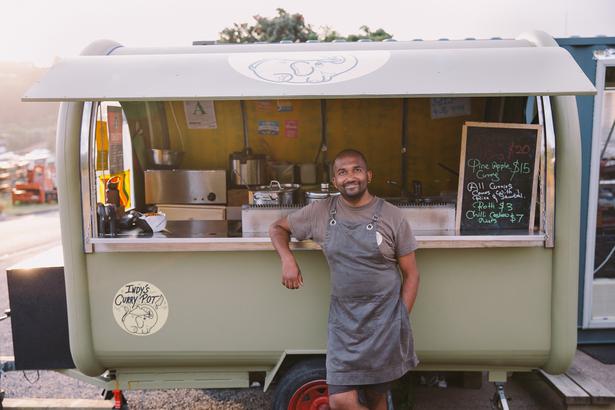 Indy came to New Zealand in 2013 from Sri Lanka. While studying culinary arts at NSIA in Auckland he worked seven days a week, often with several jobs on the go, building up an impressive CV with experience at Molten, Baduzzi, Ebisu and Depot.

In 2015 he visited Waiheke for a wine tour with his cousin from Sri Lanka and fell in love. “It felt like Sri Lanka but without the coconut trees,” he says with a laugh.

Indy started a Facebook page about Sri Lankan food and soon found a following among Waihekians — and requests for small catering jobs came flooding in.

He went to work for chef Bronwyn Laight at Te Motu and followed her to Three Seven Two on Onetangi Beach in 2018. “It was really educational for me, I was always observing, it was like a meditation watching her plating,” he says.
Indy started renting the mobile kitchen at Waiheke Specialty Foods on Monday nights and became an immediate hit on the island. He took a leap of faith and purchased a food truck of his own from an old friend at Depot and launched Indy’s Curry Pot full time.

Does he miss restaurants? “I’m everything now, the chef, the dishwasher! But it’s fun. I’m happy.” 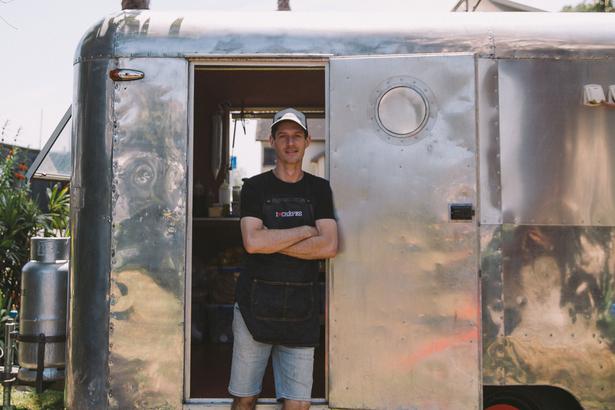 KEERTI LEROY, I LOVE CREPES
Oneroa
“I grew up in the UK and there was a creperie at the end of my road; I always loved the food and as I got older I noted how busy that little creperie was and from such a small footprint, and thought it was a good idea,” says Keerti Leroy of I Love Crepes.

Leroy grew up to become passionate about food and health and particularly the organic movement. After a visit to Womad — where he was disappointed by the absence of organic food vendors — he was inspired to start his crepe and galette truck.

He started in Australia before bringing his truck to New Zealand in 2008. Ana Schwarz and Geoff Tippett of Island Gelato noticed him outside Waiheke Specialty Foods on Poto Rd and convinced him to move to Oneroa in an empty space between their ice cream container and The Oyster Inn.

All the crepes are organic and vegan; light and delicious they keep the locals and summer crowds coming back for more. “I could tell you the recipe, but then I would have to kill you!” Keerti laughs. Located next to the Mint As food truck just outside Raw foodmarket, Il Caretto — Italian for ‘The Little Cart’ — offers Waihekians a taste of Italy. Veronica and Enzo fell in love 10 years ago in their native Italy, working together in a restaurant in Genoa, and after marrying they decided in 2014 to move to New Zealand. Veronica recalls that it was “love at first sight” when they arrived.

The couple both joined Mudbrick; Enzo as a chef de partie and Veronica as restaurant manager at The Archive Bar, the more casual sister restaurant. Enzo went on to join Tantalus as a junior sous chef in 2017. Two years later the couple decided a life change was in order and launched Il Caretto.

Eleven months later they have a loyal following of locals who go for their croissants and coffee in the morning; handmade pasta for lunch, and their signature handmade gnocchi which has become a crowd favourite. 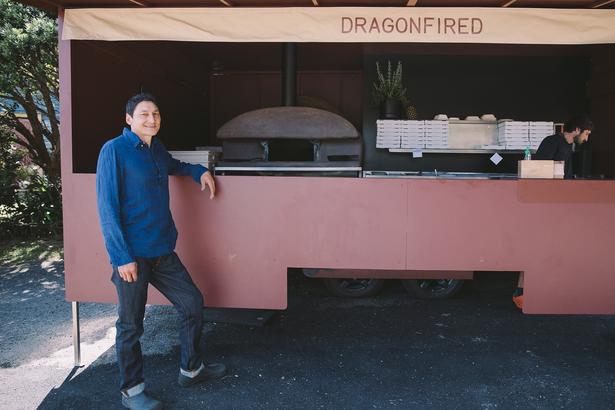 When Monocle editor Tyler Brule visited Waiheke, he noted in his Financial Times column that Dragonfired’s pizza at Little Oneroa Beach was the highlight of his stay.

Bevan started off doing only pocket breads. “It was against my food philosophy to do a pizza,” he remembers with a laugh.

“So if I had to make a pizza I wanted to use the best ingredients.” A man of his word, Kaan uses only organic flour as a base, and sources his ingredients from artisanal producers.

Though Dragonfired was a true food truck pioneer on Waiheke, Bevan doesn’t want to claim being the first.

“I think I’m the second,” he laughs, explaining that in island folklore a food cart existed at Matiatia Wharf “back in the good old days” when the ferry Baroona sailed once a day to the city.

Is he here to stay?

“The island is definitely changing fast,” he says. “I don’t feel I need to go anywhere, the world is coming to us.” 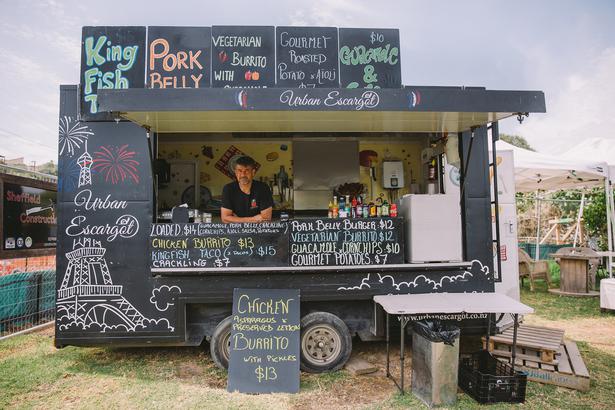 Nico Fini has been a fixture of Waiheke’s catering scene with his business Urban Escargot since he moved to the island from Christchurch in 2011 following the earthquakes. A native of France, he trained in some of the most exclusive restaurants, including a three-star Michelin restaurant.

Nico has used his food truck around the country for 23 years, and since moving it to Waiheke uses it to cater at weddings and parties. He remembers his first New Zealand festival with the truck — the Wild Food Festival in Hokitika.

“So much fun, the menu was lamb shanks, escargot, and lamb brains ice cream, Viagra cookies. Crazy stuff,” he says.

In September Nico moved his truck to Onetangi for the summer, and is open seven days 10.30am to 7pm. “It’s pretty full-on, especially as I cook my own bread and all products are home-made,” he says.

Operators Joel and Nathalya Larson make their salsas and pickles from scratch. “We missed the taste of fresh tortillas and started looking for fresh masa in New Zealand. We were surprised we couldn’t find it, so we started researching and testing recipes to make our own.” If you have a sweet tooth head to Waffles by Lilith; it has gluten free and vegan options to justify the calories.

Delicious empanadas can be found at South American Oven and stop at Langos, “Hungarian-style fried bread”, for some carb-loading. Some of these vendors also set up shop at the Sunday market in Oneroa. Waihekeostendmarket.co.nz