Two years ago, Kōkako Organic Coffee’s Mike Murphy hosted a third-generation coffee farmer from Papua New Guinea to show him where his organic beans wound up at the other end of the supply chain. The one thing Mitchell Ricky couldn’t get over about New Zealand wasn’t, ironically, our obsession with flat whites. It was the water. When you turned on the tap at Mike’s Kaipara home, water came out. When you turned on the tap at Kōkako’s Mt Eden roastery, same thing.

His disbelief has stuck with Mike, who also spent time with Mitchell in his home country.

“It makes you realise we’re really privileged to live in the society we live in, but we can take some learnings from Mitchell’s culture, beginning with how materialistic we are,” he says.

Mike had travelled to Papua New Guinea (one of several countries Kōkako sources its organic beans from), to see how farmers are improving their growing processes, and how the Fairtrade premium Kōkako pays was being put to use on projects toward better sanitation and access to water. What he couldn’t have predicted were the life lessons he came home with.

“You come back a better person, more humble. You realise that not being able to check your emails or your social media because you’re so remote, is not a big deal. And you recognise that it’s family values and living off the land and respecting each other and having laughs that are actually the most important things in life. That’s what it’s done for me.” 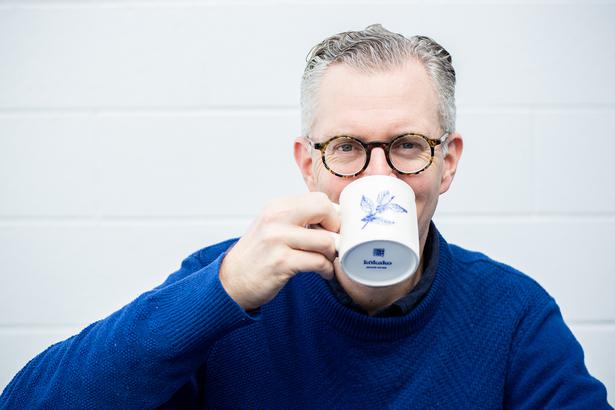 This month Kōkako turns 20, and the New Zealand specialty coffee roasters are celebrating.

The anniversary means a rare opportunity for Kōkako’s mild-mannered owner to step forward as the face of the brand. For two decades Kōkako has quietly become an NZ institution, and one of the first of its kind to embrace an ethos of sustainability through its commitment to organics, Fairtrade, carbon off-setting and recycling programmes, even at a time when they weren’t exactly on consumers’ radars.

When things open back up there will be an interactive exhibition on Karangahape Rd, taking visitors back to 2001 when Kōkako’s founders, Helen Olivier and Christian Lamdin, had a branded Morris Minor van in Aotea Square. A photographic timeline will illustrate those humble early days when Mike, inspired after falling down the laneway cafe rabbit hole in Melbourne, sought to start his own venture, realising it would be easier to take on an established business. After spying an ad in the Herald in 2007, he bought the couple’s business on Parnell Rd, when the owners decided they had other things — law, the arts — they wanted to pursue.

READ: The Best Places To Get Your Coffee Fix In Auckland

“The roastery was out the back of the kitchen and we did everything from there, which was crazy because there wasn’t enough room,” says Mike. “I was trying to drag 60kg coffee sacks past and the chefs would get so annoyed. And then having to roast at night because I didn’t want to get in their way.”

Two years after taking the reins he went through the process of publicly validating Kōkako’s organic coffee as such, along with the sugar and cocoa from their drinking chocolate, using official certification with BioGro and Fairtrade; his mentor Chris Morrison of All Good Organics and Karma Cola helping to guide him. It wasn’t cheap, and the thinking at the time was that it was an unconventional move. 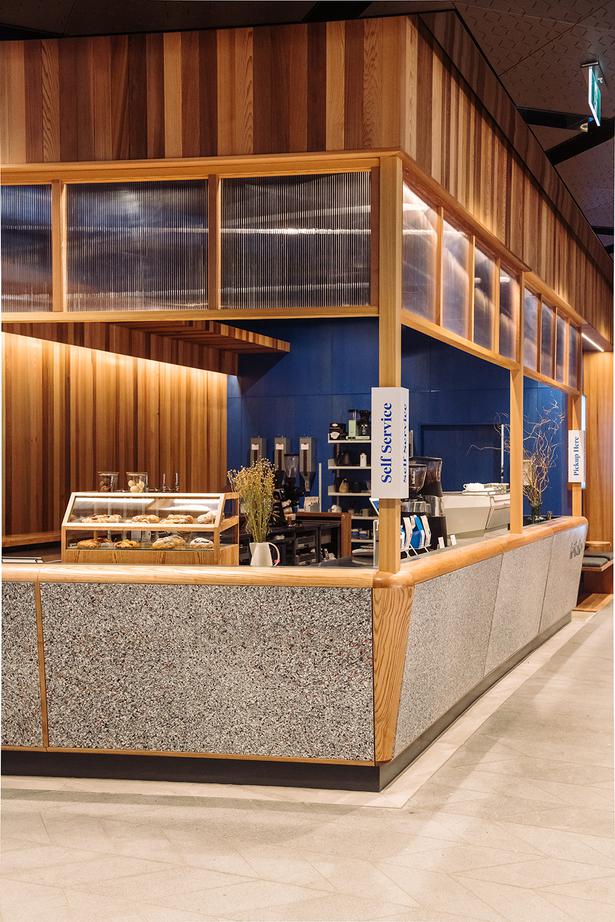 “I had another roaster I really respect say to me, ‘Why don’t you just do conventional coffee and not pay for your certifications? You’ll make more money.’ But that wasn’t about what we were trying to do. We were trying to be socially, environmentally and financially responsible. It’s never been just about driving as much profit as we can.”

Later came the establishment of their original flagship cafe in the old Grey Lynn post office (it has since become the Postal Service Cafe, and still sells Kōkako), and the converted mechanic workshop across the road where they did their roasting. A change of landlord in 2017 forced them out of the workshop and prompted the difficult decision to sell the cafe — they now have a roastery in Mt Eden.

READ: A Myriad Of Nice Mugs To Start Your Day

To interview Mike (pre lockdown) I meet him at their slick Commercial Bay coffee bar, inspired by similar spots in Japan and the US. You couldn’t get much further from the original Kōkako coffee cart, perched on what Mike calls the “geeky side” of its new flagship. As morning commuters wait for their cappuccinos by the espresso machines, Mike orders two of Kōkako’s specialty brews from a pour-over dripper, a single origin “soft-brew” from Peru that gets sweeter as it cools, and the Ethiopia Guji, with a sweet flavour to start.

As Mike explains, the single origins are much like single origin wines in that they have a more definitive flavour profile that speaks to the coffee’s provenance.

It’s tasting experiences like this that he hopes more consumers will enjoy as a respite from city life. The idea is that customers will not only linger over conversation but glean a greater appreciation for all the people involved in the coffee production chain. If that sounds a tall order, consider this: the passionate business owner has spent hours tracing all those involved in the coffee process, from the farmers like Mitchell in Papua New Guinea, to those who harvest the beans, process and dry them, to those who ship them to New Zealand. 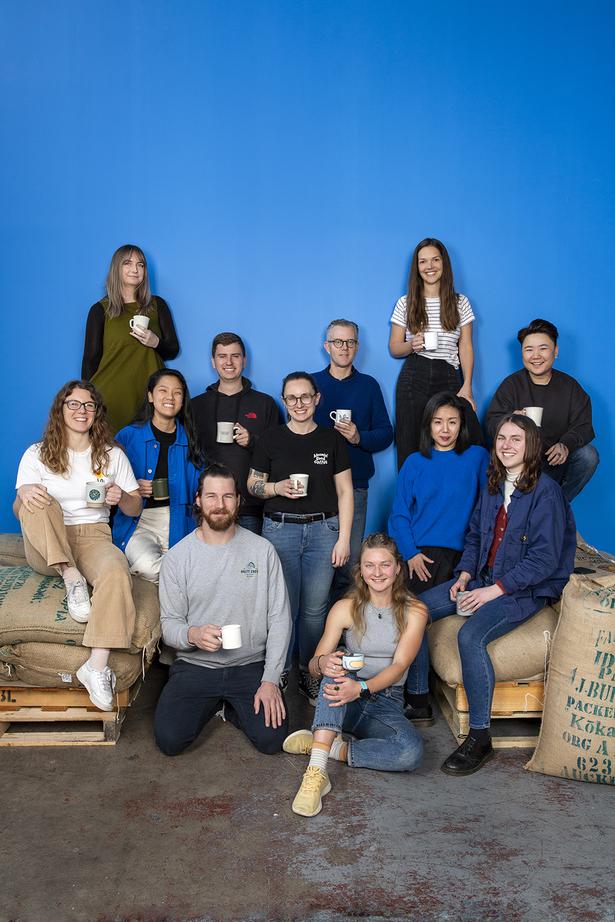 “If people understood the amount of work involved in making a cup of coffee, they would recognise just how lucky we are to have this product,” says Mike. Reflecting on two decades of Kōkako has also meant looking back at his personal journey, one that, at times, seems uncanny. At university he studied subjects like social geography, anthropology, coastal erosion, the indigenous cultures of the Pacific Islands.

“And I was really into it, but I was like, how am I ever going to use this? And here I am now advocating for the people in Papua New Guinea, not only their coffee but their stories and culture.”

He even wrote a paper on the gentrification of Ponsonby, “which is crazy because then I end up opening a cafe in Grey Lynn”.

Recently he’s wondered what shaped him to be so driven, recalling how the death of his father when he was 14 meant he had to grow up fast to support his mother and younger brother. He also knew little of the challenges he’d face in business, having taken on Kōkako at the age of 31, after working in hospitality from his late teens, and helping to open Auckland’s first Hell Pizza before heading overseas. Back then there weren’t the platforms for capital raising that there are now, so Kōkako was built on bootstrapping.

READ: How To Make Perfect Coffee At Home

“But there was also, on my part, a naivety to my commercial ambition,” says Mike. He had grand visions of running multiple cafes, and doing catering as well as developing organic coffee and food products.

“I was trying to charge a premium, which we had to for organic, and it was really hard,” he says. “And obviously getting through the GFC was really tough.”
He has since pared back Kōkako’s focus as an “eco-luxe” brand aimed at coffee aficionados with a conscience. He has also prioritised training and morale, and every week the team gathers for a “coffee cupping”, where the staff taste-test each brew that goes to market. A website upgrade is planned for October. Ultimately, Mike says he’s heartened by the way things are heading, with more consumers making purchasing decisions based on their values, as opposed to treating coffee purely as a commodity.

“And I think that if we can get people to think their coffee is not just something to get you through your day, it’s something to be valued, that drives respect for the people who have grown it.”

He recently ran a social experiment, whereby for one day, all takeaway coffees served from Commercial Bay were done so in mugs and reusable vessels rather than their compostable takeaway cups, the recipients asked to return them when they could. Every single cup came back — and though they haven’t repeated the experiment, it has reinforced a reassurance that Kōkako coffee drinkers are on the same bandwidth.

“It’s a really timely point for us to show that businesses can be an agent for change,” he says of their 20th birthday. “We can influence people positively about environmental or social issues that are happening in the world.”

Kōkako has re-established its cafe support programme. Purchase a bag of Kōkako coffee online and 25 per cent of the cost of the bag will go back to your favourite cafe as a credit to help them to reopen. Kokako has also just launched a lockdown recipe e-book with a selection of recipes from some of the cafes and restaurants Kōkako supplies. All profits will be distributed evenly among the recipe contributors. The recipe book is available from Kōkako.co.nz, purchased by way of koha. It features recipes from (among many others) Ada in Grey Lynn, OTT Patisserie in Birkenhead and Cotto on K Rd.

Coffee-Spiked Cake & Dessert Recipes To Get Buzzing About

Getting your coffee kick has never been so sweet