In a garden nestled high on a ridge in leafy Titirangi, with a backdrop of the glittering Manukau Harbour, a group of friends break bread. Except there’s not a crumb of wheat in sight.

The party, made up of mums and bouncing children of various sizes, instead tuck into plates overflowing with nature’s bounty — fresh figs, dates, big chunks of cucumber — as well as bowls of homemade almond hummus and beetroot dip.

Although the sweet embrace of fruit should be enough to satisfy anyone’s sugar cravings, there’s also an array of perfectly-portioned desserts available: lime coconut fudge, beetroot coconut oil cake and little ramekins of Mexican chocolate mousse (made with coconut cream, no less).

The discussion centres around what I assume is usual young-mum chat: feeding, teething, sleeping. One opens up about the hardships of juggling multiple children, another questions how to treat the prickly issue of censorship in a world of Facebook and Snapchat. All nod in agreement over mugs of hot coffee and home-brewed kombucha, rather than sloppy glasses of merlot. Ziggy the miniature apricot poodle sits listening, cocking his head.

While this spread is for a special occasion, it seems like the kind of banquet Eleanor Ozich could whip up daily, if her blog Petite Kitchen is anything to go by. Filled with gentle recipes and pictures of her sunny blond-haired children, the online diary provides a snapshot into her rather wholesome nuclear existence. 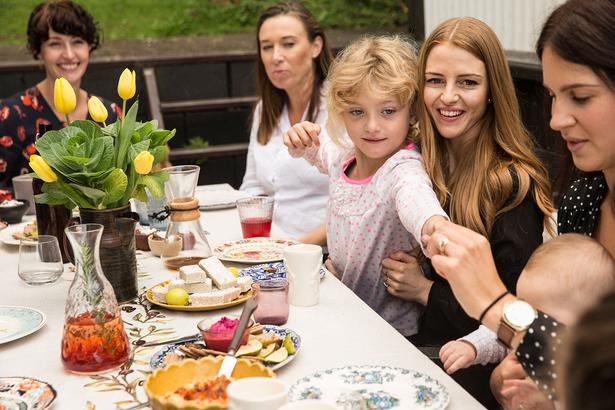 Visiting the immaculate home she shares with husband Valentin Ozich of I Love Ugly and their two (soon to be three) kids, it’s obvious her life truly is as good-for-you as it looks in the pictures.

Eleanor started her website four years ago, as a way of documenting her testing of recipes free of processed foods.

“It kind of started out as a journey to help [daughter] Bella’s eczema and stomach problems, which she had from her diet. We went to visit a naturopath and she said if you overhaul the diet, you should be able to fix it. At this stage, it was music to our ears — it just made sense, because we had tried everything, we’d been to specialists and doctors, and nothing was helping.

“I started documenting it on my Facebook page, by sharing recipes with my family and friends, and everyone was quite intrigued. It was in the early stages of when wholefoods started getting really popular.

“A lot of people were really interested, I think because heaps of other mothers were having problems with their kids, or had food intolerances.

“I honestly believe that that’s why [the blog] took off like it did — people wanting really simple, everyday recipes. Even if their kids didn’t have eczema or anything like that, they just wanted basic, everyday recipes that the kids would actually eat.”

After just six months, Eleanor landed her first book deal. It was hugely successful here, in the United Kingdom and Australia, and was even published in a German edition. Her third book, Sweet Delights, hits shelves this week, although this version is a little different to its predecessors: it’s more petite in size, and focuses solely on Eleanor’s true passion — dessert.

“Everything revolves around food for me, and I felt like it was the right time to do another one.

“I wanted to create something different as well — the other two were very traditional cookbooks, with breakfast recipes, lunches and dinners, so it was cool to focus on just one thing.”

She went down the self-publishing route for her latest book because of time constraints with the imminent birth of her third child. Due to limitations with print production in New Zealand, Eleanor found an agent in Korea and had the book printed there, with a glossy hard cover.

“It’s been really nice to have full control over the design and aesthetic, and my husband Valentine had a lot of say in that as well, to get it just as we wanted it. I’ve always had a vision of exactly how I wanted my books to be, so it’s nice to be able to create something that I just love.”

The recipes included in the book, like all Eleanor’s concoctions, are trialled in her home kitchen, and usually based on whatever she felt like making for her family that day.

“Even the recipes I do for the Viva website each week are just whatever I’ve had for dinner that day. I think that comes across in the recipes too — they’re really authentic and down-to-earth. “Most of my favourites are [dishes] I’ve chucked together at the last minute using whatever I’ve got in the cupboard.”

Eleanor has four generous garden beds at the top of her section, the crops from which she uses to fill her recipes, supplemented by trips to farmers’ markets at Oratia and Clevedon.

“I don’t actually shop at the supermarket, I only get things from there that I need to.

“When I do go, it doesn’t feel right to me anymore — especially buying meat and stuff like that, I’d rather go to the organic butcher down the road.

“Our weekends are spent going around to five different places to get everything we need. It makes you appreciate it much more.”

Indeed, every mouthful of the food in front of us — which is quickly disappearing — tastes like a lot of care and attention has been put into creating it. It’s rich and nutty, and dare I say it, wholesome.

This feijoa jelly is fabulous on a cheese platter

Five spots to try for a traditional tea break

Eleanor Ozich of Petite Kitchen shares her recipe for a delicious tea loaf.