"There’s nothing more depressing than an expensive fit-out where the food doesn’t measure up, but the tucker at Mumbaiwala is simply wonderful." Photo / Babiche Martens Sorry I’ve been missing for these last two weeks, I was struck down by a mystery coronavirus that somebody should really look into. I was well enough to be vertical, mostly, but obviously I kept away from restaurants and, homebound, was forced instead to review things I found at the back of the pantry.

Wattie’s peaches in syrup: “sweet but not cloying, great with Weet-Bix in an emergency”; salted capers: “I’m sure they’re nice but who’s organised enough to soak an ingredient 12 hours before they need it?”; jar of decade-old quinoa seeds: “soapy with an unpleasant texture. Why did we ever bother with this stuff?”

I was itching to get back to eating food cooked by clever people and had the best possible return to work last Wednesday with a lavish Indian banquet at Mumbaiwala in Ponsonby. Though we have loads of good places to eat curry in Auckland, they’re clumped at the low-fuss, high-value end of the spectrum.

Nothing wrong with that, but there’s a gap for somewhere a little bit nice to eat, without doing the full-noise Sidart experience (highly recommended on a special occasion) or traipsing into town to the wonderful Cassia. Mumbaiwala has instantly filled this niche and I’m delighted to have my megaphone back to shout about it.

Housed in a stand-alone building at the north end of Ponsonby Rd, Mumbaiwala is decorated thoughtfully and thoroughly — a stylish montage of Indian newspaper clippings on one wall, a descriptive quote about the titular city on another, and dozens of cylindrical lampshades hanging from the ceiling and creating a cosy space.

The toilets are cosy too, with well-appointed unisex cubicles and railway sound effects on a loop. It works, sort of, and I was about to tell you it gets extra points for being the only New Zealand toilet with choo-choo noises but then I remembered Dunedin brewer and train geek Richard Emerson who, when he finally got to build a pub with his name on it, installed a locomotive-whistle motion sensor in the men’s bathroom before they’d even plumbed in the urinal. There’s nothing more depressing than an expensive fit-out where the food doesn’t measure up, but the tucker at Mumbaiwala is simply wonderful. The menu is long and everything looks unmissable, so I did my best to order a representative sample — an old-school curry, something from the tandoor oven and a selection of the street food-style snacks.

The dahi puri are an exciting arrival — five perfect spherical shells on a little silver tray, drizzled in spicy yoghurt and tamarind sauce and filled with an incredible, silky mixture that the menu told me was mashed potato and chickpea but which I found impossible to verify, the whole thing shattering into a beautifully delicious mess as soon as I bit into it. It’s a must-order, though first make sure you’re comfortable with your dinner guest seeing you covered in explosive yoghurty detritus.

The vada pav was the simplest thing on the menu but I loved it most of all: a spicy potato patty smeared in sour-tangy sauce, wedged between two soft, toasty buns. It was everything that’s good about street food — fast, filling and incredibly tasty. 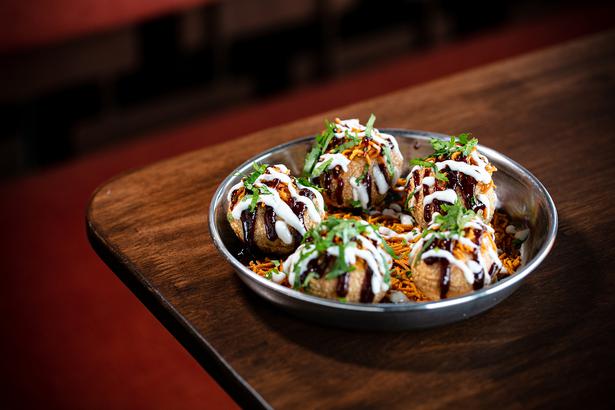 Most of the spice so far had been that residual heat you get after a good mouthful but I ordered the lamb curry “hot” and it was next level, a gravy so packed with chilli it actually hurt your tongue to touch it.

No complaints — this is the sort of dish you daydream about in the late afternoon — but it was a heck of a fight finishing the thing. When something burns that hot in your mouth your instinct is to get rid of it by swallowing but, of course, that only makes it spicy in new places. Sweat came out of some new places too and again I made a note that Mumbaiwala might not be ideal for a first date.

There is a long and thoughtful drinks list that is worth exploring. Beer goes well with spicy food but can add to the overall feeling of bloated exhaustion by the end of the meal.

I’d instead (or as well) go with a cocktail — my kachumber cooler was delicious, an unexpected gin and ginger beer combo with light East Asian spicing, sadly served over a bunch of small ice cubes that fell upon my face every time I tilted the glass for a drink.

The service is remarkably good. I know of at least one other big Indian restaurant that has really struggled with the number of their staff in isolation but there is no sense they’re battling here — the food arrives fast and fresh, delivered by elegant waiters in good humour.

This is a brilliant addition to Ponsonby Rd and a great choice next time you’re craving spice.

Every dish costs $8 at this busy, buzzy Asian tapas spot, from salmon steamed in banana leaves to crispy mushroom fries