The hottest restaurant on the planet wastes no time making you feel like one of the luckiest diners in the universe. Champagne is poured the second you're seated and the first few minutes are a blur of colour and discovery (pigs shiny with coconut fat! Icecream that sets the tongue on fire!) as a sea of people introduce you to dishes you are sure to be talking about well after the restaurant goes dark here, as planned, after a mere seven weeks.

Here is on the sand of the Yucatan Peninsula, under a canopy of palm trees, where one of the world's most renowned chefs has opened his latest pop-up, Noma Mexico.

"Setting up a restaurant in the jungle is one of our more challenging tasks," says restaurant manager James Spreadbury, whose colleagues sport shorts behind their aprons.

James is one of 145 employees, family members and guests of Noma in Copenhagen, hailed for four years as the "Best Restaurant in the World" and on hiatus since the end of last year, when the restaurant at the fore of the new Nordic trend closed for the second time in its history. The first was in 2015, when the team flew to Tokyo for a five-week pop-up. Success in Japan led the next year to Noma Sydney, which is where planning began for a seven-week run (April 12 through May 28) here in Mexico.

Such is the reputation of Noma and its chef, Rene Redzepi, that tickets for all the US$600-per-person ($870) dinners sold out in two hours.

Back to the blur.

"Pinuela and tamarind," says a server, setting down cactus fruit that remains crisp despite boiling and gets its pow! from tamarind paste, mezcal drops and cilantro flowers. "It's not bitter or poisonous. It just feels like a lot of seeds." The dish is quickly followed by a ceviche featuring a queen clam from the Sea of Cortez, its maritime freshness flattered by powdered local lime leaves, and salbutes, sheer, deep-fried tortilla cups filled with dried tomato concasse and eaten with our hands. The fine crunch comes not just from the shell, but also from crickets from Oaxaca and grasshoppers roasted in garlic. Two young men ferrying a suckling pig, a mahogany prize splayed on palm fronds, sidle up to the table to let us preview a future course.

Eager to see more of the unfolding spectacle, my dining companion shifts his seat, which sends staff scurrying over to check in on him and reposition our table on the sand floor —- and underscores the daunting nature of, well, nature.

Noma Mexico almost didn't happen — repeatedly. Previous destinations had the immediate advantages of big sponsors (a tourism board in Sydney, the Mandarin-Oriental hotel in Tokyo) and ready infrastructure: airports, good schools and lodging for staff and family. Some members of the travelling food show also worried about political turmoil in the country following the US presidential election.

American Express and Colibri Boutique Hotels stepped in. Belatedly, the Mexican state of Quintana Roo also offered support. Redzepi, who says he has travelled to the country at least 25 times and briefly contemplated Ensenada and Oaxaca as backdrops, knew the potential of a pop-up in Mexico. To start, there was the country's amazing larder. "It's like looking at the stars and you say, 'pick one' as your favorite ingredient," says the chef.

To hear Rene, 39, tell it, no one eats with the exuberance of his host country. "You dive into it" in Mexico, he says. "You eat with your hands." In stark contrast to the dour meals he recalls from his youth in Denmark, "People are always reaching for things," he says, pretending to snatch food off a platter. 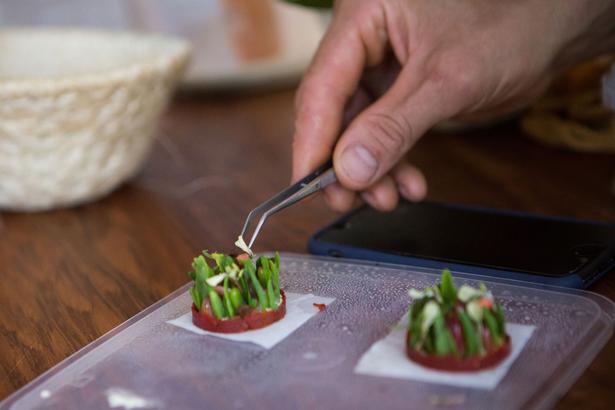 A cook prepares salbute, which includes grasshoppers and crickets. Picture / Jennifer Chase for The Washington Post

Rene, who spent five months researching the region, is also enchanted by what he calls "spice", in particular capsicum, or chile peppers, native to the Americas. Having coached the world on fermentation and foraging, he and his kitchen crew now refer to heat as "the sixth flavour," after sweet, salty, sour, bitter and umami (a Japanese-coined word used to describe a pronounced meaty taste). Diners first encounter heat in a visually arresting bowl of cool masa broth with floating "flowers of the moment". It takes a few seconds, but droplets of habanero oil on the surface of the broth make themselves felt, loud and clear. (Can we talk? The bouquet appeals more to the eyes than the tongue.) The last course, chocolate sorbet served in pasilla peppers that have been simmered in sweet-sour melipona honey, goes out with a bang, too. "Diners were very skeptical," says Rene. "But it's one of the best desserts we've ever done." The intense chocolate and the chilli heat are dynamite; envision a Fudgsicle crossed with a firecracker.

If Gilligan's Island had a fine-dining restaurant, Noma Mexico would be it. The adventure starts across from the oceanfront La Zebra hotel, where smiling greeters check your name off a guest list and lead you to your table via a sand trail that passes bushels and baskets of some of the many ingredients (jackfruit, mangoes, Yucatan limes) on the tasting menu. In the near distance is a long kitchen, inside of which all the cooks acknowledge each arrival with a thunderous "Yes!" (The best table may be No 23, parked front and centre amid the greenery and with a view of the kitchen that captures the four local women whose sole job is making tortillas.) Initially, you're too dazzled by the parade of tropical dishes to notice the thought that has been lavished on the design. Soon enough, you find your fingers rubbing the smooth surface of the tables made from salam, a local hardwood, and now known as the Noma style of furniture. Everything including the water pitchers and dagger-like knives was custom-made in Mexico.

More than a waylaid delivery, the staff's biggest fear is bad weather; Rene has budgeted for a single rain day. So far, so fair, but in the event of a downpour the team plans to block rain with tarp ceilings and install click-on tables on the perimeters of the kitchen. In the end, though, this is a tropical jungle. When a leaf falls onto your table, it's not a bother, but another pinch-me moment.

If there's a more stunning fruit soup on earth than Noma Mexico's bowl brightened with star fruit, grapefruit, avocado, mango (and more), I have yet to dip into it. Part of Rene's talent is creating brilliance from humble ingredients: a halved coconut pressed into service as an edible display case for shimmering caviar and coconut cream; finger-length apple bananas, sliced and served with what looks like ink but is in fact charred banana skins crushed with orange juice — a surprisingly luscious portrait in ebony and ivory, finished with seaweed oil. This is food that makes you laugh and think and brace yourself for the next course. 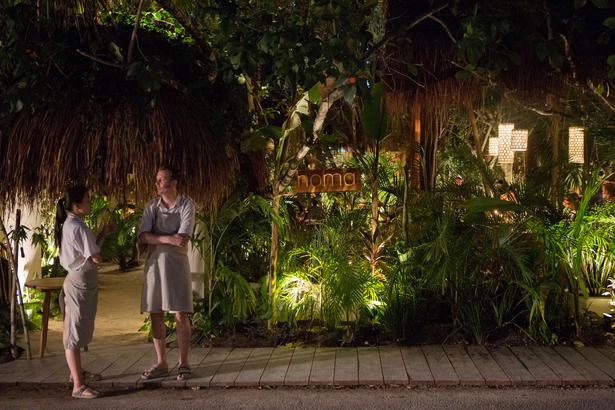 "We have a lot of Mexicans working with us," says Rene. "A lot to live up to."

Why aren't more chefs cooking with ants? Rene famously featured the insects in his restaurant in Copenhagen (spread on beef tartare) and Tokyo (dappled on live shrimp) and puts them to delicious use here in Tulum, where they are mashed and spread on an avocado half, lending a pleasant citric bite to the dessert. (The flavour comes from formic acid in the insects.) Ants, says Rene, can vary in flavour from blue cheese to cilantro to lemon.

By the end of the night, I feel as though I've met everyone who works at Noma, including the most famous dishwasher in the world, Ali Sonko, a 62-year-old Gambian native who helped open Noma in 2003 and was recently made a partner in the enterprise.

The extreme hospitality at Noma Mexico — confident, knowing, comforting — feels genuine. No doubt, it springs from the closeness of the team. The notion of family takes on new meaning when you consider the staff, made up of more than 20 nationalities, pretty much lives together for the life span of the pop-up, with only Mondays and Tuesdays off. Speaking of family, Rene keeps his biological tribe close. Along for the ride on this pop-up are his wife, three young daughters, twin brother (who performs maintenance) and mother-in-law, whose background in psychology makes her Noma's "wellbeing officer".

Rene has heard the criticism: US$600 is a lot to pay for a meal, especially a dinner that isn't easy to reach. "There's a Protestant reaction to spending money on food" that doesn't extend to indulgences including apartments, cars or clothes, he says, almost with a sigh.

But the chef says he believes in living wages for his staff and has partnered with a nonprofit collection of Mayan communities, Traspatio Maya, to provide crops including cilantro, corn and wild bee larvae. Local weavers made the adorable sisal turtles attached to the menus, brought out only at the end of dinner. "My conscience is clean," says Rene, who has also created a scholarship fund for Mexican culinary students. 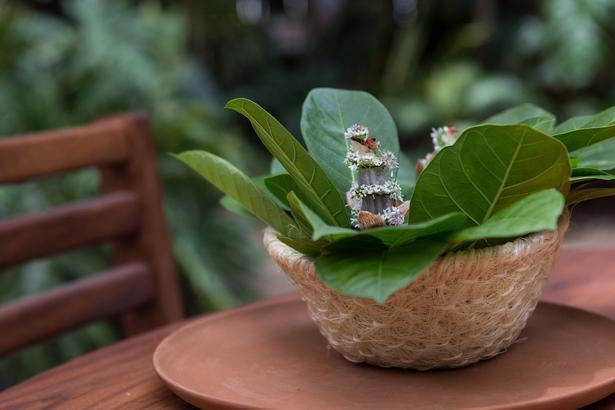 Pinuela in tamarind is a cactus fruit flavored with tamarind, mezcal drops and cilantro flowers. Picture / Jennifer Chase for The Washington Post

Indeed, to hear about the logistics of the restaurant, built from scratch and expected to be turned over to the co-sponsoring Colibri Boutique Hotels when the road show ends next month, is to wonder why the tasting menu doesn't cost even more. On Wednesday, Noma Mexico is expected to become a wee bit more accessible when it opens its jungle bar to walk-in customers and starts serving a menu including ceviche, tacos and cocktails. Let the lines begin.

This is expected to be the last pop-up before Noma 2.0 opens in Copenhagen in December with an experimental urban farm. While several new names have been considered, including Deep Blue and the Abyss — the latter rejected for what Rene calls its "last-meal implications" —  the most celebrated chef in the world says he's likely to stick with Noma.

Wherever in the world he's cooking, Rene reminds his staff to reward diners for the effort they've put into the visit. It's a tall order: "We have to be the meal of the decade for people."