"They’ve fitted it out so well that it really does feel like you’re in a flash Auckland restaurant." Photo / Babiche Martens I’ll admit it happens less often these days but I really enjoy it when restaurant staff don’t realise I’m here to write an 800-word assessment of their performance in the national newspaper.

De Nada was full when we arrived (good for them!) so they pointed us to a windy table outside where we sat for some time hoping to be offered a drink, but they’d forgotten about us.

Eventually a staff member came out — she must have had that gnawing feeling I get when I drive away on holiday and accidentally leave one of the kids at home — and after some negotiation agreed to lead us back inside to the empty table we could see through the window. She took our orders and brought me a Michelada, which I drank quickly.

“You drank that quickly,” she said.

But they’re not rude, they’re just unaffected. Though De Nada is situated in Boomer Central, the restaurant has a much younger vibe than you’d expect — staff in their early 20s serving food to large tables of other Gen Zs.

One of the only older people in the room was Children’s Commissioner Andrew Becroft, but given the age of everyone else, it was possible he was there in an official capacity. It’s been ages since I saw a dozen people get up and pay individually — “one margarita please, plus a third of a bowl of nachos and one-twelfth of the guacamole dip” — but the staff were unfazed. And of course you can’t blame young people for counting every cent when cocktails cost $19 a pop.

I don’t know much about the owner of this place but the waitress told me he is 24 and also owns a nightclub, so perhaps removing home-ownership as a realistic goal has had an unexpected impact on Zoomer entrepreneurship.

“He’s standing outside,” she pointed, but I went out to meet him and there was nobody there. Why did she so badly want me out of her restaurant?

Somebody asked me to recommend a good Mexican the other day and I really struggled, so I’m pleased that next time I’ll be able to send them to this place, where the food is really, really strong.

I’m not sure it’s the most authentic — most of us know by now that hard shell tacos, for example, are an American invention rather than a traditional Mexican one — but it’ll take you back to the sort of food you probably grew up with in New Zealand, albeit with some modern updates.

No Auckland restaurant can make the numbers work without a raw fish dish, and here it is tuna, just little bits of it, dotted around a plate of otherwise pretty standard nachos — they even leave in the cheddar cheese. For some reason, it works, and that’s partly because of the quality of the corn chips, which I presume are house-made. They are very light and neutral in flavour — just an extremely crunchy little vehicle for the fresh ingredients. 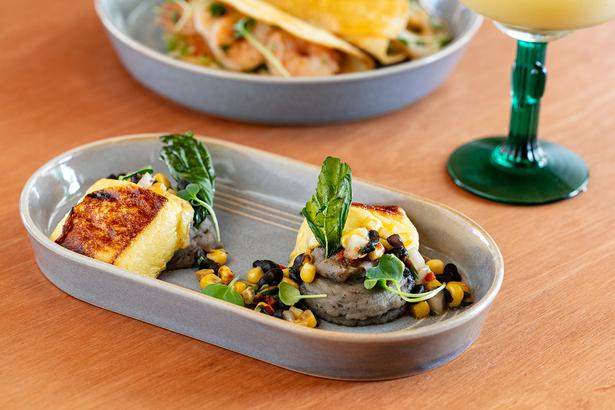 There is other light food if you want it — a vegan salad, for example, or a “prawn cocktail taco” that is barely seasoned or sauced — but the most delicious stuff is fried. I loved a big chimichanga (a dish that originated in Tucson, about an hour north of the border) — a burrito filled with chicken and deep-fried to a golden crunch, served with a smoky yoghurt and some pink pickled onion.

I’m pretty sure the pork rib tacos were deep-fried too, and they were all the better for it. But if that sounds like too much for you the quesadilla is a much more approachable dish: a bean-tortilla sandwich, browned in a pan and served with sour cream and a surprisingly spicy salsa.

Actually, everything is pretty spicy here — from the condiments to the cocktails, rimmed with chilli flakes. I’m a spice fiend and had no occasion to open up the two complimentary bottles of chilli sauce on our table.

What a winner this place is. I don’t know if this is the vibe they’re going for but it’d be great for families — crowd-pleasing food and strong drinks for Mum and Dad.

They’ve fitted it out so well that it really does feel like you’re in a flash Auckland restaurant, not, as is more common in this area, a seventh refresh of a tired gastropub.

If you’re a fan of this sort of food (and really, who isn’t?) drop in with some friends to De Nada, but be sure to book.

With its chef Lucas Lee guided by Cocoro’s Makoto Tokuyama, the new Japanese restaurant in Remuera offers a fresh twist on grea...