The minimalist and wholesome interior of Homeland. Photo / Babiche Martens High-performing and socially conscious, it is set up to create success not just for the owner but for the producers and communities it supports.

"Sustainable" is the most over-used and misused business word of 2021 but what it looks like in practice is simple: the better the business does, the better the world does.

And so it was reassuring that, when we turned up for lunch unannounced, we could barely get a table.

In fact we were on the verge of eating at the Hollywood Bakery instead, when the floor manager returned one last time to the booking sheet, did some arithmetic and a little geometry, and managed to find us two seats.

It's an all-day eatery where breakfast quickly bleeds into lunch so, when we left at 2pm, they'd already served 160 people and nobody on the floor had yet taken a break.

This pitiless toiling was impacting a little on wait times, which stretched out as the meal progressed. The menu is based on a garden-to-table style. Photo / Babiche Martens

Luckily there is so much goodwill in the room that it's difficult to get cross.

At one point celebrated chef Michael Meredith arrived with his daughter — his first meal out since the birth of his latest child.

It said a lot that he would choose to eat here, to pay respect to the OG, PG.

Later on Instagram I saw Al Brown post about getting "the greatest cheese scone in the world" from Homeland.

The industry seems rapt that Peter is back in Aotearoa; perhaps he should have called the place "Homecoming".

Interestingly, I'm not sure I could have picked it as Peter Gordon's food just from eating it.

I have been a huge fan of his since the end of last century, own many of his cookbooks, made the pilgrimage to Providores during my OE and have really enjoyed Sugar Club on the half-dozen times I've eaten there.

But though the food offering is strong at Homeland, it wasn't quite as distinctive as you might expect: baked carrots with hummus, watermelon feta salad, skillet-fried paneer with tomatoes and herbs ... has Peter stopped doing fusion, or has his style of cooking been so influential that it just seems normal now?

The latter seems more likely but I'm not convinced.

The dishes at Homeland are delicious but they are simple. I had a lovely piece of monkfish for my main course — a fish that often arrives hot and soaking wet due to its density but was just the right amount of moist here, baked with extreme mastery in the oven and served with bok choy, broccolini and mushrooms.

None of these ingredients tasted of much but themselves, though I came to think of this as a feature at Homeland rather than a flaw.

Unless I ordered badly I think it's fair to say that you won't come here for huge flavour bombs, rather for a celebration of produce and careful cookery.

There was a lack of starch to the food, though that might change in winter when Homeland's supplier at Papatuanuku Marae starts turning up with different sorts of surplus vege.

As it was, we left feeling light despite having eaten plenty; Auckland has a lot of new comfort food restaurants, so eating brightly cooked vegetables by the sea is a decent niche.

The heaviest thing I ate was probably the mussels, which came with a pile of quinoa modest enough that you couldn't see it until you dipped your spoon into the spicy coconut broth at the bottom of the bowl.

They usually serve clams rather than mussels in that dish but had sold out on the day we visited (though I'm not sure they changed the price — $35 for a bowl of greenshells seemed steep).

There's something very reassuring about a restaurant that cooks what's in the fridge that day and Homeland takes this to the extreme: sometimes, the manager reported to me with a nervous laugh, "the kitchen is still printing menus when we open the doors in the morning". 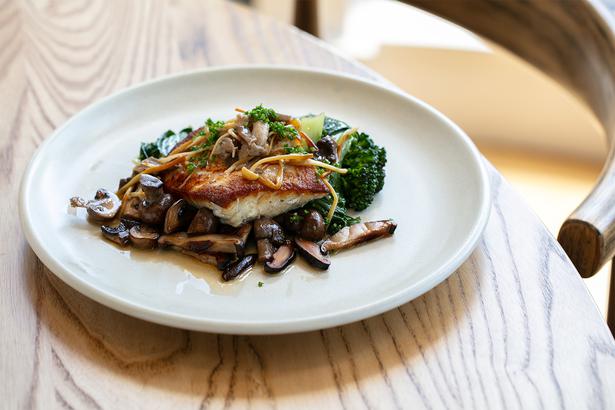 It's hard to imagine eating here and not enjoying yourself.

It's a big, light room with views of the ocean — in the old "Mantells by the Water", if that rings a bell for you.

Half of the building is devoted to dining and half to teaching — the idea is Homeland staff will learn from diverse local communities as much as the other way around.

They've styled it "The Food Embassy for Aotearoa and The Pacific", which tells you something about Peter and his partner Alastair Carruthers' ambitions for the place.

He's a chef who's never forgotten his roots, who has returned regularly to his home country and worn his silver fern on his sleeve in all his overseas endeavours.

Now with the manukura back in New Zealand, apparently for keeps, instead of retiring to Omaha he's putting his hand up to lead the industry into a post-Covid, future-friendly recovery.

Telling you to support him makes it sound like a chore; eating here is the easiest good thing you can do for the world.