Restaurant Review: Britomart's Kingi Has Found The Boldness Of Its Vision

We had a year of freedom between Big Lockdown One and Big Lockdown Two and really we took it for granted, celebrating drive-through fried food for a day or so before settling back into our respective pre-Covid ruts and acting as though it had all been a fever dream.

But I think we’re more grateful and more realistic this time around. Omicron is widely viewed as a when-not-if, and without any particular reason to think the variant will affect us less than it has other highly vaxxed, masked-up countries, we’re likely to have mere days and at best weeks to enjoy our current freedoms.

So even though Delta isn’t quite eliminated in Auckland you could argue it’ll never get any safer than right now to go out and enjoy beautiful food, cooked and delivered by beautiful people.

I arrived at kingi full of hope. Despite a torrid pre-opening, discussed in my previous review, the new restaurant from the owners of Daily Bread arrived in 2020 with an immaculate pedigree and appealing concept, situated in a gilt-edged city development and with nothing to suggest it wouldn’t be another perfect venture from the boys who learned to turn yeast into gold. But my initial visits were disappointing — average food, below average service and above average prices. 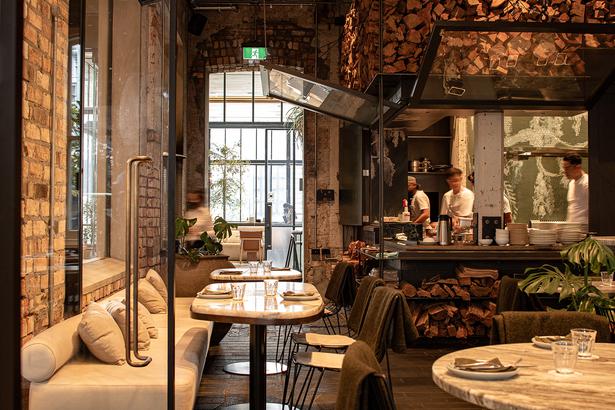 Twelve months later, something has changed. You can feel it as soon as you walk in, or rather, walk near — we got from our carpark to our outdoor table without stepping into shadow, on one of those hot January days we seemed to have so many of before the weather finally broke.

Despite the scorching temperatures kingi had put blankets on every seat, and I was about to gleefully mock this policy when my wife picked one up, wrapped it around her shoulders and snuggled deep into it with a look on her face that said, “Why don’t more restaurants give you the option of a woollen fleece on a 28-degree summer afternoon?” Not for the first time, a stranger in charge of a restaurant knew more about my wife’s physical and emotional needs than I did.

“This is good so far, right?” said a voice from inside of the blanket and I had to agree with it. The waitress arrived and charmingly picked out some of her favourites from the menu. The airy dining environment was exactly what was needed on a first, nervous excursion from home and the food looked good.

Blanket suggested we order some kina on toast while deciding on our mains and it was the right call, taking some hunger pressure off the big choices with a snack you wouldn’t get in any other city in the world, nor any other restaurant in the city.

Kina is, as they say, a lot, but as with sea urchin on sushi rice the bread helps soak up some of the flavour while a sliver of pancetta balances the seafood like a lick of salt with a shot of tequila.

The service was great. Yes, there were a few long pauses but Auckland is as short of waiters as it is of houses right now so I encourage you to show generosity of spirit when it comes to delays and understaffing.

One Britomart restaurant has advertised a $500 “poach a peer” incentive to staff of rival businesses, which tells you how desperate/mercenary things are getting. The best you and I can do is order an extra drink and, for now, take service as it comes. 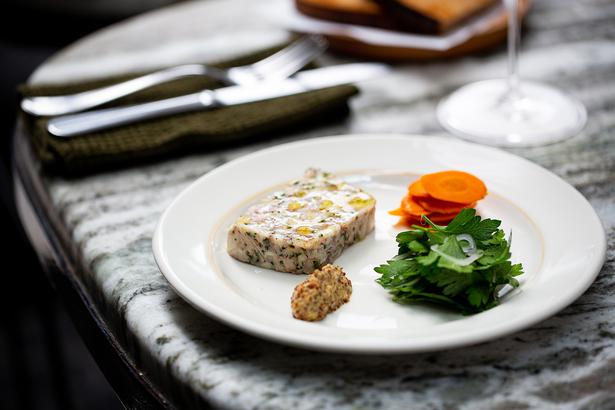 The snapper terrine with parsley and pickles. Photo / Babiche Martens

Everything we were served tasted good, both in measurable ways (a light, puffy flatbread hot from the oven trumped last year’s deflated attempt at the same thing) and in less definable terms — it just felt like there was more love on the plate.

These guys worship every inch of the fish and the menu reflects that — they use fatty snapper head meat in a terrine, hapuka roe in a taramasalata and wings of the blue cod fried and served up with a ranch dressing, which I bet has improved since last year too.

But if that all sounds a bit fruity you’ll love the snapper fillets (these are literally fruity, with Granny Smith matchsticks providing crunch and acidity) and the meaty oyster mushrooms, which are singed crunchy in places by the wood fire and dressed for delivery in sweet white vinegar (the waitress told us to order these and we didn’t, so she gifted them to us between courses).

The “new” kingi is great already but it’s about to get brilliant. They’ve hired chef Uelese Mua, who was doing great things at Euro when it announced its permanent closure mid-lockdown.

He’s a young dad, a brilliant chef, and a rising star … having got over its opening jitters, kingi has a new leader in the kitchen who will take it somewhere even better.