“Are you going to post a photo of yourself standing on the front steps like a Basic?” asked my colleague.

“I’m not planning to,” I replied, after a 30-second pause during which I turned to my computer and looked up what a “Basic” was.

Later that night as we ascended those steps I said to my wife “shall we take a selfie like a couple of Basics?” and she asked what a Basic was but I’d already forgotten so we huddled around my phone and looked it up again together. 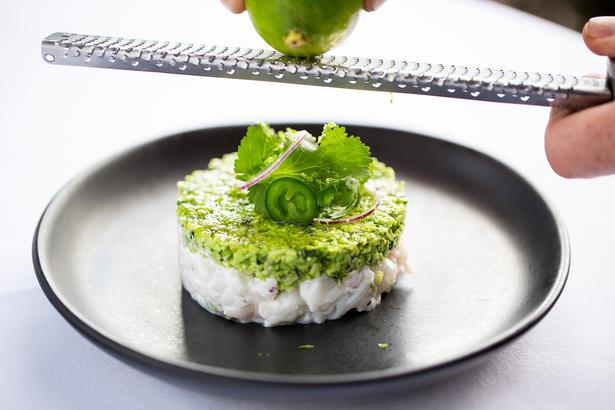 Having solved the mystery for a second time we took a seat inside and Victoria ordered a glass of Champagne, which came with a note inside a small velvet bag, telling her that she’d won a pair of earrings.

It turns out we’d stumbled into one of the most successful Auckland restaurant promotions of all time, and I’d like to tell you how much the earrings were worth but Victoria told me googling the price would be a very Basic thing to do.

The waiter told us that one out of every five Champagne orders won a prize so, not wanting to miss out, I ordered one for myself and, against all the odds, I was a winner too!

“What did you win?” Victoria asked.

“Apparently I’m eligible for the second chance draw!” I reported with delight, and we clinked glasses, happy to have something to celebrate.

It was a Monday so I wasn’t expecting to glimpse much of Soul’s legendary party scene but I have to say the place was packed. Loads of corporates, a long table of rock-star types and a smattering of the sort of people you might see in those Instagram photos — we were almost the only couple in the room. I’d expected service to be of the formal, super-efficient style but it had more personality than that — you’d almost describe it as charmingly bumbling. The waitress topped up my water glass and left a small pool of water on the front of my menu.

“Oops,” she said as she crashed some crockery together, “sorry about that!”

“That’s fine,” I said, deciding not to tell her that she was standing on my foot.

But, God bless them, they were getting the mahi done. We barely waited for anything, they knew the menu very well and seemed to have a good system in place, with a more-senior floor manager hovering nearby to spot trouble and occasionally issue instructions.

And the food is brilliant. My biggest complaint is that the menu is quite hard to get your head around — no natural order to things, just several different lists of dishes loosely arranged by genre. It’s the downside of having something for everyone — your menu loses its shape and you can feel like you’re at a hotel.

The jalapeno scampi cocktail is a wonderful dish, that delicate seafood a real front-foot ingredient rather than, say, being hidden inside gloops of Marie Rose.

The green chilli mixed with lime and coconut yoghurt gives the food a subtle Spanish flavour while a carpet of finely chopped edamame beans on top of the disc-shaped construction provide beautiful colour and texture.

My chicken pate was like no version of that dish you’ve ever seen: a soft pink puree expertly moulded across half a white plate, it’s served with a sweet date and vinegar syrup and bread, and tastes delicious.

A slow-cooked beef pappardelle is wonderfully indulgent no matter where you eat it but at Soul, instead of grana padano, it comes with a thick slice of raclette cheese, melted over the pasta with a gas torch. The hapuku is a beautiful dish too — a rare chance to enjoy seasonal walnuts with fish, it’s served on a sauce I think was mostly dry white wine and cream but added just the right amount of richness to the meaty groper.

Recently, at Cotto, I ate the best Brussels sprouts dish in Auckland and it reminded me that you need to treat ’em mean. At Soul and at another restaurant recently they’ve come half cooked, which isn’t terrible but seems to me a bit of a waste of one of autumn’s great delicacies. That was my only criticism in a night of fantastic food.

It’s a great credit to Soul that despite being in fashion and tourist-friendly it actually has one of Auckland’s great kitchens. You can show up with zero interest in people-watching or being seen and still have a wonderful time. If that other stuff is for you, then so much the better.