I will be honest and admit that midway through an Omicron surge is not the ideal time to be visiting restaurants.

We know they need us, we know that if we don’t support them in the bad times they won’t be there in the good times and yet, depending on our personal appetite for sickness and risk, it does seem like a pretty useful time to be staying home and ladle-ing our way through the 5kg sack of arborio rice we panic-purchased at the onset of Lockdown ’20.

I do see a solution though. I think we need to assemble an Army of the Recently Infected. Something like 300,000 New Zealanders have received about 12+ weeks immunity from Covid in late summer, and I think they need to be splashing the cash right now, fearlessly kissing the maitre d’ on both cheeks upon arrival, ordering the fingeriest of finger foods to share with their antibody-soaked friends and family, playfully squeezing the shoulders of other diners on their way from table to bathroom and generally partying like it’s 2019.

For the rest of us, there is outdoor dining. I do hope Auckland Council is turning a blind eye to the restaurants milking the most out of their footpaths, giving nervous diners the opportunity to arrive, wave to somebody inside who looks like they work there, then sit down in the direct path of rental scooterers, ready to order a drink. "Williams is one of many sparkling reasons to wander through Wynyard Quarter." Photo / Babiche Martens

That’s what I’ve done a few times at Williams Eatery recently, and it’s become one of my favourite places in Auckland to visit.

Found on a street corner that didn’t even exist until a few years ago, Williams is one of many sparkling reasons to wander through Wynyard Quarter and inhale the fragrance of modern commercial development.

This whole area has a great progressive vibe despite having recently retired its tourist tram to Motat (surely setting some sort of tram world record to go from ribbon-cutting to transport museum within 10 years) and is now one of the finest spots in the city for a kombucha in the sun.

Williams did a great lunch takeaway service during retail closure last year, and it was then I discovered their Middle Eastern-style platter plates, which added something really new and fresh to this familiar genre.

Bright pickles, bold flavours, moist falafel, and resisting the temptation to build the entire plate around hummus were some of the main attractions, and I later found out that the chef had some pretty impressive lineage in this space, having descended from the family behind Phoenician Cuisine, a famous Lebanese oasis next to the Embassy Theatre on Kent Terrace.

So I was about to write you all about it when the chef Elie Assaf up and left, parting on apparently good terms but presumably with ambitions for something greater than breakfasts, brunches and lunches.

At that point sous chef Arjay Soneja stepped up to the plate and, I’m pleased to tell you, he looks to be hitting it out of the park — keeping the best of the old menu while cautiously introducing some pan-Asian elements including some big dishes from his own Filipino heritage. 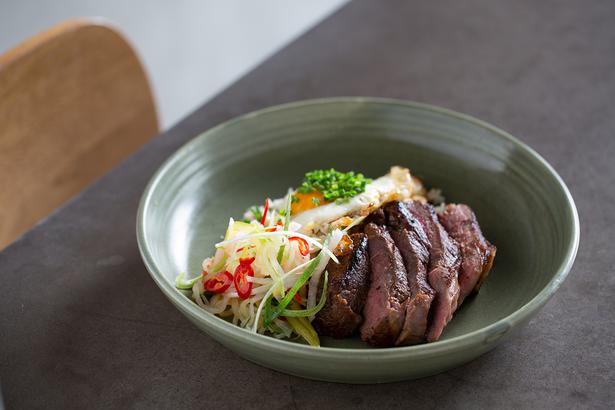 I mean, who doesn’t love French fries with aioli anyway? But here they come with a vegan XO sauce of Arjay’s design — a funky, spicy little number that makes those skinny, skin-on, salty fries even less possible to stop eating.

Beef for brunch is a lot, but if you’re up for the Manila classic you’ll enjoy the tapsilog, a tum-stuffing combo of marinated steak, rice and fried egg, with a side of pickled papaya.

The very garlicky rice is as moreish as the chips, and is another staple of the Philippines Arjay is excited to bring to the Auckland masses (you wouldn’t want to be mouth-kissing a stranger any time soon afterwards but presumably it’s been some careful months since you did that anyway). There’s a little fragrant lemongrass in there too, for the connoisseurs, but the rice works as well in a mezze as it does with that sirloin.

I’ll go back to try his longganisa garlic-chilli sausage but if you really aren’t up for meat you should be reassured that the lighter Lebanese dishes are going to stay.

There’s not much in Auckland that’s as good for brunch as those steamy falafels, covered in minty sauce, with an (not, in my opinion) optional side of flatbread, fresh, puffy-baked and slick with za’atar and olive oil.

Williams isn’t open for dinner outside of private functions, but it’s a delicious destination for the middle of the day with a very short, strong wine list and excellent coffee.

You get no sense of the industry staff shortages here, where it feels like one big happy family, and having worked everywhere from fish and chips to fine dining since moving to New Zealand 12 years ago, the chef radiates an excited energy through his food, seemingly all set to make Williams his happy home for a long while yet.