Prosciutto and butternut pizza, cauliflower and the bitter leaf salad from the menu at Saint Alice. Photo / Alex Burton Restaurant Review: At Saint Alice, The Pizza Is Dependable

It can be tricky finding a good dinner on Monday night in Auckland and, having eaten pretty thoroughly at Commercial Bay recently (I’ll be back for Ben Bayly’s incredible-looking French bistro, Origine, opening in early August), I found myself searching for a table at the Viaduct (on the Viaduct? In the Viaduct? I’m not clear enough on what the word actually means to choose my preposition with certainty).

And your Monday problems aren’t over once you’ve found an open restaurant. Supplies are often much depleted following the weekend rush and deliveries of food; seafood, in particular, can be hard for chefs to come by. You’re very likely to be told that there isn’t any fish left in the fridge or, worse, that there is.

Both sashimi and oysters were off the menu at Saint Alice but there was plenty else to choose from, with the help of a spirited server with an unfamiliar accent. She indulged us in a good game of “guess where the waitress is from” (a middle-aged version of Globle) and the party atmosphere was dulled only when she asked about our own heritage and we both mumbled “New Zealand”, wishing hard that our answers were a little more exciting.

The food, which I’ll get to, was pretty good. But I need to warn you about the temperature. You may be unsurprised to hear that a second-floor restaurant, next to the ocean, in the middle of winter, with plastic walls, is not the warmest place to spend a couple of hours. “How cold are you out of 10?” Stephen asked at one point. “I’d say I’m an eight.” And that was after we’d moved as close as possible to the ceiling heaters, which seemed to have the approximate thermal intensity of a flashlight in a tent.

Still, cold bones and the lingering embarrassment of not having been born somewhere more exciting were not enough to put a damper on our good moods, and once the food started arriving we cheered up quickly.

Chef Maia Atvars (ex-Depot) is still in charge having been there since the place opened three years ago and his cuisine is just as solid, although on the night a couple of the executions were shaky enough that I correctly guessed he was at home, with the B team in charge.

A wood-roasted cauliflower looked and tasted more like it had been steamed — difficult but not impossible to avoid when you’re cooking the whole head at once. The pasta was overcooked and barely salted — something that I suspect would never happen if the skipper was at the tiller.

Still, he’d had an influence that after-noon, and we enjoyed dipping bits and pieces in handmade yoghurt and labneh, a nice touch at a restaurant that is mostly a bar and where you might expect the condiments to be pre-packaged given the short-order nature of the menu. The labneh came with a nice half of chermoula-rubbed roast chicken, which was tasty enough to keep the masses happy.

But my simple favourite might have been the poutine chips — just some old-fashioned fries sitting in hot gravy with little cubes of fresh mozzarella adding a creamy, firm texture to each mouthful. It was impossible to stop eating — pure fat served in three delicious ways.

That was a good time for the bitter leaf salad to arrive, heavily but pleasantly dressed with orange and pomegranate, sprinkled with crumbled feta. That freshness was appreciated with everything else going on, though raw rocket on a prosciutto and butternut pizza worked well too. 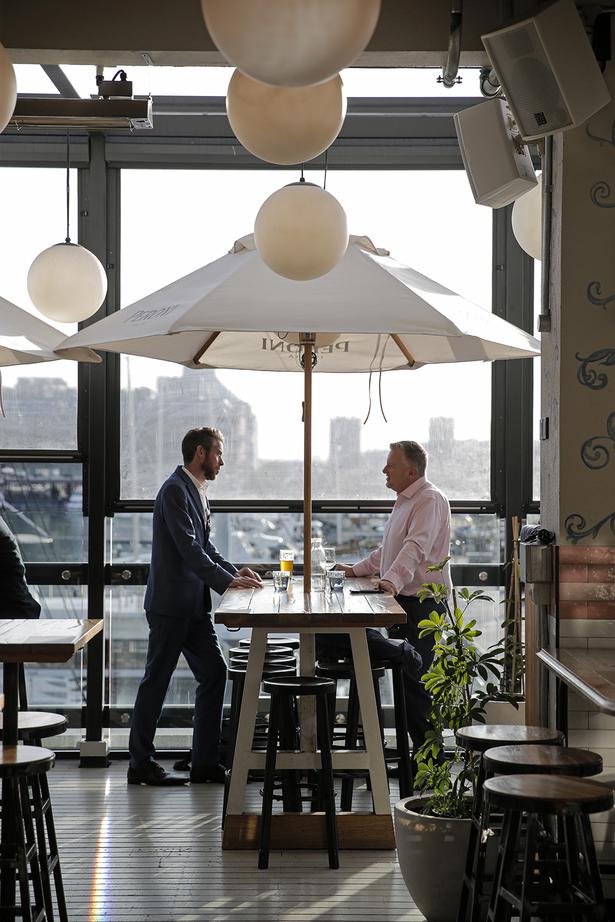 As a more adventurous eater, I missed some of the interesting menu items from Saint Alice’s original 2018 menu. The oyster macmuffin, the lamb sweetbreads… it seems like somebody woke up one day and said, “Forget this crazy stuff, let’s sell some pizzas.” So if pizza and a solid menu of other easy eats is what you’re in the mood for, this is a good option.

This week I also returned to Ponsonby’s Mumbaiwala — the Indian street food restaurant I reviewed a couple of weeks ago. With so many new places to try I don’t often go anywhere twice in the same month, but this was a work function and I couldn’t think of anywhere I’d prefer to take three young and hungry producers.

We had a perfect meal and I got to meet the owner, a brilliant 20-something woman who’s taken a major risk opening her first restaurant mid-Omicron.

“How has business been?” I asked confidently, looking forward to hearing about the impact of my review and hopefully impressing my younger colleagues.

“Last week was our quietest ever,” she said, then, perhaps noticing my crestfallen face, “I think maybe because of the rugby?”

So look, I’ve heard plenty of stories about a Viva review creating lines out the door, so don’t do just it for my self-esteem, but do visit Mumbaiwala when you can, for very spicy food served by very lovely people in a very pleasant environment.

Every dish costs $8 at this busy, buzzy Asian tapas spot, from salmon steamed in banana leaves to crispy mushroom fries