Salvador Dali’s foray into food and cookery was just as surreal as his paintings, as his recently republished book Les Diners de Gala illustrates Salvador Dali’s late-life foray into cookbook writing would not be to everyone’s tastes, even the artist himself acknowledged. Dieters and the health-conscious, especially, he warned away. “Close this book at once,” he orders in the introduction to Les Diners de Gala from 1973, when he was 68. “It is too lively, too aggressive and far too impertinent for you.”

Yes, Dali, the surrealist master, once compiled a cookbook and it was the culmination of a lifelong fascination with food. As a child, he determined he would be a chef and, even after he chose to pursue art as his career, the edible would be a recurring feature. On arrival in New York in 1934, he waved a 2m-long baguette at paparazzi. He loved the “logarithmic curve” of cauliflowers, and in December 1955, drove from Spain to Paris in a white Rolls-Royce Phantom II jammed with 500kg of the brassica.

It wasn’t just stunts: food was a leitmotif in Dali’s painting. In 1941, he created Soft Self-Portrait with Grilled Bacon, complete with curly moustache and a rasher of pig that reminded him of his breakfasts at the St Regis Hotel in New York. He painted his beloved wife and muse Gala with a couple of gnawed lamb chops on her shoulder in 1934. About this work, Dali later revealed: “My edible, intestinal and digestive representations at this period assumed and increasingly insistent character. I wanted to eat everything, and I planned the building of a large table made entirely of hard-boiled egg so that it could be eaten.”

There are no egg tables in Les Diners de Gala, republished now by Taschen, but there are many irresistible flights of fancy. Dalí’s dinner parties were legendary: he would bring in the greatest chefs of the age; guests were required to wear elaborate costumes. Wild animals — including Babou, Dali’s pet ocelot — roamed freely around the table.

More than 100 of the recipes from these occasions are printed in Les Diners de Gala. Most are the work of an unknown chef “whising [sic] to remain in the most secret anonymity”, but credit is given to Parisian stalwarts such as Lasserre, Maxim’s and La Tour d’Argent. Some are strange for sure (bush of crayfish in Viking herbs, for example, or frog pasties) but many are realisable by the ambitious home cook.

The lesson of Les Diners de Gala is that anything goes. Anything, that is, except spinach, “that detestable degrading vegetable”. “If I hate that,” Dali writes, “it is because it is shapeless, like Liberty.”
— The Observer 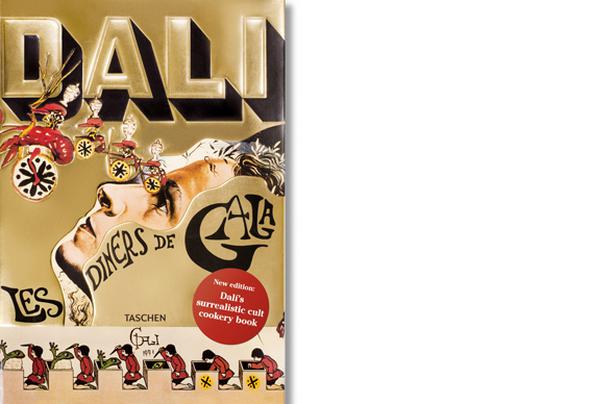