Decisions, decisions. Who knows which of his three restaurants Sid Sahrawat will visit as he makes his way from his North Shore home into the city?

“Sometimes I don’t know which one I’ll be at until I’m on the bridge,” says Sid. Wherever his attentions may take him, the consistency of the delivery of impeccable food and service is paramount. “That’s what changes me from being a chef to a restaurateur.” Today it’s his latest baby — Sid at The French Cafe — where he and wife Chand took ownership three months ago.

As the week ramps up, so too does the busy-ness. It’s not just the food and the service that needs constant attention and tweaking, there are the meetings to attend to: suppliers, tradespeople, artisan craftspeople (all plates and tableware are bespoke pottery).

The buck always stops at their feet: as sole-charge operators, they are responsible for dealing with all issues arising from the business — which sees Sid attending to emails and paperwork when he gets home some time between late night and early morning. They personally handle all feedback.

He used to have Thursday nights off, but now they own three spots, that luxury has gone. He didn’t take the day off for Chand’s birthday. She’s used to it. “The staff don’t take their birthday off, so nor do we”. (Nor did they take leave for their 10th wedding anniversary, which also falls in December.) Sid Sahrawat in the kitchen at Cassia. Photo / Doug Sherring

This month is the craziest time. On top of dinner, there’s both a private lunch and dinner function at The French Cafe every day. As always, Sid will dedicate a full shift at one restaurant alone at night. Splitting his shift between all three in one stretch is counter-productive, he believes.

Next time you’re settling in for a quiet early night at home, think of Sid. That’s when he’s in full-charge mode. He really can stand the heat of the kitchen. The best part of the day is the four to five hours of service, he maintains. “That’s what we’re there for.”

How do they maintain their enthusiasm and energy? The constantly calm Sid goes to the gym five mornings a week. “To deliver the right experience, you have to have a lot of energy,” he says, adding there’s never a moment when he’s not thinking about the restaurants.

And how do they de-stress? For Sid it means a drink at the end of the week with his staff. Chand — a former teacher — gets in the garden.

There is never any escape from food — which is just the way they like it. On a normal weekday morning Sid, 38, is up early to cook breakfast for the couple’s two children, Zoya and Roan.

Then he’ll drop Zoya at school and head to the gym before making his way to Cassia, his eponymous spot, or their first venture, Sidart in Ponsonby. Chand, meanwhile, will have taken Roan to kindergarten before making her way to Cassia to attend to the many of administrative demands that come with the ownership of three high-end restaurants. Yesterday, Sunday, was family day. That meant a rare lie-in for Sid, who on average works an 80-hour week. With the build-up to Christmas, that count is forever climbing, but the seventh day is nonetheless dedicated to family and their own food explorations.

Dining out for lunch is part of the Sunday ritual. Zoya (7) chose the restaurant, as she always does. It was a toss-up between yum cha at Grand Harbour and Azabu in Ponsonby, with yum cha winning out. Says Sid: “It’s very important for them [the children] to dine out with us, so they learn dining etiquette and try different cuisines.” Adds Chand: “It’s educational too.”

After an afternoon nap and a spot of outdoor activity, it’s time for Sid and Chand to cook dinner at home together. Then the kids will be off to bed; Sid will prepare their lunchboxes for the next day, and he and Chand will wind down with Netflix, a glass of wine and undoubtedly a conversation about what lies ahead for the week.

This will probably be the last time they will be together for any great time until next Sunday. Laughing, Chand says, “My mum says it’s the perfect marriage, because we don’t see each other. So when do we fight?”

At the restaurant there’s a dining ritual for staff too. Every opening day, from Tuesday to Saturday, they gather around the table at each address to share a meal together before service begins. Hospitality is collaborative, says Sid, and they would not be able to keep all three operations running so successfully without the backing of all who work in them. 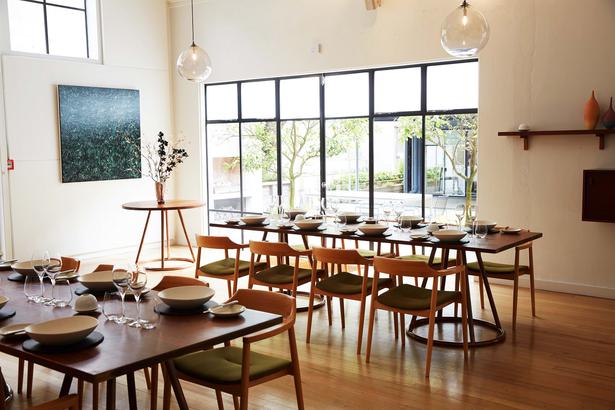 In the beginning there were just five at Sidart. Now there are 65 on the payroll. And despite the growth, the Sahrawats have not lost sight of who they are. “Our principle has been the restaurant is an extension of our home,” says Chand.

Come December 22 all three restaurants close for a month. Forget any thoughts of the couple putting their feet up. Far from it: they’re off on a busman’s holiday. The day after they lock the doors, all four Sahrawats are getting on a plane to India.

The itinerary has been dictated by food. A booking has been made at Indian Accent in Delhi, whose chef and owner Manish Mehrotra also has three restaurants (although they’re a little more geographically stretched, with another in London and the third in New York).

Christmas will be spent with Sid’s family in Chandigarh. Who will be doing the cooking? Sid smiles: We’ll just go with the flow.”

This is his approach to the business too. How big can they get? It’s like asking if somebody is going to have another child. The couple look at each other. Says Chand of their third purchase: “it’s not about owning more restaurants.” Chips in Sid: “it’s about getting a bigger family.”