The monkfish on the menu at Sid at The French Cafe. Photo / Babiche Martens Restaurant Review: Sid At The French Cafe Serves Sculpture With A Twist

On the night we visited, Sid Sahrawat was in the unique position of having only one kitchen to manage. Having sold his eponymous restaurant Sidart to a protege, he was recently forced to shut down Cassia for flood repairs. The latter is now back open but, for a time, all of its displaced kitchen staff moved up the hill to Sid at The French Cafe.

“The insurance money is paying their wages, but they want to come in anyway,” Sid shrugged. “Some days we have 25 people in this kitchen.”

At almost any other restaurant you would wonder what so many chefs could be doing all evening but here, when a new dish arrives, you’re more likely to think, “How did they manage to make that with only 25 chefs?”

Sid’s food has always, famously, been “art on a plate” but that phrase tends to conjure a painting — a vivid creation in two dimensions with the added culinary bonus that you get to remix the colours with your fork then, eventually, take a mouthful.

In fact it’s more useful to think of Sid’s creations as sculptures — the plate isn’t flat, the food isn’t flat and often as much thought has been put into the depth and texture of a dish as it has to the colour.

He thinks about framing too — Sid was one of the first to commission his own crockery, and the experimentation continues here; one of the plates — a sort of depressed ellipsoid — looks like it’s been designed by an astrophysicist to demonstrate the shape of the universe. To see the closest thing to the shape of Sid’s apple dessert, google “Bilbao Guggenheim”. 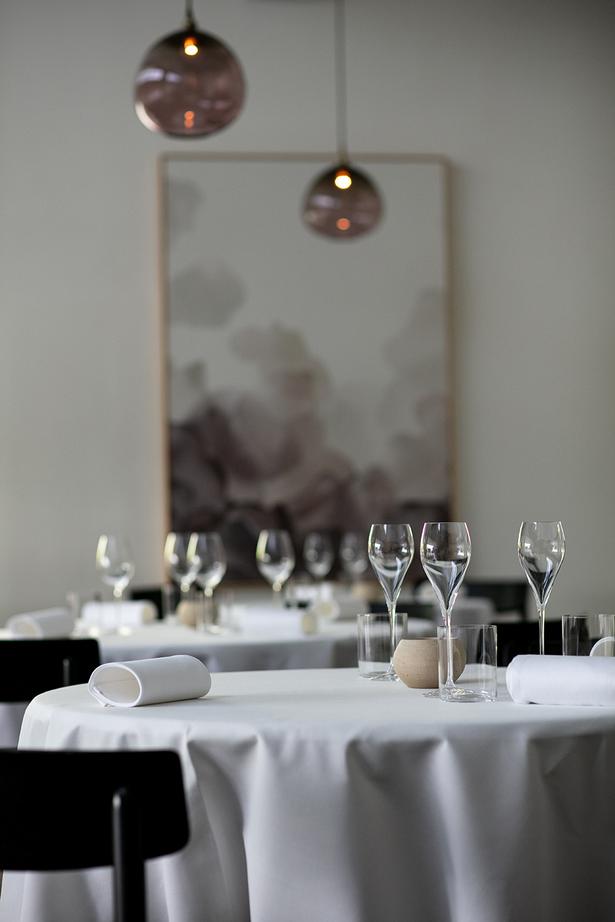 "Plenty has been said about what a lovely room this is, and the view of the courtyard was even better on the night we visited." Photo / Babiche Martens

As its name indicates, the restaurant is grounded in French techniques, but the food is increasingly liberated from these traditions.

Sid’s head chef Luka Kawano is of South American/Japanese descent and he’s been encouraged to bring his heritage to the cooking he does here (“He has so many bags of strange ingredients, we’ve given up asking,” reports one waiter).

So while, for example, there is still bread and butter, that butter is now cultured with koji (“Japan’s national mould”).

In return, Luka nudged Sid to dial up his own Indian influences, leading to the beautifully juicy signature lamb (poached in a sous vide, seared, rested for half an hour then warmed over charcoal) garnished with curry leaves and served with an incredible, spicy, cashew-fenugreek cream.

In modern fine-dining tradition, mains tend to be built around two pieces of meat protein: one piece of rare lean muscle and a second, slower cut (loin and rib with the lamb, breast and thigh with the duck) but there is a full vegetarian degustation available too and you’re encouraged to order a dish from it if you want. We chose a chargrilled lettuce with more of that koji butter and finger lime.

I’ve eaten maybe 20 meals at Sid’s restaurants over the years and each time he serves at least one dish that is just jaw-droppingly good — the sort of dish that would stand out at The French Laundry or Attica or Nobu (I’ve eaten at all these brilliant places and ate nothing better than one of these “Sid moments”).

This time it was the scampi, which arrived on that mind-bendingly mathematical piece of pottery I described earlier; the seafood was hidden beneath a jet-black sheet of squid-ink gel, and in place of that slow meat cut was a fragment of crunchy tempura eel.

I can still feel the scampi between my teeth — cooked to tender but still with a little of the raw delicacy you get with a lovely piece of sashimi shellfish (given that it’s in the oven for less than a minute, the margin of error must be around a quarter of a second here). 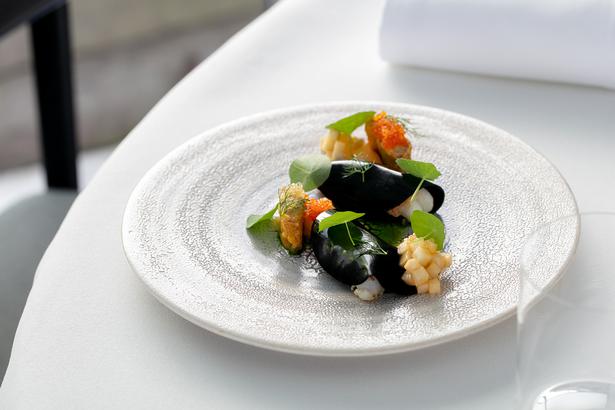 The scampi shell and head aren’t discarded, but used to create an oil that flavours other components of the dish — mixed to create an emulsion with mustard and garlic, and stirred through finely diced green apple which, with dill oil, completes the dish.

If you’re looking for something to complain about, you’re left with not much but the price of the wine list — my dinner guest Nadia asked for a white wine to match her monkfish and they poured her a $33 glass of chardonnay. With food prices and wages rising uncontrollably it seems to me that good value wine is a quick win, though of course there should be premium options.

Plenty has been said about what a lovely room this is, and the view of the courtyard was even better on the night we visited, as a chef worked a portable tandoor oven for a small group of Cassia devotees enjoying a pop-up experience.

Plenty has been said too about the service — each staff member equipped not just to describe but have an opinion on the various elements of the menu.

But if you think you already know about The French Cafe’s food you might find yourself surprised.

No artist is satisfied repainting his classics; Sid is a chef who still has plenty in his imagination to explore.