If the bubbles that have dominated most thoughts of late are the ones we’ve been living in, there’s hopefully something we can toast, even if it’s just the passing of 2021.

There’s good news on the fizz front, as there has never been a more delicious and diverse array of sparkling wines to enjoy in Aotearoa.

Here’s a selection of the best from my blind tasting of bottles from across the world. Their corks are definitely worth popping, to cheer the spirits if our parties must be virtual, or celebrate with on the return to fully social occasions.

STYLE GUIDE: WHAT'S IN A STYLE?
Sparkling wines are made in a wide variety of ways that dictate their flavour, quality and price. It can be confusing, so here’s a rough guide to styles and terms you might see on a bottle that suggest the kind of wine you might find within.

Traditional Method
Most of the highest quality sparkling wines, including Champagne and cava, are made by the traditional method, also known as methode traditionnelle. It’s an elaborate system that adds to the cost of the wine, but is widely regarded to create the most complex flavours and finest mousse (bubbles).

A second bubble-inducing fermentation is triggered in the bottle, followed by a period when the wine remains in contact with its yeasts. These impart complex bready and nutty flavours to the wine depending on how long it remains on these yeast “lees”.

The yeasts are then removed by a lengthy process of “riddling” that gradually shifts the yeast into the neck of the bottle, which is then frozen. The frozen plugs of yeast are removed, the bottle topped up and then re-stoppered in the wine’s “disgorgement”.

Some examples state a disgorging date, which provides an idea of a wine’s maturity — recently disgorged can mean fresher flavours, and older more toasty notes.

Bottle Fermented (Transfer Method)
If it’s traditional method, most wineries trumpet this. So if you see “bottle fermented” on a label, this suggests the wine has likely been made by the slightly simpler transfer method. Sparkling wines made in this manner can still be very good, but are cheaper to produce than the traditional method. This is basically identical to the traditional method up to the point of riddling, when the bottles are instead disgorged into pressurised tanks, where they’re filtered. They’re then re-bottled in a new bottle.

Tank Fermented
Less likely to appear on a label, but influencing the final flavour, is the Tank Method. Also known as the charmat or Martinotti methods, or cuve close. The wine’s second fermentation takes place in a pressurised tank rather than a bottle, and the final fizz bottled under pressure. You don’t get the yeasty character of bottle-fermented methods, but this is often preferable for more aromatic grapes and fresher styles, such as the prosecco that’s made this way.

Methode Ancestral (Pet-Nat)
Undergoing a revival currently is the methode ancestral, responsible for the petillant maturels (pet-nats) that have burst onto the natural wine scene in particular. Likely the oldest way of making sparkling wine, the wine is bottled while still undergoing its first fermentation. This finishes in-bottle, producing its effervescence.

Some winemakers choose to leave the yeast in the bottle, leading to a cloudy appearance and the possibility of drinking a bottle at different stages on its path to dryness. Others filter or disgorge and rebottle for a clearer and more consistent end product.

Champagne (NV and Vintage)
Champagne can only come from the eponymous region in north-eastern France. Its name, synonymous with luxury and celebration, is protected in law and cannot be borrowed by wines from elsewhere. Its wines have to adhere to strict criteria, which includes bottle aging of 15 months for non-vintage wines (NV) and three years for vintage.

Its chilly climate makes it a challenge to ripen grapes, which has led to the practice of blending wines from multiple vintages, with vintage wines being made with only the best grapes in the best years.

The practice of making and labelling sparkling wines as “NV” has been adopted beyond Champagne and tends to suggest the tier below a winery’s more premium “vintage” release.

There are also descriptors highlighting levels of sweetness. The most common is Brut for dry to off-dry, with the likes of Demi-Sec, meaning sweet and Doux, lusciously sweet.

A growing movement towards near bone-dry styles means seeing more bottles sporting terms such as Ultra Brut, Extra Brut, Brut Nature and Zero Dosage, which signal the driest of the dry. Detergent is the enemy of effervescence, so always rinse your sparkling glasses in warm water to get rid of any residue. Photo / Getty Images

WHAT'S IN A GLASS?

Wisdom on what makes the best glass from which to drink sparkling wine has shifted over the years. Certainly, the wide-rimmed shallow coupe popular in the early 20th century has fallen out of favour, for good reason.

These may work to some extent for softer, sweeter styles, but the wine’s large surface area in these means bubbles swiftly dissipate and they go flat quicker. The narrow shape of the iconic flute fares far better for retaining effervescence, but also suppresses aromas.

Current thinking on the foremost stemware for fizz, particularly the more complex traditional method wines, is a tulip-shaped glass with a wider middle and a narrow top. Similar to a white wine glass, it provides a slightly larger wine surface area than the flute and has a shape and greater space above the wine conducive to funnelling aromas up beyond its rim.

It’s also supported by findings of the rigorous research currently being conducted on bubble behaviour, by the likes of Champagne physicist Dr Gerard Liger-Belair at the University of Reims in Champagne.

The Comite Champagne, which represents independent Champagne producers, now officially recommends a tulip-shaped glass in which to enjoy its members’ wines. Something like Riedel’s egg-shaped Veritas Champagne Wine Glass fits the bill ($113 for 2 stems from Kitchenware.nz). However, the flute still works fine for simpler fruit-driven styles, such as prosecco.

You can enjoy fizz from a standard white wine glass. However, it’s still optimal to use a glass that’s been designed for sparkling wine as this will contain a “sparkling point”. Bubbles attract and carry aromatic compounds to the surface of the wine and need somewhere to start.

In sparkling glasses they’re directed from a single point etched on the bottom of their bowl, rather than forming randomly off the likes of fibres left in a glass from tea towels.

Whatever glass you choose, there are further ways to ensure you maximise your bubble count. Detergent is the enemy of effervescence, so always rinse your sparkling glasses in warm water to get rid of any residue. If you dry them manually, make sure it’s with a lint-free cloth to avoid unruly effervescence!

THE BEST SPARKLING WINES OF THE SEASON: FRANCE’S FINEST 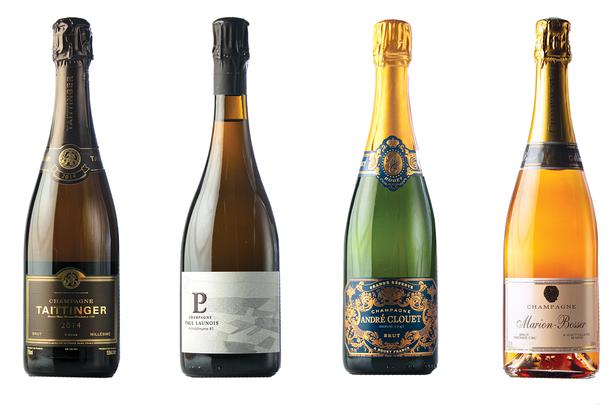 1. Taittinger Millesime Brut Champagne 2014, $125
This Grand Cru-dominant blend is made only in the best vintages and aged five years on its lees to gain added complexity. The result is a Champagne with great intensity and finesse, with elegant and crisp notes of red apple and citrus, hints of apricot, mineral and blossom, over a subtle hazelnut base. Stockists: Countdown; Glengarry; Vineonline; Fine Wine Delivery; Vintners.nz

2. Paul Launois Monochrome #1 Grand Cru Extra Brut Champagne NV, $82
This stylish Champagne is an exciting new find: from third-generation growers Julien Launois and his wife Sarah, who started making wines in 2015 from their small family estate in the Grand Cru village of Le Mesnil-sur-Oger. The Monochrome #1 is an impressive ultra-dry 100 per cent chardonnay, with a pure and poised palate of crisp apple and lemon, hints of almond paste, acidity and an intense flinty minerality. Stockists: Barewine.co.nz

3. Andre Clouet Grande Reserve Brut Champagne NV, $68
A 100 per cent pinot noir Champagne that offers great value. Its attractive notes of apple and stonefruit are underpinned by rich toasted brioche and hazelnut notes. All this is supported by a fine and fresh line of lemon and mineral salts and a fine mousse. Stockists: Black Market; New World; Dhall & Nash

4. Marion-Bosser Premier-Cru Brut Rosé Champagne NV, $90
Marion-Bosser’s impressive grower Champagnes are made by the mother and daughter team of Bernadette and Elodie Marion in the Premier Cru village of Hautvillers. Their elegant and fresh rosé Champagne combines delicate raspberry and redcurrant fruits with a suggestion of apple and almond pastry. Stockists: Threefrenchvines.com; Winedirect.co.nz; New World 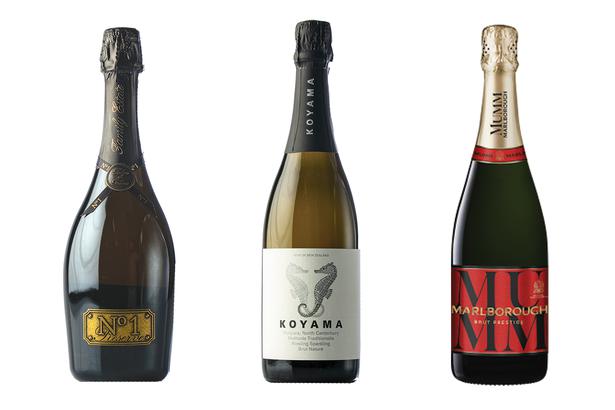 5. No 1 Family Estate Reserve Marlborough Blanc de Blancs NV, $96
It’s perhaps no surprise that one of the top wines in this year’s sparkling tasting is made by a 12th-generation Champagne winemaker. Daniel Le Brun crafts this exquisite Reserve example in Marlborough, which layers white flowers, white fruits and citrus over subtle nutty, biscuity nuances, wrapped in a creamy mousse. The release is limited to just 1000 individually numbered bottles. Stockists: Glengarry; No1familyestate.co.nz

6. Koyama Waipara Methode Traditionnelle Brut Nature NV, $45
A delicious bone-dry pinot noir-dominant blend made in tiny quantities by Takahiro Koyama, in which rich notes of gingerbread and toasted breadcrust are counterpoised by a powerful line of lemony acidity. Koyama has had a growing focus on sparkling wine with his original label and at Mountford Estate, which he now also runs, and this is a fine addition to Aotearoa’s sparkling scene. Stockists: Great Little Vineyards; Hamilton Beer & Wine Co; Star Superette; By the Bottle; Natural Liquor 10. Morton Estate Brut Methode Black Label NV, $20
Ridiculously good value for a traditional method sparkling wine, Morton’s pink-tinged crowd-pleaser ushers in baked apples, juicy lemons and a touch of toastiness. Rumour has it, its price may be rising soon, so stock up for the festive season and beyond. Stockists: New World; Pak’nSave; selected specialist liquor stores 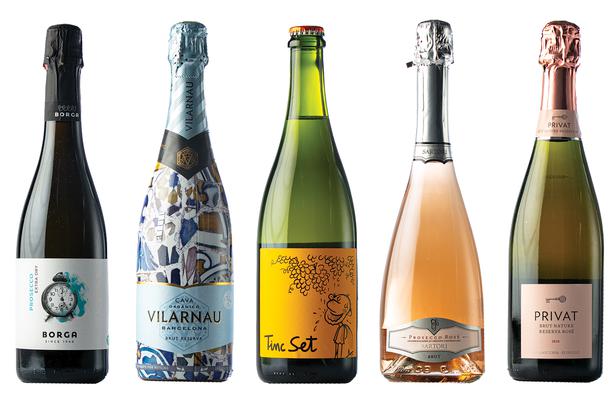 11. Borga Prosecco Extra Dry, Italy NV, $25
Light, bright and bone dry, this is a lovely expression of prosecco from a family-run estate in the Treviso region of Veneto. Its crunchy green apples and mouth-watering lime join hints of stonefruit, perfumed with a touch of jasmine. Stockists: Caro’s

14. Sartori Prosecco Rosé Brut, Italy NV, $25
Following the popularity of prosecco and the fashion for drinks pink, prosecco rosé became an official denomination in Italy last year for bubbly made from the traditional white prosecco grape Glera and a dash of Pinot Nero (pinot noir) for colour. While some “ro-secco” can be on the sweeter side, the Sartori is a more serious dry style that’s fresh, citrusy and moreish with strawberry scented with rose. Stockists: New World; Dhall & Nash

Planning a virtual happy hour? These businesses bring the drinks to you

From buying right to perfect pairings, Benoit Gouez lifts the curtain on the wonderful world of Champagne