With its rich mineral, fibre and water content, the watermelon is nature's healthy treat for summer Energy, hydration and sweet deliciousness... it's no wonder the humble watermelon is a favourite summer fruit the world over. Picture / Supplied

A tattered copy of the Guinness Book of World Records recently surfaced, and my boys and I were reminiscing about all of the records they were certain they could break when they were younger. They tried their hardest to beat the most underpants worn at one time, the tallest stack of pancakes and the most capital cities named in one minute, obviously all in vain.

Of all the possibilities, though, spitting a watermelon seed the farthest always seemed like the most attainable for an enthusiastic little boy. The night we unearthed the old book, my guys decided to see whether they could finally crack that world record and perhaps land a watermelon seed off our deck through the basketball hoop. They were disappointed when they realised that the record-setting seed travelled 20 metres, substantially farther than either could muster even with all their teenage muscle and bravado.

Watermelon, along with ice cream, simply screams summer. Watermelon, once used to treat children with heatstroke, is 92 per cent water and considered a cooling food.

Water-rich foods such as watermelon, strawberries, cucumbers and peaches tend to be harvested in the summer because nature intuitively knows that our bodies need that extra hydration. Eating a few slices of watermelon can be equivalent to drinking an extra glass of water. Not a bad idea on a sweltering summer day.

Summer-harvested foods also tend to be higher in the carbohydrates and natural sugars needed to fuel our extra activity. I have heard people claim that watermelon is so high in sugar that it should be treated as candy or a sugary treat. This is just not true.

Unlike candy, the sugar in watermelon is a small percentage of the overall volume of the fruit, and there is fibre to help slow any rush of sugar into the blood system, affording the body time to use this sugar in a productive way. Watermelon also has many nutrients, which we cannot say is true of candy. Watermelon has less sugar per serving than many other fruits, including grapes, apples and pears.

Watermelon is a natural sports drink in that it offers high water content, natural sugars, and minerals such as calcium, potassium and magnesium. Watermelon is extremely high in lycopene, one of the most powerful antioxidants shown to fight cancer, strokes and ageing.

The fruit is also high in beta carotene, another antioxidant important for immunity, cancer prevention and eyesight, and also vitamin B6 for brain health. Two cups of watermelon provides 21 per cent of the recommended daily amount of vitamin C, which boosts immunity and keeps our cells healthy.

The fruit provides 18 per cent of the recommended daily allowance of vitamin A, important for eyesight and skin. The water content and fibre aids in healthy digestion, and to top it off, watermelon provides citrulline, an amino acid that converts to arginine in the body and ultimately supports blood vessel health.

This doesn't sound the least bit like a sugary treat to me. Nor does it sound like kid food. This sounds like a universally healthy food.

When buying a watermelon, note that a heavy fruit signifies ripeness and high water content. A fully ripened watermelon makes a hollow, deep sound when tapped, and red flesh indicates ripeness, sweetness and more nutrients than pink or white flesh. An uncut watermelon should be stored in a cool corner of your home. 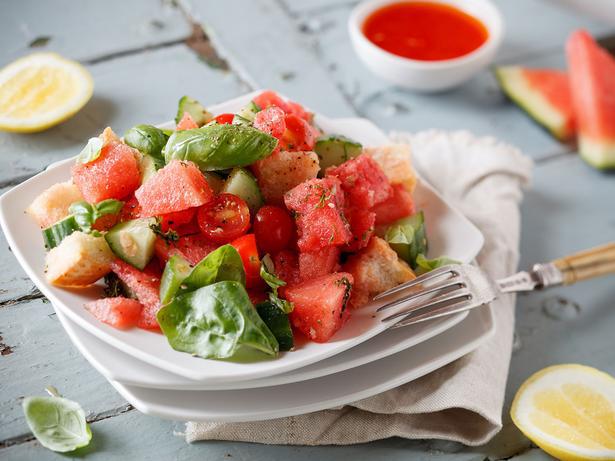 We all know kids enjoy a slice of watermelon on a hot summer day, but shake it up by blending the fruit with ice to make a natural Slurpee or by freezing pureed watermelon as an ice pop. Watermelon is delicious over salad and pairs well with feta cheese, mint and jalapenos.

It takes on a different flavour when brushed with oil and grilled. We have started freezing watermelon chunks to add to smoothies, our favourite of which includes a splash of almond milk and fresh mint.

Lore has it that watermelon was put in King Tut's grave because he needed energy and hydration for the afterlife. If that's not an endorsement to buy some during the hot, sluggish days of summer, then I don't know what is.

This watermelon, blue cheese and pea salad makes for a fresh starter

Summery salad for a refreshing lunch