As the months get colder the wines we choose should get bolder to match the robust fare of the season. Here are 12 hearty reds covering the rich, ripe and savoury spectrum that should make for delicious winter drinking.

Riper characters in a wine tend to be the product of warmer climates, such as Australia, South America and the Mediterranean. They’re also to be found in wines from cooler parts of the world in warmer years, such as the 2013 vintage here in New Zealand, which saw many impressive examples produced across the country. Wines made in this weightier style can handle the often intense and assertive characters of winter cuisine: think fuller-flavoured dishes and red meats, such as beef and lamb.

Maude Central Otago Pinot Noir 2013 $36
Central Otago produces some of the world’s most vibrantly fruited and intense pinot noirs, which means they can work well over the winter months. This plush, supple specimen is cut from a classic Otago cloth, with a lovely concentration on its ripe cherry fruit laced with liquorice spice. From maudewines.com and fine wine stores. 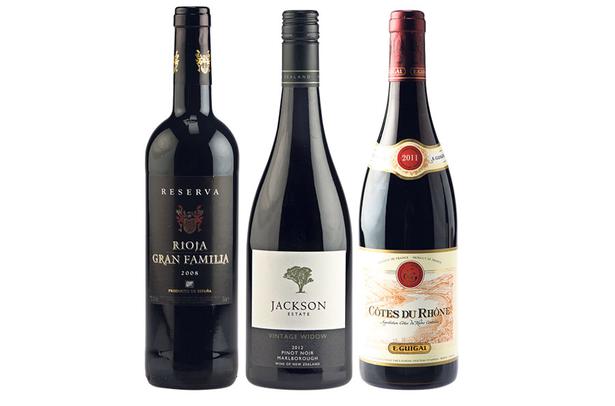 At this time of the year, there’s often an earthy character to the foods we crave — found in the likes of game, mushroom dishes, casseroles, slow-cooked meat and pies — making wines with a more savoury profile the best matches for these dishes. A variety such as pinot noir might produce lighter wines, but can often exhibit a savoury gamey character that’s in harmony with these flavours. Age can also accentuate this character in a range of reds, which soften and develop notes of forest floor making winter a great time to bring out those older bottles you’ve squirrelled away in the cellar.

Gran Familia Reserve Rioja, Spain 2008 $19.99-$24.99
Mellow and mature, age has bestowed a soft, spicy and savoury profile to this rioja with its meaty notes and ripe red fruit. From fine wine stores including Glengarry, Accent on Wine and Fine Wine Delivery Company. Richness is a trait that often goes hand in hand with ripeness in terms of both style and provenance. The wines in this section have been grouped together for their sheer concentration. The table wines are perfect partners for red meats, while the port pairs well with rich chocolate desserts and stronger hard or blue cheeses.

Bodegas Mustiguillo “Mestizaje” El Terrerazo 2012 $34-$36
Bodegas Mustiguillo has championed the local bobal variety, which goes into this densely fruited and fragrant wine along with garnacha, syrah and merlot. Aromas of star anise, violet and incense thread its ripe, concentrated blackberry and blackcurrant-fruited palate. From The Village Winery, stvincentscave.com

There's nothing like a hot soup to ease those winter chills