Church Road Hawke’s Bay Syrah 2013 $19.99
At less than $20, this sensational syrah could have gone into the budget buys section, but stands proudly with its peers at far higher prices with its supple, bright and juicy boysenberry and plum fruit, laced with aromatic florals, black pepper and spice. (SWNZ.)

Babich “Irongate” Gimblett Gravels Hawke’s Bay Cabernet Merlot Franc 2014 $37
Honed over three decades and delivering a density and refinement that regularly sees it top of its price bracket, Babich’s Irongate blend is back in the Top 50. Smooth and concentrated, its pure dark fruit and notes of bitter chocolate are supported by velvety tannins. (SWNZ.) 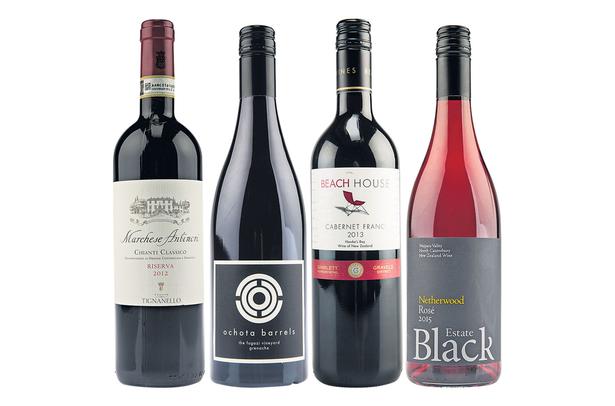 Marchese Antinori Chianti Classico Riserva 2012 $48
A classic chianti from this famed Tuscan house, with lots of lovely weight to its palate of supple and juicy cherry fruit and aromatic notes of tobacco and licorice spice over a base of savoury and game.

Ochota Barrels “The Fugazi Vineyard” McLaren Vale Grenache 2014 $59.99
Another sensational example from the new wave of Australian wine, or should I say hardcore, going by the punk-inspired name of the vineyard that produced this gorgeous Grenache. However, there are no rough edges to this ethereally textured wine from 66-year-old dry-grown bush vines, with its succulent and lifted cherry and raspberry fruit infused with notes of fennel and sweet spice and the lightest lick of tannins. (Organically farmed.)

Beach House Hawke’s Bay Cabernet Franc 2013 $25
Cabernet Franc is a variety that’s most often part of a Bordeaux blend in New Zealand. However, there are a handful of examples here in which it goes solo, such as this fresh and fragrant Franc that really sings with its juicy and supple cassis and black berry fruits and aromatic notes of capsicum and herb. (From beachhouse.co.nz)

Black Estate “Netherwood” North Canterbury Rosé 2015 $30
So much more than simple sipping, this intriguing rose offers far more interest than many. Created from co-fermenting chardonnay and pinot noir planted together in Black Estate’s Netherwood vineyard, it’s been left far longer than most rosés with its skins, which impart colour, flavour and texture that makes for a deeply coloured rose combining the style’s crisp citrusy appeal with distinctively pinot noir-like characters of rose, spice, cherry and raspberry fruit. (Certified Organic).

Satisfy your sweet desire with this tasty dessert

Tickle your partner pink with a bottle of rosé on Valentine’s Day.