"I used to eat this soup in my student days in Jerusalem in the late 80s at a restaurant called Ima — yes, there is an Ima in Jerusalem too, run by a great cook from a Kurdish background," says Yael Shochat of Auckland's Ima Cuisine on Fort St. "It’s really nurturing: full of greens in a rich chicken broth with a lemony flavour, and the beef dumplings make it into a really wholesome meal. 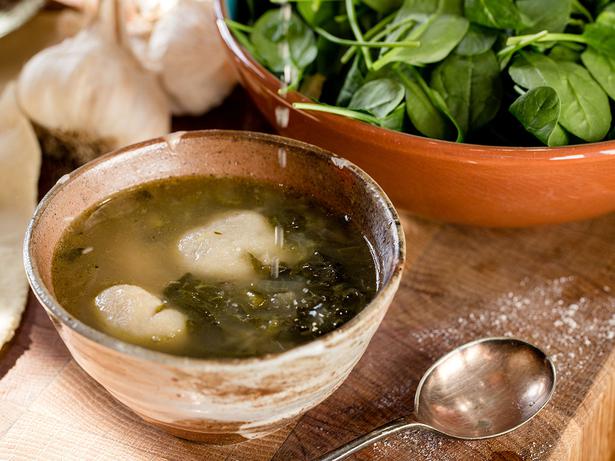 Make the kubbeh
1. Finely chop the onion, celery, and garlic. Heat 1 Tbsp of oil in a large frying pan on moderate heat. Add the onion and celery and saute until soft, about 10 minutes. Add the garlic and saute for a further 2-3 minutes until softened. Add the beef, spice mix, and one tsp of salt and saute for 10 minutes, stirring frequently, until the meat has browned. Set the filling aside to cool.

3. Roll the dough out until 3mm thick. Use a cookie cutter or a large glass to cut out 10-12cm rounds. Place a heaped tablespoon of filling onto each round. Gather the edges together and pinch to seal. Lie the dumplings seam-down on a lined tray until ready to use.

2. Heat the oil in a large heavy soup pot and saute the leeks until soft, about 10 minutes. Add the celery and saute for a further 5 minutes. Add the turmeric and cumin and saute, stirring frequently, for another 1-2 minutes to toast the spices. Add the stock, and stir well to deglaze the pan. Bring the soup to a boil then reduce the heat to simmer. Add the courgettes and silverbeet greens, and simmer for 15 minutes.

3. Add the dumplings to the pot and simmer for a further 15 minutes, stirring gently as needed to prevent the dumplings from sticking to each other. While the dumplings cook, finely chop the mint, parsley, and spring onion and divide between the serving bowls. Ladle the hot soup and dumplings on top and serve with a wedge of lemon.

Fire Up The Barbecue With These Grill-Friendly Recipes