"It’s like looking into an endless pool of mirrors, you can really get drawn into the diamond,” says Mike Asscher, vice-president of the Royal Asscher Diamond Company. “There’s something truly magical… the sparkle, the life, the intrigue, the reflection that you see; that is something you don’t have with other gemstones.”

With a family history in the trade going back more than 160 years, this urbane Dutchman is the perfect person to share sparkling stories. It was his great-great-grandfather who cut the Cullinan diamond to form part of the priceless Crown Jewels. The largest gem-quality rough diamond ever mined, it weighed 3106.75 carats (just over 620g) and yielded nine major fancy cut stones and a stack of smaller sparklers. The sort of sizes those of us who aren’t royal or mega-rich might aspire to own.

For, as Mike says, diamonds have a mesmerising and global appeal, reinforced by their symbolism as the stone of eternal love. He fell under their spell as a child and has worked in all aspects of the family business, starting with polishing stones 20 years ago.

As the first company to patent a diamond cut, back in 1902, Asscher deals at the upper end of the market. A reputation for innovation won it the commission from De Beers in 1905 to cut the Excelsior, then the world’s largest known diamond. This was followed a few years later by the mighty Cullinan, discovered in South Africa and gifted to the British monarch.

Mike is intent on advancing Asscher’s cutting-edge reputation. As well as being responsible for growing lucrative trade in Asia, he continues the firm’s pioneering tradition of developing distinctive diamond cuts, including refined cushion and feminine oval designs. His recent first visit to Auckland was to introduce the Royal Asscher cuts here, through exclusive local stockist Partridge Jewellers.

“We cut for beauty not yield,” he says, explaining that the patented styles are designed to maximise each stone’s appeal and intrinsic value — by creating those endless sparkling pools to dream over. Size is not all, it seems; a well-cut stone can flatter to deceive, delivering greater sparkle than a less multi-faceted example. Matching a stone to the wearer isn’t just about finding the size and shape they like, but also the cut that suits their personality.

A popular innovation has been the Royal Asscher brilliant cut, which debuted several years ago in recognition of the popularity of round diamonds worldwide. It contrasts in style with the classic Royal Asscher [square] cut, a 1999 update on the first patented Asscher cut, itself a precursor of the emerald cut, which became so popular in the Art Deco era.

“It’s a unique product, it’s a perfectly symmetrical square diamond,” says Mike of the defining Royal Asscher style. “It has dramatically cut corners, but it is step cut, instead of brilliant cut so the light reflection is totally different than any other cut in the world. What we try to do is get the brilliance and fire from the round brilliance cut, but the rainbow effect that you get from the emerald cut, but with more facets than the generic emerald. That combination makes it so unique.”

Much of the firm’s global business is selling diamond rings in the one to three carat range — “available and affordable for a lot of different people,” says Mike. There is a cut-to-order programme for stones over five carats. From mine-to-market — or may we suggest the sexier sounding source-to-sparkler — a consumer can choose to have their choice of diamond (in the four cs of carat size, colour, clarity and cut) and creation into jewellery tracked and captured on video. 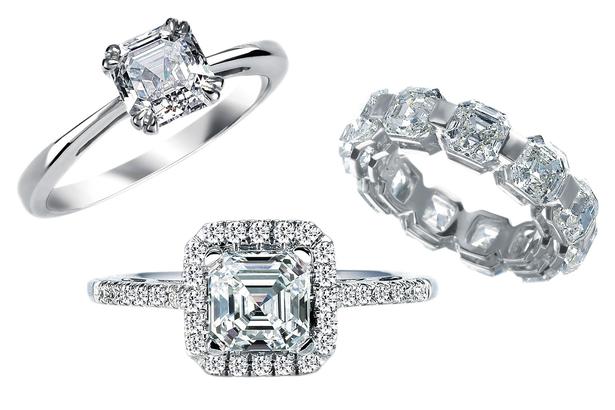 Mike has personally handled the world’s fifth largest stone, a 10cm-long chunk discovered in Africa several years ago, but he was in no hurry to volunteer to try to cut it. He doesn’t have the skill or patience of his ancestor for hands-on work. “I once had to cut 10 stones for education purposes and after the fourth or fifth stone I tried to put a little more pressure on the stone to speed up the process, and if you do that long enough the diamond will explode — and it happened and eventually I had nine stones and a very small one because I still had to finish it.”

His great-great-grandfather studied the Cullinan diamond for about a year. “The difficult part was it was heavily included, it had a lot of irregularities and fault lines and break lines.” The aim: to ensure that after initially cleaving it in two, subsequent cuts would maximise the rough stone’s potential. The result: a triumph, with a third of the rough diamond able to be hewn into huge gems of rare clarity, minimising wastage.

Cullinan 1, or the Great Star of Africa, is the 530.2 carat rock in the Sovereign’s Sceptre with Cross. Cullinan 2, at 317 carats, sits front and centre in the Imperial State Crown, below the Black Prince’s Ruby. Both are on display at the Tower of London when not required for state ceremonies.

During an official visit to the Asscher company in Amsterdam in 1958, Queen Elizabeth II told Mike’s forebears that the fondness of her own grandmother, Queen Mary, for decking herself in Cullinan III and IV was why the stones were known in the royal family as “Granny’s chips”.

Clever design allowed them to be variously clipped in and out of metal frames on crowns, tiaras and stomachers or hung from a clip. The Queen wears the weighty pear and square cut diamonds only on special occasions. The first time she wore them publicly was as a brooch, on that visit to Asscher.

READ: La-di-da Accessories To Buy If Money Was No Object

Despite these links with the British monarchy, it is through the Dutch royal family that Asscher later came by its royal title, granted in recognition of the company and the family’s role in the diamond industry. This was all but wiped out in the Netherlands in World War II, with family members and staff interned in concentration camps by the Nazis and property seized.

Those who survived, led by Mike’s great uncle and grandfather, rebuilt the business. Mike’s father, Edward, the current chairman, then took it forward, including as an industry champion of the Kimberley Process, eschewing the sale of “blood diamonds”, the illegal trade used to finance conflicts in Africa.

Mike’s sister, Lita, started an aid project in war-torn Sierra Leone and is a designer in the business. An older brother is not involved, but for Mike and his sister, the pride and passion runs deep.

“Buying a diamond is an emotional moment in someone’s life and that’s one of the most beautiful aspects of our business,” he says. “It’s a birthday, the birth of a baby, an engagement… that is something I really like.”

Learning about cultural tastes in jewellery is another aspect. “We see a lot of differences in terms of taste, in terms of styling.” With Royal Asscher diamonds sold through 300 stores worldwide and with its own boutiques in Amsterdam, Japan and China there’s plenty of chance to compare and contrast. In rings, Europeans favour more contemporary elegant styles, with not many small diamonds around the focal point. This is the way also in Australia, which he expects to be a foretaste of the styles that will likely prove popular here, mostly in the one to two carat range. In the US market it’s “the bigger the better”.

“There’s a lot of halos, which are the round diamonds around the stone, sometimes one, two, or three circles around the stone, a lot of diamonds on the shank.” The Chinese market is comparable to the US, whereas the Japanese prefer very delicate pieces, with simple bands and high clarity.

As to how big a ring someone can practically wear, Mike says: “You get used to size.” The largest in the production line is about 20 carats. For the likes of earrings and ancillary diamonds, sizes can start from as little as 0.2 carats.

He is personally more captivated by clarity and cut than size, but also loves fancy colours — drawn by the rarity of red, pink, blue and orange diamonds. (Red diamonds are the most valuable per carat, selling for about US$3.5 million, with the biggest known source, the Argyle mine in Western Australia, having only recovered a total of 24 carats in its history.)

While diamonds are a finite commodity, Mike expects that more large ones will be uncovered intact thanks to infra-red technology allowing mines to scan the earth in likely deposits, rather than relying on manual rock crushing. Over time, however, gem quality production will fall, meaning good pieces will always maintain their value.

Computer aided design plays a big part in assessing how best to cut large rough diamonds, which are typically opaque and cloudy. Where once a small window, or facet, would have been polished to improve the view inward and this, along with instinct, be used in determining cuts, a 3D image now plots inclusions and the computer calculates the best course. After modelling done by laser, this company likes to retain final cutting by hand.

“Diamond is a natural resource so you and I can see much more than a computer programme can, so eventually it’s better to be able to tweak it by one or two tenths of a degree to get an even better sparkle than to just follow the computer programme,” says Mike.

The intricacy of the Asscher’s patented cuts has proved a deterrent to copyists and a challenge to find enough good cutters. “Many factories, won’t do it, because it’s so difficult.”

Russia now controls about half the world’s large mines, joined by Africa, Australia (depleting fast) and Canada as major suppliers.

READ: Why Vintage Jewels Are In Vogue

Amsterdam and Antwerp have been historic centres of diamond trading for centuries and remain important at the top end, but Russia insists on manufacturing its own rough stones and India is a big bulk handler.

“There’s such a great gap in the market between where people really add value and into the fancy cuts,” says Mike, explaining the luxury niche Royal Asscher occupies. In the past, the company has collaborated with the likes of Tiffany and Bulgari, providing them stones, but it is now intent on promoting its own sparkling identity.

“We believe we do have the most beautiful diamonds in the world,” he says.

So what does the diamond expert buy himself? He chose his favourite square Royal Asscher cut for his wife’s engagement ring. This he designed together with an Italian brand. Her earrings are brilliant cut and, oh, after 10 years of marriage she also has a couple of pink diamonds.

• Partridge Jewellers is the exclusive New Zealand stockist of Royal Asscher diamonds. (Expect to pay $10,000 and upwards for a one carat ring, depending on quality.)

For their first collaboration, the jewellery retailer and handmade jewellery brand have released a limited edition collection c...

Life’s true luxuries lie in precious experiences, and dearly held pieces become even more special with every memory they conjure