Luxury brand Louis Vuitton has teamed up with influential artist Jeff Koons, for a marriage made in pop culture heaven Fashion and art collaborations are wide and varied but here's one of behemoth proportions: Louis Vuitton and Jeff Koons.

The luxury giant has teamed up with the 62-year-old New York-based artist for an exclusive 51-piece collection of bags and accessories, called Masters, arriving in Louis Vuitton stores worldwide from April 28. The unique collaboration utilises five paintings from Koons' 2015 Gazing Ball paintings - reproductions of classics - which make their way onto some of the brand's most iconic bags and accessories.

Known as an artist to the masses, Koons' work is equally loved and loathed for its tenacity and audacity, questioning the place of art in pop culture through his polarising portfolio of work across a career that spans over 40 years.

"My primary motivation was to celebrate life, to make something special. This is the time we live in," Koons explains of the collaboration. "I’ve been productive up to this point, and I really still have a chance to make things I want to make. And I wanted to make this special grouping of bags with Louis Vuitton."

The collaboration is no small feat, and has been two years in the making. Of the 35 paintings from that series, Louis Vuitton and Koons have highlighted five: Leonardo da Vinci’s Mona Lisa (1503-1506); Jean-Honore Fragonard’s Girl with Dog (c.1770); Peter Paul Rubens' Tiger Hunt (1615-1616); Vincent van Gogh’s A Wheatfield with Cypresses (1889); and Tiziano Vecellio’s (better known as Titian) Mars, Venus and Cupis (c.1546).

WATCH: An Interview with Jeff Koons for Masters

The Gazing Ball works began in 2013 as a series of plaster sculptures, fitted with a single blue mirrored ball and were described by Koons at the time as representing “a point of connection for the viewer”.

Its transcendent message also formed the inspiration behind Lady Gaga's Artpop album; the singer reimagined as a Koons sculpture, sitting naked, cupping her breasts, with legs apart and a blue mirrored ball strategically place between her legs.

"I wanted her there as a sculpture, as a three-dimensional type of form and with the gazing ball, because the gazing ball really does become kind of the symbol for everything - and this aspect of reflection that when you come across something like a gazing ball, it affirms you, it affirms your existence and then from that affirmation, you start to want more," Koons told MTV.

Two years later, in 2015, Koons added the 35 large scaled hand-painted works to the series, each fitted with its own blue reflective gazing balls sitting on shelves installed in the paintings, adding a 3D layer to the images.

He later described to the Guardian, at the time of its debut, that the balls were "devices of connecting…I want to participate; I always just wanted to be involved in a dialogue with the avant-garde. This is my family, these are the artists that I have interest in, the joy that has enriched my life…It’s not about being a copy. This is about this union, the concept of participating, the act of looking and the relationship between the pictures. Everybody’s in this dialogue of sharing enjoyment and pleasure."

The five paintings transposed onto iconic Louis Vuitton bags - the Speedy, Keepall and Neverfull - also feature a biography imprint of each Master on the inner lining, with their names in bold gilded metal on the outside.

"Having the names of the artists in reflective type is in a way performing a function like the gazing ball in the Gazing Ball paintings,” explains Koons. "But there’s also a reflective process about the person being interlinked with the bag. To walk around with something that clearly shows you believe in giving it up to things outside yourself - it’s another form of reflectivity."

Koons has also been allowed to reconfigure the famous Louis Vuitton monogram logo to bear his initials, representing a radical departure for the house which has never previously allowed its iconic pattern to be reshaped.

Each bag also carries a tag in the shape of an inflatable rabbit, an enduring motif in Koon's artwork over the years. 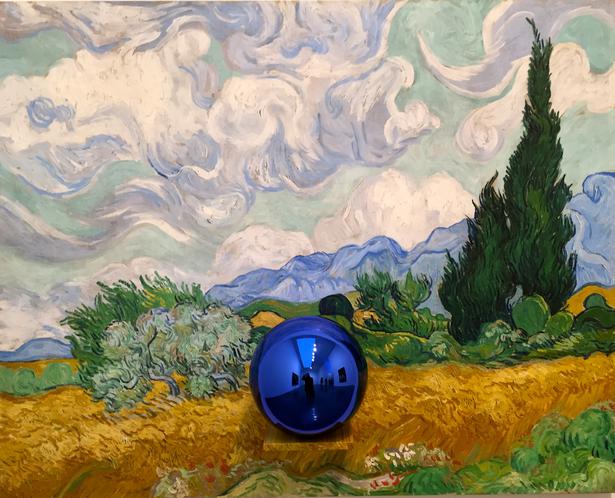 Koons' work can often be seen as polarising. His orange balloon dog sculpture is the most expensive artwork sold by a living artist at auction for US$58 million, and while some applaud his contributions to modern art, some view it as kitschy and crass. However, he maintains his work is a celebration of what it is to be human.

Louis Vuitton is no stranger to high-profile artist collaborations. Its luxury products have featured works and interpretations of the brand’s history from some of the most important artists working today including Japanese artist Yayoi Kusama's polka dot rendering of the classic monogram for spring/summer 2012; the nurses' uniforms and overlaid screen-printing from Spring/Summer 2008 via Richard Prince; Cindy Sherman's monogram project; Takashi Murakami’s cherry blossoms (Spring/Summer 2003) and Stephen Sporuse’s risque graffiti scrawls (Spring/Summer 2001).

Its close relationship with the art world culminated in 2014 with the opening of its cutting edge Fondation Louis Vuitton Art Museum in Paris, designed by high profile architect Frank Gehry.

There's no doubt this latest collaboration with Koons in its first phase (with a second expected to be announced in the near future) will continue to polarise opinion, but for now, it's a meeting of worlds like no other and a chance to welcome these classical names back into present day conversation. Watch this space.