Designer lifestyle hotel SO/ Auckland has opened its doors, designed in conjunction with World

As Viva revealed earlier this year, World is the signature local design partner, responsible for the uniforms and a special design print used across the hotel and inspired by Auckland’s volcanic topography. It’s a coup, putting World in very good company, with the seven other SO hotels open thus far calling on big names including Kenzo Takada (in Mauritius) Christian Lacroix (Bangkok), Viktor & Rolf (Berlin) and Karl Lagerfeld (Singapore).

World designer Benny Castles told Viva: “For a company like Accor to decide to put a SO/Hotel here, it’s a real badge of honour for the city,” he says. “Not that Auckland doesn’t sit alongside the other cities but where is London, Paris, Hong Kong? Where are your classics? I think that speaks quite truly to the SO/ brand.” 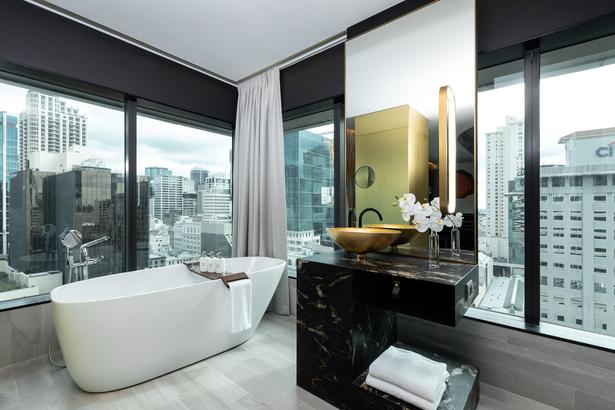 Guests will have a bath butler to facilitate the bath menu. Photo / Supplied

SO/ Auckland’s general manager, Stephen Gould, says the hotel’s arrival brings new design audacity to Auckland’s burgeoning hotel scene. “The decision to launch SO/ in Auckland comes at a time when tourism in New Zealand is booming and reinforces that this stunning natural beauty is also a bustling metropolis and the must-visit destination of the South Pacific.”

In all the talk about the swishy statement hotel interiors and the sweeping harbour views from the restaurant and rooftop bar of the newly opened SO/ Auckland, a few very important drawcard details have been overlooked. Beyond the oh-so Instagrammable public areas, guests will have a bath butler to facilitate the bath menu, a first in indulgent aromatherapeutic immersion. 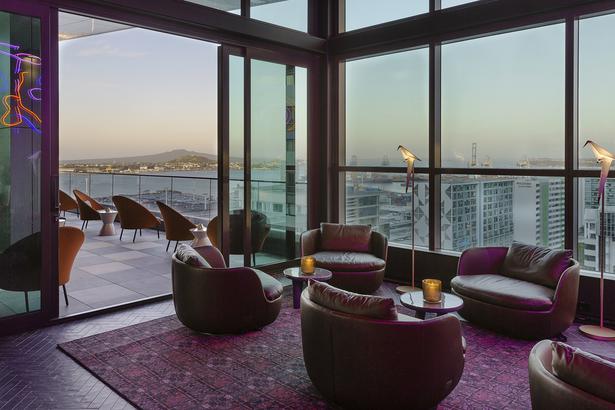 The Hi-So rooftop bar is a major drawcard. Photo / Supplied

The hotel’s spa is also a stunner, with a naturopath and yoga instructor among the specialists on staff. It is open for public bookings, so if you fancy a city escape without leaving home, consider an Urban Detox session or trying out the Tibetan Beats, a unique massage including sound healing and a customised crystal consultation for chakra balancing.

The major drawcard has to be that rooftop bar though, with its sweeping harbour views and curated cocktail list. The Hi-So rooftop bar has expansive views of the Waitemata Harbour and Rangitoto Island, and is a welcome addition to a city that's sorely lacking in rooftop fun.

From luxurious tropical bungalows to secluded snow-covered getaways, find a place to stay that's worth the journey