Each year when the Viva Luxury issue rolls around I am forced to confront deep philosophical questions about the nature of life. Questions like what is luxury? Ought we to celebrate it? And isn’t the deepest sort of luxury having a healthy family, closely followed by buying one of the light fittings at Sharondelier?

Last year for this issue I flew to Marlborough for lunch at a waterfront pop-up restaurant. In 2015, I was at the Sidart chef’s table for what was then Auckland’s fanciest degustation, though these days Clooney may give them a run for their money. This year my wife said, “How about Cocoro?” and, although it’s not the most expensive or opulent meal in town, I immediately knew what she meant. There is something unmistakably “splendifulent” about walking along this quiet residential street then opening the door to a beautiful Japanese restaurant staffed by crisply dressed, crisply spoken wait staff, who act as if they’ve been waiting since birth for you to arrive. 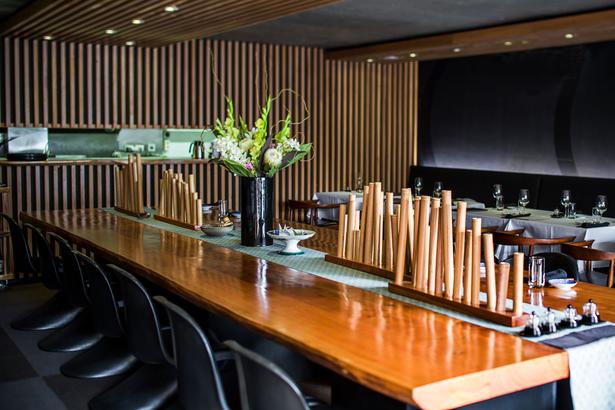 They’ve lost a restaurant manager since I was there last, and the overall experience misses him a little. One of the joys of the evening was always hearing him talk you through the winelist — wow, he really knew his stuff and he made you feel excited about every glass. Now it is the owner who runs the floor and although he, too, is lovely, he’s just a little less co-ordinated, physically and verbally.
“Ahhh, Jesse Mulligan,” he said when we walked in. Then, a few seconds later. “Should I acknowledge you? I don’t know.”

I tried to order a glass of manzanilla but he was having difficulty recognising the word. As a New Zealander who has visited Spain I am legally bound to alert people to this fact by pronouncing the ‘z’ like a ‘th’ and the ‘ll’ like a ‘y’, so the poor guy didn’t have it easy. But the last restaurant manager would have known the word immediately, would have known I was ordering the greatest seafood wine in the history of the planet, and would have also known that it tastes good only after two hours or more in the fridge. This pour was only just under room temp, however it came in a tiny wide-brimmed glass that, like everything at Cocoro, was elegant and perfect for the job.

The menu is overwhelming, in a good way. You can choose from a tasting menu, the traditional a la carte, and then there is a page of daily specialities which looks easily as good as either of the others. The only other time I’ve seen alfonsino on a menu is at Kazuya, that other magnificent Japanese-inspired restaurant, so maybe it’s a Tokyo secret. Anyway, we chose the degustation and trusted we’d get the pick of everything — that’s what a tasting menu is after all: the absolute best ingredients the chef could find in this city on this day, cooked using all of his or her skills.

The best Japanese chefs can take just one ingredient, break it open and examine it from all angles. Like here at Cocoro with chef Makoto Takuyama and his salmon, which is served in a familiar seared sliver but then garnished with a fragment of crispy skin, little bubbles of caviar and a tiny crunch of — well, there is no poetic way to say this — cartilage. There’s a little mustardy spice in the accompanying sauce, which is silken with liquid tofu. 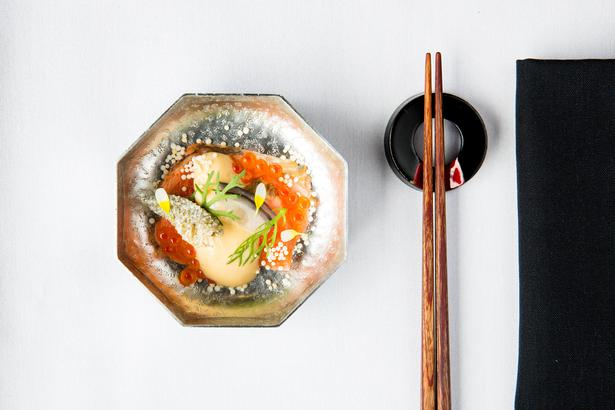 The salmon on the degustation menu. Picture / Babiche Martens

Later at dessert the focus is on sake, but instead of deconstructing that revered Japanese liquor, the chef instead pays tribute to it, using other ingredients to replicate the bubble of the ferment, the snow of the sake-making season and the peach aroma of a favourite brand. Icecream is made with the by-product of the brewing process, and together on a plate the whole thing creates a scene worthy of painting on a folding fan.

Every dish is small, precise and perfect. A scampi is shelled just so, in order that its flavour and particular slippery texture remain entirely true. Taking a spoon to a miniature bowl of savoury custard reveals tiny chunks of scallop and urchin beneath the surface. A white piece of fish is marinated in miso for three days then tempura fried just hot enough that none of the residue burns. A bento box folds open to sashimi, New Zealand wasabi root with its own grater and the greatest piece of sushi you’ve ever eaten — that alfonsino, smoked and lying lazy on a tasty thumb of rice.

It’s largely seafood on the menu, with a small and perfect lamb rack to finish. You can order a little eel if you’re still not full by the end and, by the way, what a great country we live in that the ultimate course of a supreme luxury degustation was a feed we used to catch with spears by torchlight in a muddy Hamilton creek.