Inside the Lush Hotel Where Rudyard Kipling Wrote 'The Jungle Book' The Jungle Look: An anodyne aesthetic this is not - bold decor is found throughout the Kipling Suite. Picture / The Telegraph

The most distinctive residence at Brown's Hotel, the suite is named after Rudyard Kipling, who wrote some of The Jungle Book between these very walls (immortalising his connection to the property, a 1919 letter written by the author hangs in its entrance hall). The suite has a colonial-era verve, conceived by Olga Polizzi, Director of Design at the Rocco Forte group. The bare necessities here include hand-painted wallpaper, plush velvets and Arabescato marble.

The suite: If you’ve ever wondered what it’s like to live in a Mayfair flat, this suite comes close to giving you an idea. It measures 155sq m – in real terms that’s a hallway, lounge, bedroom, toilet and a bathroom the same size as most basic hotel rooms in London.

Colour envelops you as soon as you enter: the hallway and bedroom are covered in Lewis & Wood wallpaper, an exotic riot of gold, green and teal flowers and brush strokes which create an optical illusion on four walls. The bedrooms is centred by a turquoise, velvet bed. It feels as though you could be in a palace of colonial India. 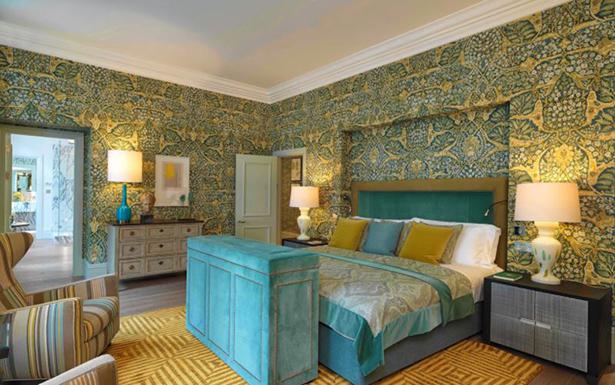 The bedroom. Picture / The Telegraph

Finished with original cornicing and panelling and facing Albermarle St, the double-height lounge bathes in the natural light that enters its floor-to-ceiling windows. This could be the home of a well-travelled and well-read Londoner: elephant statues, designer lamps, a bust of Lord Byron and books by English greats are peppered throughout: Austen, Shakespeare, Waugh feature, alongside, of course, different editions of The Jungle Book. The palette is fun, with orange velvet cushions, floral armchairs and paisley bedsheets adding to the mix of textiles. Artworks by Nino Longobardi hang on the walls.

The bathroom, in white-veined Italian marble, is a neutral break for the eyes, and features a double rainwater shower and big tub. This is a bathroom for lounging in: colonial rattan chairs have monogrammed terry-cloth cushions – no need to towel yourself dry here – and ample amenities, including bath oil and a candle, by Spiezia Organics. 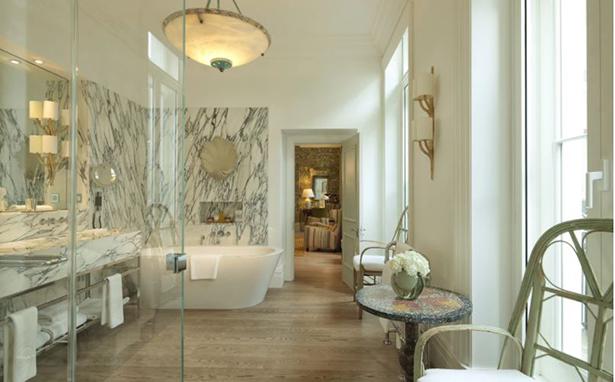 The spacious bathroom. Picture / The Telegraph

Staying in the suite gives you access to the hotel’s spa - two 30-minute treatments are included in the Kipling Suite rate, alongside a one-way airport transfer, unpacking and pressing services and a free mobile device for the duration of your stay. Four bedrooms can be added.

The hotel: "I don’t stay at a hotel. I stay at Brown’s" – such was the comment, legend has it, that Sir Winston Churchill made about his favourite London hotel. The roll call of past guests includes Agatha Christie, Theodore Roosevelt and Alexander Graham Bell, who made the first ever phone call here.

The hotel was one of London’s first, built in a single townhouse in 1837 – today, the hotel stretches across 11. Compared to the city’s other grande dames it’s more dinky, small enough to feel intimate but still grand enough to feel special – top-hatted doormen welcome you, the clink of afternoon tea is heard from the lobby and a line-up of modern British artists hang on the walls of public spaces, including Tracey Emin and John Rankin. 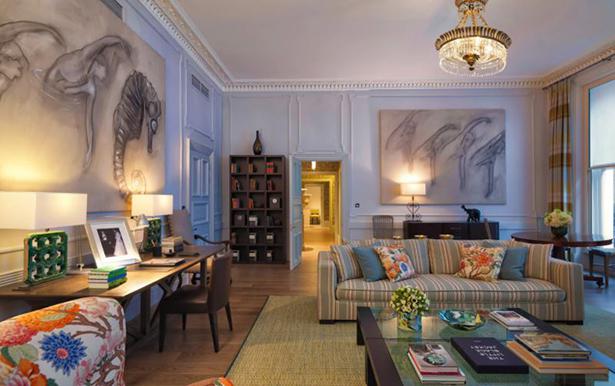 The lounge. Picture / The Telegraph

What to expect: A peaceful break from the hubbub of nearby central London. Double-glazing ensures a quiet night’s sleep. It’s very homely indeed, which isn’t always the case with headline suites at hotels of this calibre. The preference can often tend towards a neutral, business-like – and anodyne – aesthetic, in an attempt to be more catch-all. This is much more imaginative.

Though imbued with history, the suite has also kept up with the times: a 55” TV rises, as if by magic, from the foot of the bed at the touch of a button. Other modern conveniences are available, such as an international adaptor (with USB) and a Nespresso machine. 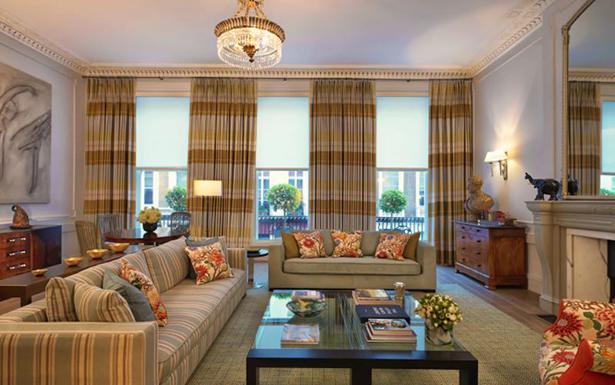 Standout feature: Not only the attention to detail of the pieces selected, but their playful nature: a monkey hangs above the door of the suite; there’s a huge Porta Romana conch light sculpture above the bath; and the portrait of a lady above the chaise longue in the bedroom, with her knowing, wry smile (said to be ‘Mrs Brown’), reminds you that this is not a place for seriousness.

Not so keen: The Juliette balconies are slim and dotted with orange trees, and therefore unusable, which is a shame. Also, my breakfast soldiers (which were had in the room), unfortunately had hard yolks, the result, potentially, of being brought to the suite in a heated room service trolley.

Location: It’s a five-minute walk from Green Park, placing you in the thick of Mayfair – it shares a street with Michelin stars (Gymkhana), independent art galleries and designer boutiques such as Alexander Wang and Victoria Beckham.