Queen Elizabeth's Imperial State Crown arrives at the State Opening of Parliament in the House of Lords, at the Palace of Westminster on May 27, 2015 in London, England. Picture / Getty Images It is rare to hear the Queen speak informally about her life and role in any context, but for her to reflect on the particulars of the British monarchy is practically unheard of.

It’s this that makes The Coronation, a BBC documentary to which I contributed a little historical background, so interesting.

In the programme, the Queen gives her first detailed interview about her 1953 ceremony and is reunited with the Crown Jewels she wore that day, noting that, “I’ve seen one coronation and been the recipient in the other, which is pretty remarkable.”

To many, it will be an education. If we try to summon up the British monarch’s Coronation Crown, we could be forgiven for picturing the headpiece worn by the Queen once a year at the State Opening of Parliament, the Imperial State Crown.

When I was a curator in the Tower of London’s Jewel House, it was to this that the crowds would flock. It is beautiful and stately, yet it isn’t the most important ceremonial item in the collection - or even the centrepiece of the Crown Jewels. That position belongs to St Edward’s Crown, which is reserved only for the act of coronation and has therefore gone unworn for the past 65 years. 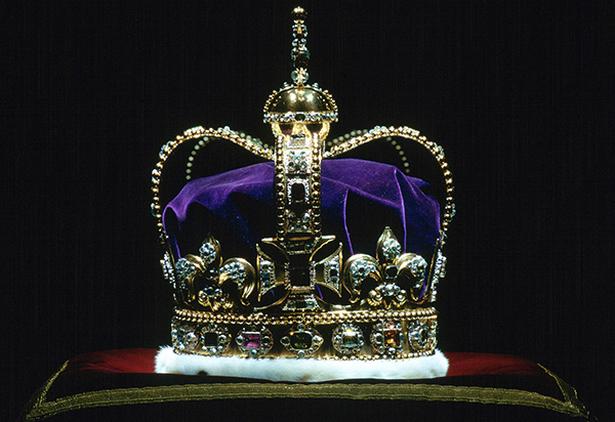 St Edward's Crown, the Coronation Crown Of England, made of solid gold and is currently set with 444 semi-precious stones. Picture / Getty Images

Even in footage of the Queen’s Coronation, she is seen wearing it only fleetingly before switching to the more familiar alternative (which would have fitted a lot more comfortably) to leave Westminster Abbey. At 11.8in (30cm) tall and 4.9lb (2.23kg), the St Edward’s Crown is far taller than the Imperial State Crown, and much heavier too. The bearskin hats worn by British Foot Guards are notoriously hefty; this is more than three times their weight.

St Edward’s Crown is depicted on royal insignia all over the Commonwealth, but is probably most regularly seen in this country brightly painted on the side of Royal Mail post vans. With two dipped arches topped with a jewelled monde and a cross pattee, it is a magnificent-looking thing, studded with 444 precious and semi-precious stones.

The original St Edward’s Crown was thought to have belonged to Edward the Confessor, who was canonised by the Catholic Church in 1161. As his crown, therefore, acquired the status of a holy relic, the monks of Westminster Abbey guarded it jealously and never allowed it outside the doors of their church - hence the need for a second crown. Like most of the regalia, St Edward’s Crown was destroyed after the execution of Charles I in 1649, so come the restoration of Charles II in 1660, a new iteration was required.

A search was launched to gather facts about what had been lost and a whole new set of regalia subsequently commissioned, including St Edward’s Crown for coronations, and the Imperial State Crown for other state occasions.

Charles II’s successors, James II and William III, made slight alterations to the Coronation Crown, but monarchs thereafter preferred to use their own, more contemporary versions for their ascensions. It was only in 1911 when George V, the Queen’s grandfather, came to the throne, that the tradition of using St Edward’s Crown was re-established.

Of the Queen’s two primary crowns, the Imperial State Crown has undergone the most changes. Thanks to general wear - not to mention the different head shapes of its wearers (“fortunately my father and I have about the same shaped head, so it just stays,” she says in the documentary) - there have been several new frames and design tweaks since 1661.

The crown made for Queen Victoria in 1838 serves as a blueprint for today’s headpiece, though its jewels have been periodically upgraded. For centuries, budget constraints and the relative rarity of diamonds meant that the British monarchy hired many of the diamonds with which crowns were adorned - even George IV, the most gem-loving sovereign of them all, wore borrowed diamonds.

Today, the Crown Jewels are adorned with an eye-watering collection of precious stones, and none more so than the state crown.

As the Queen herself remarks, it’s nice and easy to know which way round the Imperial State Crown goes: the big red stone at the front. At the centre of this is the Black Prince’s Ruby, a giant, uneven 170-carat red spinel (spinels weren’t differentiated from rubies until the 18th century) which has adorned the English state crown since at least 1685.

It was probably mined in Afghanistan, where most spinels are found, and was, so the story goes, given to the Black Prince, the son of Edward III, by Don Pedro of Castile and then worn by Henry V on his helmet at Agincourt.

READ: The Jeweller Who Still Dazzles The World

In truth, it isn’t clear whether this stone was even part of the collection before the civil war, but a “pierced” spinel was sold in 1649, so it is possible it was, and made its way back to Charles II in 1660.

Perhaps the most famous diamond in the world, the Koh-i-Noor - which has such a turbulent history that it is thought to bring bad luck to men who wear it - currently sits in the Queen Mother’s crown rather than in the sovereign’s regalia. While the Imperial State Crown contains almost 3,000 diamonds, one out-shines the rest: the Cullinan II diamond, set below the Black Prince’s Ruby, is part of the largest gem-quality diamond ever found.

In South Africa in 1905, a 3,106-carat mega-gem was mined; it was acquired by the government of Transvaal (where it had been found), and two years later presented to Edward VII as a 66th birthday present. He accepted and the diamond was sent to the centre of the diamond trade, Amsterdam, to be cut into nine separate stones. Cullinan I, which Edward VII named the Great Star of Africa, weighs 530 carats, making it the largest flawless diamond in the world.

It now adorns the top of the Sovereign’s Sceptre with Cross, held by the monarch during a coronation. The 317-carat Cullinan II is now on the band of the Imperial State Crown, but the two stones were designed to be detachable so they could be reformed as a spectacular brooch - which the formidable Queen Mary did occasionally wear. The next two largest Cullinan diamonds, III and IV, can also be made into a brooch, which the Queen wears in tonight’s interview.

These are just some elements of the priceless, 140-object Crown Jewels, and the Queen’s astonishing jewellery collection. Some of the more colourful tales that surround the collection are probably legend, but it is nice to have one rumour cleared up. Nobody quite knew where the key elements were hidden during the Second World War; tonight we (and the Queen herself) learn that a biscuit tin in a cellar underneath Windsor Castle was their safe place. There’s something brilliantly British about that.

Britain’s coronation regalia is the only set on the continent that is still used for the full panoply of a medieval coronation service.

When I was a junior curator at the Tower of London in the Nineties, one of the first tasks I was given was to print some new labels for items in the Jewel House. One was especially satisfying to make: “In Use” - the perfect description of our working monarchy, and the jewels that continue to bear their name.

As told to Guy Kelly. Anna Keay is director of the Landmark Trust. Crown Jewels by Anna Keay is published by Thames & Hudson Ltd.