There are few brands that spark such a range of associations as Tiffany & Co. For some, that instantly recognisable robin’s-egg blue conjures up nostalgia for the Return to Tiffany heart-shaped padlock they treasured as a teenager; for others it’s immediately associated with their engagement ring; for a very select few it evokes memories of the Blue Book piece they were flown to New York to select. So any new Tiffany collection is eagerly anticipated - and the latest doesn’t disappoint.

We were given a preview of the Tiffany City Hardwear collection in January, when it was announced that Lady Gaga would serve as the new face of the campaign. An unusual choice, perhaps, for a company that previously eschewed celebrity endorsements and whose most iconic, if unofficial, poster girl was a doe-eyed Audrey Hepburn.

It signalled a new direction for the brand as it attempts to woo younger consumers; but, thanks to Gaga’s pared-back, grown-up styling, without alienating its core clientele.

The City Hardwear collection manages this tricky balance. It’s the swansong of previous design director Francesca Amfitheatrof, having been designed under her leadership before she departed the company in January (she was replaced by former executive director of Coach, Reed Krakoff, who has assumed the role of chief artistic officer, and whose design debut will launch late this year).

Amfitheatrof was the impossibly elegant woman behind the brand’s previous fine jewellery collection, Tiffany T, which launched in 2014, and the driving force behind collaborations with fashion retailers Dover Street Market and Net-a-Porter; all part of her remit to “make Tiffany cool again”.

Where the minimalist, much coveted Tiffany T collection left off in this mission, City Hardwear continues, with gusto. It’s just as easily worn every day, stacked or singularly, styled with jeans and a t-shirt in that effortlessly cool, very New York way. But where T was all about clean lines and minimalist angles, City Hardwear is voluptuous and rounded, yet manages to be tougher at the same time. 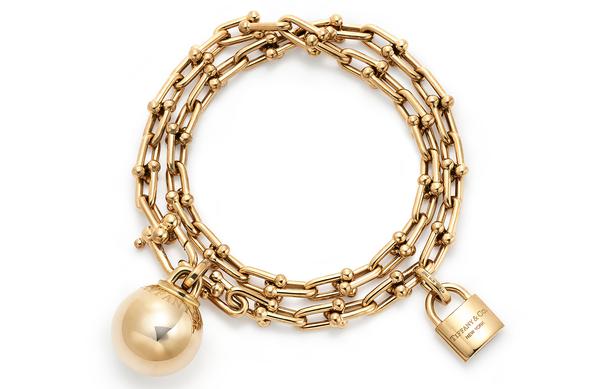 Inspired by a unisex bracelet from 1971, the collection purports to “embody the power and spirit of New York City and the energy of its streets”. This means necklaces and bracelets of chunky rounded links which graduate in size, each one finished with two solid metal balls.

Some of these are hung with a detachable Tiffany & Co padlock and an oversized metal sphere, and can be worn as a long sautoir or wrapped several times around the neck or wrist. The links also appear as earrings - the cool girls will be mismatching a single link in one ear, the chain of three in the other.

Another part of the collection takes the simple metal sphere and bolts it to the end of open cuff bracelets; suspends three of them, small to big, between two chains in a modern spin on the trapeze earring; or fixes them onto plain bands - glossy orbs that beg to be touched. This tactile element is at its peak in chunkier “dangle” rings, in which the balls flip from one side to the other as your finger moves.

Everything is available in sterling silver or 18-ct yellow or rose gold. Despite its industrial, utilitarian connotations, the glossy finish and rounded edges imbue it with a sophisticated feel - hardware for those who probably could, but choose not to fix their leaking sink themselves.

Tiffany aficionados are no doubt in for plenty of surprises with Krakoff now at the helm, but if this latest collection is anything to go by, the future of those blue boxes looks solid.