Lake Taupo glows in the backdrop of this new home. Photo / Ginny Fisher Filled with objects old and new, this lakeside home's pool of character sits high above the water's edge

Upon opening the wide cedar door of the Dickie family’s home, you instinctively look and are lured down the long hallway to a porthole of light.

Sparkling like a gem and framed by an oversized picture window lies the lake beyond, today calm as a millpond in hues of inky teal and petrol blue.

“We never get tired of it,” says owner Charlotte Dickie. “It’s always changing and the view makes the house feel much bigger than it is.”

Clever use of space is one of the hallmarks of the home — not surprising considering Charlotte has a degree in spatial design. 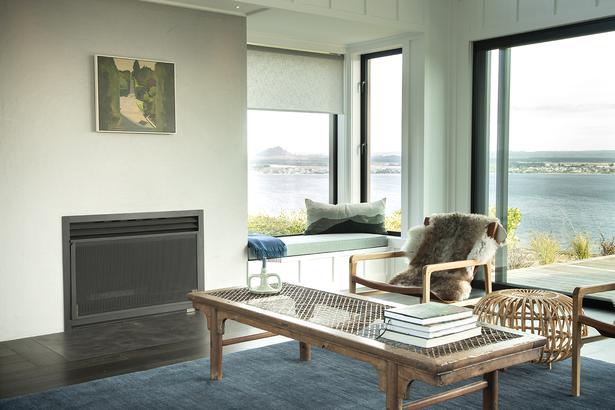 “We wanted smaller but better. We agreed we’d rather pay for quality on a more compact scale.” Charlotte and husband Tom engaged sought-after Taupō architect Fraser Cameron; his brief was to maximise the vistas and make the 306 square-metre footprint, including the garage, work for their family of five.

Fraser came up trumps. “We can see the lake from almost every room in the house,” says Charlotte. Even the bunk room that opens out on to the interior grass courtyard has more than a glimpse of the water through the glass sliders.

Charlotte considers the intimate exterior courtyard as another room, albeit with a grass carpet and a fireplace and dining table — it’s the ultimate entertaining area, as it’s sheltered, private and just steps aways from the kitchen.

The couple had plenty of time to figure out exactly how they wanted the footprint to work, as they had been living on the site in the old dwelling for nearly eight years before building.

Residing in Acacia Bay had never been on the cards until they fell upon this site all those years ago.

“We’d always imagined living in town, so a view was off the cards, but nothing came up. The first time we saw this site it was the most beautiful day and we instantly changed our minds and bought it right on the spot.”

It was a quick gut decision that paid off, even though Charlotte admits it was a bit of a leap, as the old home wasn’t so pretty and was modest in size at 105 square metres.

“We called it the old brick s***house!” she quips.

The original property was spread over two levels, with the garage underneath, so after demolition, the section was raised up and levelled, giving the site an elevated feeling. 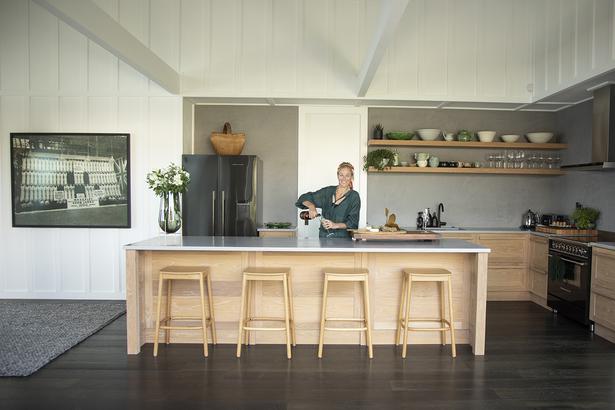 The new cedar-clad house faces southeast and is bathed in sun from the east in the mornings and the west in the afternoons.

While the main focus of the layout is the lake view, the house is anchored by the internal courtyard that has an immaculate lawn, fastidiously manicured by Tom.

“We love the fact the kids can watch a movie lying on the grass by turning the wall TV around in the bunk room,” says Charlotte.

Naturally the interiors and fittings in the home were designed by Charlotte, as her job as owner of Charlie Who — an edgy Taupō fashion and homeware boutique — means she is constantly researching products and trends the world over.

“I see my job as a bit of a scavenger hunt. I’m often on Instagram looking at interiors, fashion and what influencers are wearing.”

Along with a beautifully curated collection of clothing, including New Zealand favourites Mahsa, Bird & Knoll and Commoners, her shop is also packed with chic homeware, ceramics and artworks, as well as coffee table books and imported glassware.

It’s little wonder that her house is punctuated with interesting artworks and objets d’art from her travels, as well as from online sourcing. There are many aspects of the home Charlotte believes work well spatially and aesthetically — for instance the broad, lengthy hallway makes the house feel super-spacious.

She’s also a fan of the architectural, cedar-panelled hallway that conceals a hidden door to the garage and features two custom-made sliding barn doors. “I love the feeling of wood inside, it gives the house a really natural feel.”

Drydens oils were used for the interior in Silver and in Stone for the exterior cedar. Inside the oil finish gives the walls a smoky, whitewashed look, so to match these tones, Charlotte and Tom treated the oak cabinetry in the kitchen and the custom-made shelf in the living room with a white oil.

All the cabinetry and shelving was produced by a local master cabinetmaker, Allan Crompton, who Charlotte says is so clever he’s in demand all over the country.

The batten and board panelling was made by the builder and adds texture to the interior walls while complementing the internal trusses.

To save the need for hanging pendants, Charlotte opted to have all the lights inset to the rafters. “I’d had pendants before and I’m not a fan of the way they draw in the flies. This way the ceiling has a less-cluttered feel.”

The large-scale black and white photograph in the kitchen was a family snap, hidden in a drawer, discovered by Charlotte.

Charlotte had it professionally scanned and blown up and she says it’s a great way of creating a substantial artwork that has personal significance. 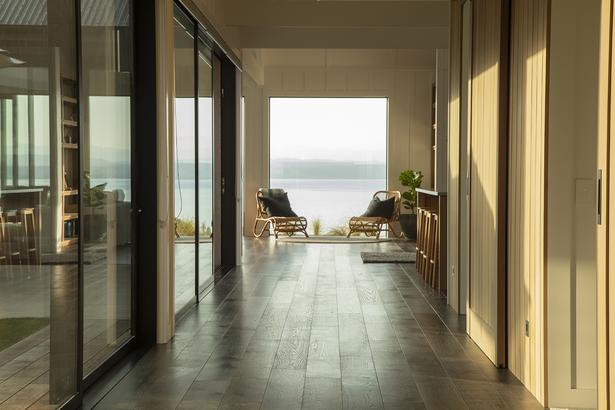 Lake Taupo glows in the backdrop of this new home. Photo / Ginny Fisher

“Tom’s father Marty won show lamb of the year back in 1969. It was the end of an era, as soon after, live shipments to England began.”

Another eye-catching artwork includes the green John Eaden gardenscape that hangs above the fireplace. “It looks like a place I’d like to explore,” says Charlotte. “It reminds me of the gardens of my childhood.”

Then there is the loose, earthy-coloured abstraction of nearby Whakaipo Bay by local painter Claire Anderson; another work she’s fond of is the cubist abstraction in natural tones by Melbourne artist Charlotte Swinden.

In the hallway, a pair of moody photographs by Whanganui-based artist Lynne Hurst are a modern contrast to the wood panelling — Charlotte happens to stock this artist, so fell for these works when they were hanging in the shop.

Georgina Hoby Scutt, a painter from Nelson who goes by the name of Belle Hawk, creates small-scale abstract landscapes that feature throughout the home — her work can also be found in-store.

Objects displayed throughout the home point to Charlotte and Tom’s personal histories.

Charlotte was born in the West Coast and this is where she picked up the Māori mask by artist Tony Manuel; the jade mussel sculptures were carved by her step-father, Jeff Beckworth.

Tom’s hometown of Waverley is home to Waverley Glass Art Studio and it was there Charlotte picked up the blue-green cast-glass mountain and the two woven glass bowls. 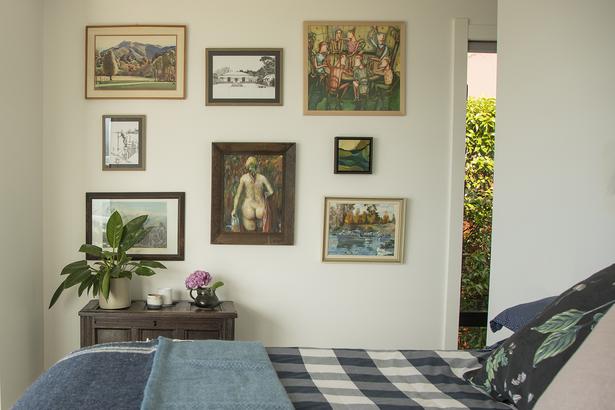 Art in the master bedroom is a mix of contemporary works, including one by Georgina Hoby Scutt. Photo / Ginny Fisher

The balance of vintage and antique pieces with contemporary fittings gives the home warmth and character. “I could never live in a stark home,” says Charlotte, who often visits vintage stores and markets, and enjoys the odd trawl on Trade Me.

The rattan chairs near the window and the seats outdoors were sourced from the yearly Kinloch Market on Labour Day, which Charlotte says is growing larger every year.

The rattan-style coffee table in the living room, crafted from pig’s leather, had a previous life as a bench seat and was gifted to Charlotte by her mother-in-law, while the slingback chairs were sourced locally.

READ: This Melbourne Warehouse Home Is Full of Playful Spaces

The textural sheep pelts dotted throughout the home came from Tom’s family farm in Waverley where they farm Gotland sheep for their soft, silvery-grey, curly wool.

“They are the softest sheep pelts you can buy. We sell out of them in the shop every year, particularly in winter.”

Winter, summer or fall, Taupō appears to be buzzing more than ever, says Charlotte. The couple first moved here 18 years ago and every year visitor numbers grow.

As a result, there has been a flourishing of new eateries and stores. So with little time to spare and customers to tend to, Charlotte rushes out her sweeping cedar door.

“I wish I had more time to spend at home!” she laments. Surely the sign of a much-loved lake house.