Designers In Lockdown: Catching Up With Rachel Mills, Designer & Director Of The Pattern Table Rachel Mills, founder of her own eponymous label & owner of The Pattern Table. Photo / Supplied

For some, the level 4 lockdown period was just as busy, if not busier, than usual. For others, it was a chance to take a step back and have some time to quietly focus, reassess and refresh.

Rachel Mills, designer and director of Auckland-based production house The Pattern Table, fell mostly into the latter category due to the necessarily tactile nature of her business, unable to operate in level 4.

Since purchasing The Pattern Table in July last year, Rachel says the following months were all-consuming as she and her mother (who co-owns the business) grew it from three machinists to eight staff members.

They utilised the last month of forced leave to tweak systems and processes, and make sure everything’s organised for the company’s staff to return to work this week.

It’s also been “a bit luxurious” for Rachel to have some time to put into her own eponymous label again, and figure out how it’s going to function alongside the production house.

READ: How Will Covid-19 Affect The New Zealand Fashion Industry?

Based in Mt Eden, The Pattern Table is a sample and production house that manufactures clothing for New Zealand brands starting from the initial concept, right through to the finished garment.

Before taking it over, Rachel was doing a lot of freelance pattern-making work alongside her Rachel Mills brand. “A lot of clients [were] saying they couldn’t find good machinists, so it meant I could offer them the whole package.”

The company came with highly-skilled machinists already in its employ and, importantly, the machines themselves.

There has been a lot of learning. “Figuring out how to manage people, pricing within production… I think there are a lot of battles within that side of the industry that don’t get seen.”

Finding the machinists themselves is also one of the biggest challenges.

Having spoken to people working during that era, it was a different scene compared with now she says. “Numbers back then were 500 to 1000 per unit. Now we’re dealing with numbers more like 10 to 50 per unit.”

Many machinists moved on to other jobs when they thought there wasn’t a future in that career, or found employment with some of New Zealand’s more well-known brands whose clothing is made locally.

“There are very few people learning how to sew or wanting to get into that side of it,” says Rachel. “Most of the machinists I work with have 20-plus years of experience. It takes a long time to get to the level where I could give them fifty of a garment and trust they’ll be fine, and that’s the standard we need.”

There needs to be some sort of training facility, she thinks, and more funds invested into world-class equipment for the local manufacturing industry to start thriving again.

"We’ve got a lot of local brands that are doing really well, selling on Net-A-Porter and Moda Operandi. That means we’re then put up against other international brands that have a lot more to invest in this type of thing; whereas we’re just a small team of people from New Zealand trying to make it work with old machines and what we’ve got. We do need something to bring us up to a higher level — whether it is investment, time, resources or teaching facilities, to bring more labour, skills and equipment  on board to get to where we need to be.”

Asked whether she thinks this needs to come from a government level, Rachel says that’s a starting point.

“We need something to get ahead — you can only make so much with what you’ve got. If you look at other industries that have done well in terms of exporting, it’s because they have had government assistance. Or things like programmes that have allowed everyone to work together in order to improve on what they do.

The fashion industry hasn’t had that in many years — there’s no local board that oversees it.” 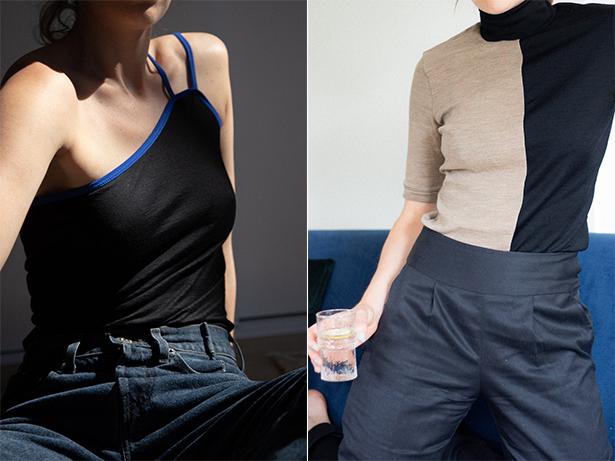 From left: The Jeremy Cami & the split turtleneck, made in Auckland & both available to purchase from Rachelmills.co.nz. Photos / Supplied

She thinks the fashion industry also needs to take responsibility for itself — the creative and the practical need to be more closely intertwined, and those behind brands should work more closely with manufacturers to figure out the best way to make their clothing, and the best way to move forward from Covid-19.

“It’s an interesting time to be part of both the manufacturing and designing.”

As for keeping motivated day-to-day when she was unable to go into her workplace, Rachel aimed to stick to a solid and familiar routine involving waking up at a reasonable hour, set meal times and fitting in some exercise.

Living with her partner Asher has been helpful during this time, she says, as he also runs his own business meaning they motivate each other to get things done.

Rachel’s been enjoying making garments again from home, something that fell by the wayside in recent times as she worked to oversee her new business. These have included masks, which swiftly sold out, and some merino pieces that could be sold as essentials during level 4.

Heading back to the workroom this week, she and her team are making sure their machines are spread out, and no one is sharing tools.

“It will be interesting to see in a few months’ time how sales are affected,” says Rachel. “For now it’s promising that we have a lot of work to get back to.”

She points out that something positive to have come out of this time has been visible brand loyalty, with people supporting their favourite labels and stores online even if their orders weren’t able to be delivered straight away.

“I’m hoping it is a time for change and a time to assess whether the way we’ve been doing things is the way we should keep doing things,” she says. “The ones who are doing well at that are going to come out of this.”

On the home front, Rachel’s been enjoying family time during lockdown and feels lucky to live on the same property as Asher’s sister, her husband and their three young children. “There’s been lots of shared dinners, lots of baking from them, which is really nice,” she says. “The day goes quicker when there’s young kids involved — lots of card games, movie nights, fun things like that. “It’s been quite nice to realise that that stuff’s really important as well.”