The K Rd apartment of Zambesi menswear designer Dayne Johnston is filled with special pieces, each with a tale to tell, writes Johanna Thornton

Authenticity is key to making a house feel like a home. Dayne Johnston’s Karangahape Rd apartment could have been plucked straight from the pages of Architectural Digest, but there’s no style-by-numbers happening here. His art, furniture and eclectic decor has meaning attached, the stories woven together to create a comforting environment that’s a foil for Dayne’s busy role as menswear designer and buyer for Zambesi.

“I love coming home from work and having my own sanctuary to chill out in. It feels like a safe place to be. It’s completely silent and I enjoy the tranquillity,” he says.

When Viva visits Dayne at home, he’s in the middle of Fashion Week madness, with not one but two shows to prepare for. On Thursday night Zambesi presents its autumn/winter 2020 collection to media and industry at Auckland library, and Friday night is a retrospective show open to the public to mark its 40th year in fashion. This milestone celebration will see garments dating back to the brand’s launch in 1979 being showcased on the runway. “Can you imagine doing two shows back to back? It’s going to be nuts,” says Dayne. 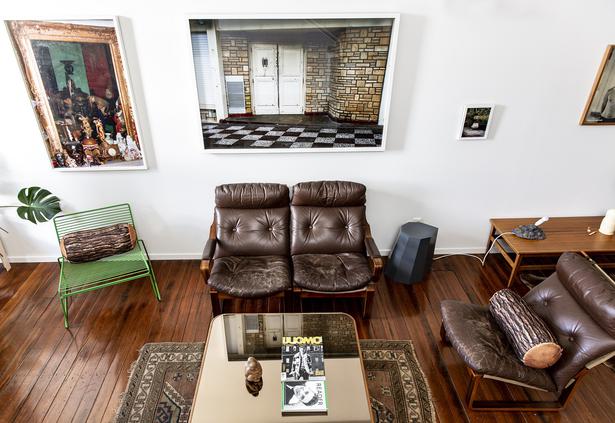 He won’t be spending much time at the apartment this week, but when he is at home he prefers a later start to the morning, taking his French bulldog, Angus, for a walk around K Rd first thing, then drinking coffee and having breakfast at the dining table that looks out over the rooftops towards Upper Queen St. At night he likes to cook for friends. They’ll drink wine and listen to records on his new record player. Vinyl is a new hobby for Dayne. He was inspired after his friend Finn Andrews from The Veils gave him a record from his latest album. It’s been fun scouring the selection at Flying Out just across the road on Pitt St, he says.

His apartment in the historic George Courts building has been home for 15 years. Built in 1924 as a department store, it was retrofitted into apartments in the 90s. Hangovers from its department store past remain, in a good way. An iron staircase leads to wide wooden promenades that wrap around the edges of each floor. These grand spaces are often empty, the eerie quiet in contrast to the bustle of K Rd. 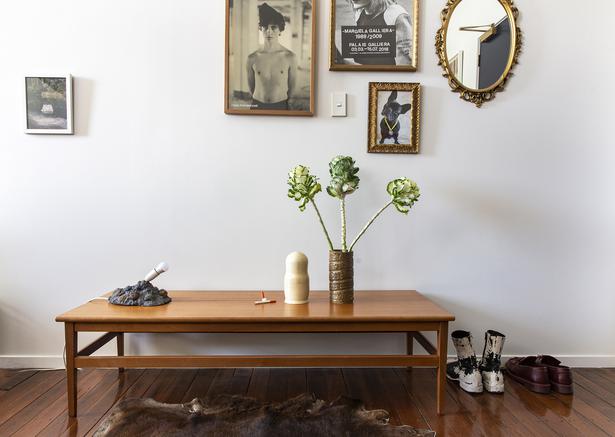 Inside the apartment, the high ceilings are the most striking feature. It took a painter three and half weeks to transform the 4.4m-high, cream-coloured walls into the crisp Resene ‘Black White’ they are today. “It was a mission,” says Dayne, “but it’s lightened it up a lot. It reminds me of a European apartment and the stud height makes it feel larger. The only disadvantage is there’s no outdoor area for Angus.”

The open-plan living, dining and kitchen area is downstairs, with a bathroom just off the kitchen, both in their original 90s state. Upstairs is a mezzanine bedroom accessed by a set of stairs lined with pairs of shoes — a necessity for a fashion designer with a lack of storage space. “I’d love to redo the whole thing,” says Dayne. “I have fantasies about knocking the wall out and having a floating stairwell. But for now, I’m happy.”

Dayne’s role at Zambesi involves a lot of travel, including twice-yearly trips to Men’s Fashion Week in Paris. It’s these trips that have inspired a recent interest in Scandinavian design. He’s been accumulating pieces slowly over time, which explains the space’s cohesion despite its eclectic nature. “I’ve been collecting bits and pieces on my trips overseas. I have an attraction to Danish pieces; I like the simplicity of them. I guess I resonate towards a 70s aesthetic. I don’t like things brand new, I like them worn and eclectic and considered.” 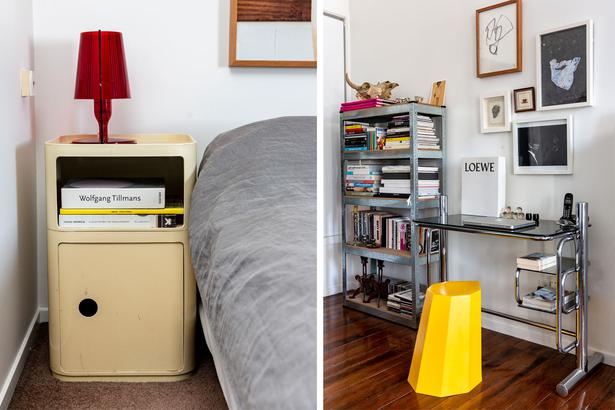 In the living area, a buttery leather couch by Danish firm Mogens Hansen is teamed with a De Sede leather coffee table with a mirrored glass top, picked up from Charlotte Rust’s Babelogue store.

“I love the idea that it goes with the cognac-coloured couch because it’s got the same kind of leather. De Sede was one of those iconic designers from Switzerland who brought out a lot of 70s designs. It’s kind of beaten up but I like that.” It sits atop a vintage Turkish rug, also from Babelogue.

Just off the kitchen, a 1940s Polish medicine cabinet stands aside an Arnold Circus stool by Martino Gamper, and chrome and leather dining chairs from the Cross St Markets surround a mid-century wooden table. “I like the juxtaposition of industrial stuff,” says Dayne, who doesn’t adhere to a strictly vintage-only aesthetic. He found the log-shaped pillows at Kmart for 10 bucks. They work so well with his furniture, you’d swear they were a designer find.

Above the couch are framed photographs by Dayne’s friends Karen Inderbitzen-Waller and Delphine Avril Planqueel. One was taken outside a seaside restaurant in Normandy and another depicts a chaotic mantelpiece scene called Billy’s Mirror. Both feature in their book Smoke & Mirrors and are two of Dayne’s favourite pieces. 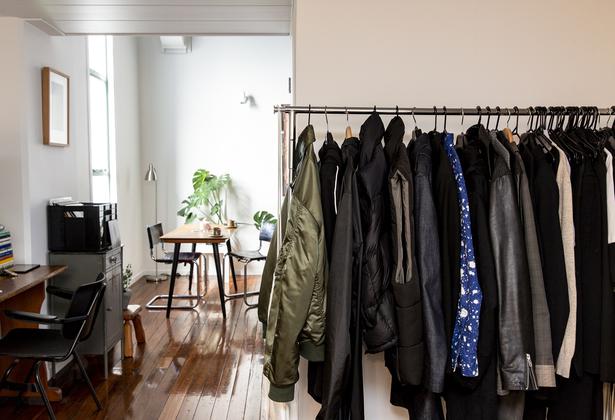 A framed Raf Simons show invitation hangs above an Anglepoise x Margaret Howell lamp gifted to Dayne by Zambesi founders Elisabeth and Neville Findlay for his 40th birthday. Raf’s design aesthetic has had a huge influence, says Dayne, who got the chance to meet him at an after-party for his show in New York. “He’s one of my favourite fashion designers and one that we’ve stocked at Zambesi for 16 years.” The framed invitation was Dayne’s 24th consecutive show, “so it felt like a special moment to get it framed. Raf was blown away by the fact that I’d been to so many shows and that I was from New Zealand.”

Another gallery wall features a handsome shot of Angus next to a Gosha Rubchinskiy poster from a Comme des Garcon exhibition Dayne visited with Karen and Avril. “We got to meet him and he signed the poster,” says Dayne, who used to stock Gosha’s label at Zambesi and is a longtime fan.

The Margiela poster is from a retrospective exhibition in Paris Dayne visited last year, “which is also quite special”. On the table below is a Bad Lamp from Melody Goods’ Cross Street Market stall with its signature bizarre concrete base and haphazardly attached bulb. There’s a ceramic cigarette by Dayne’s friend Denise Porter-Howland of Melbourne-based Eleventeen Ceramics. He also has one of her ceramic lungs — quirky pieces with a sense of irreverence. 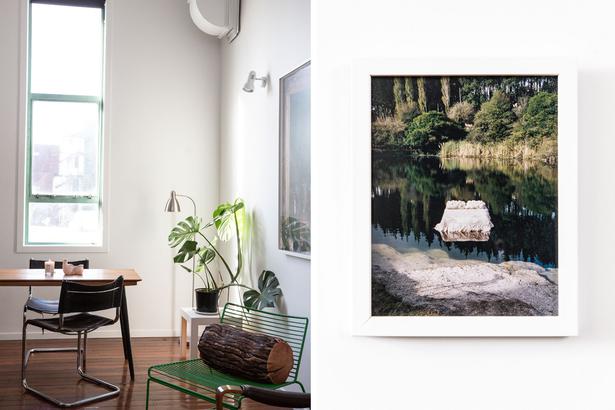 It’s a great pad, but K Rd can get a bit much at times, especially with a dog. “It's crazy sometimes”, says Dayne. Angus has gotten used to being a K Rd dog, dodging the crowds and avoiding broken glass on Sunday mornings. They escape to the west coast beaches or dog parks on the weekend. “He loves getting in the water and having that space to run around in. We’ll go to Meola, Point Erin Park and Grey Lynn. There’s lots of places close by.”

Despite its location, the apartment is still a retreat, says Dayne.

It’s a highly personal space filled with special pieces from friends, meaning it’s a joy to be in. “You can absorb the atmosphere of the city if you want to but when you’re in the apartment you don’t feel like you’re in town. It feels quiet and secluded. I’m happy here.”