In keeping with the ethos of her ethical fashion label, Gosia takes a pared back yet high quality approach to her North London home Meeting Kowtow creative director Gosia Piatek in her Newmarket store is a relaxed, inspired and natural experience, much like her 13-year-old clothing label. She’s just arrived from lunch with Karen Walker — "it was so great to meet her for the first time" — after a hectic morning of back-to-back meetings.

READ: This Melbourne Warehouse Home Is Full Of Playful Spaces

Her working days are busy when she’s in New Zealand, packing in as much as she can before flying back to London where she shares a newly purchased home with her husband Thomas Napper, a film director, and 5-year-old son Laker. 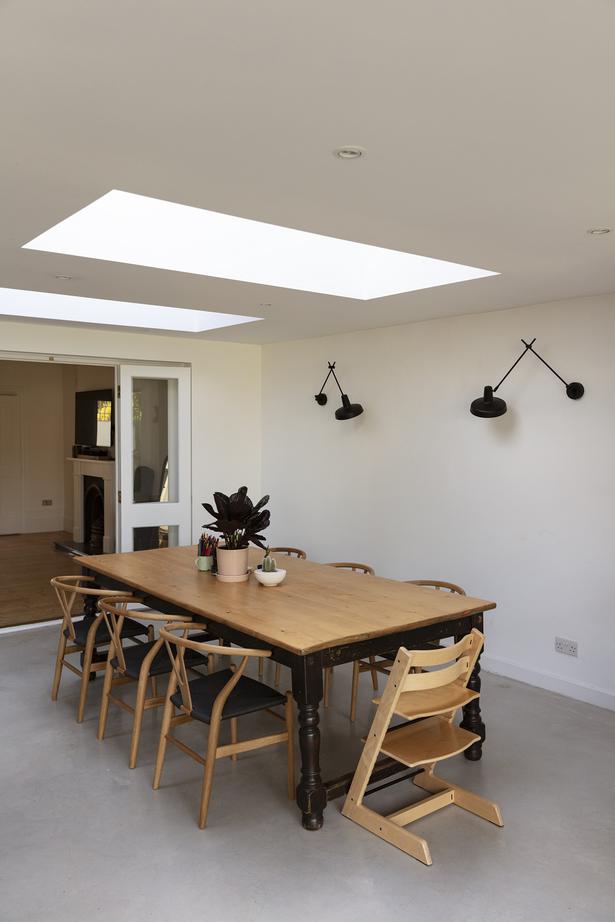 Long before Greta Thunberg’s rallying cry to save the world, came Gosia's passion for seed-to-garment manufacturing that has blossomed into a sustainable fashion powerhouse with 30 staff and 250 stockists.

Her latest conquest has been getting the brand into Galeries Lafayette, the prestigious Parisian department store.

"Thirteen years ago, it wasn’t something you shouted about. People thought we were a bit weird," she says, laughing.

She met Thomas by chance five years ago at a hotel breakfast in Kolkata, India. She was visiting her organic cotton factory; he was shooting a music video. They spent 24 hours together, “fell madly in love” and she became pregnant four months later.

Thus began a five-year journey between London and Wellington, living summer to summer in each city. But with Laker starting school, they chose to make London their permanent home. "[Living in two countries] was quite jarring. It’s not even the jet lag. It’s just the culture change. You get stuck into a groove and then boom you’re off again," she says. 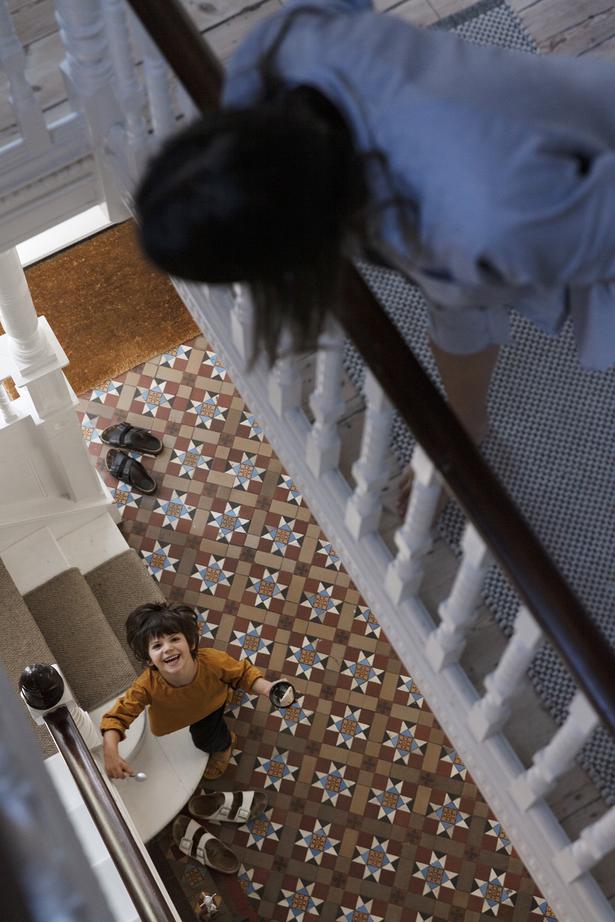 It was a mutual decision to purchase the five-bedroom, three-storey Victorian House in Crouch End. They previously lived nearby in a house Thomas had inherited from his father — an architect and painter — and it was filled with Thomas’ furniture and his father’s art.

"This is a fresh start, a home that we can build together," says Gosia. "That’s why I wanted to move away from his dad’s house. It was full of Thomas' stuff, it was already his country, I was like, 'where is the me in the equation'?"

Living is split over three levels: on the ground floor is the kitchen, living room and a small study; guest accommodation on the second, and the master bedroom and Laker’s bedroom on the top floor. Gosia and Thomas had to reconcile their opposing tastes; Gosia’s strict minimalist aesthetic — with a nod to mid-century modern and Scandinavian style — with Thomas’ preference for more classic, British style. 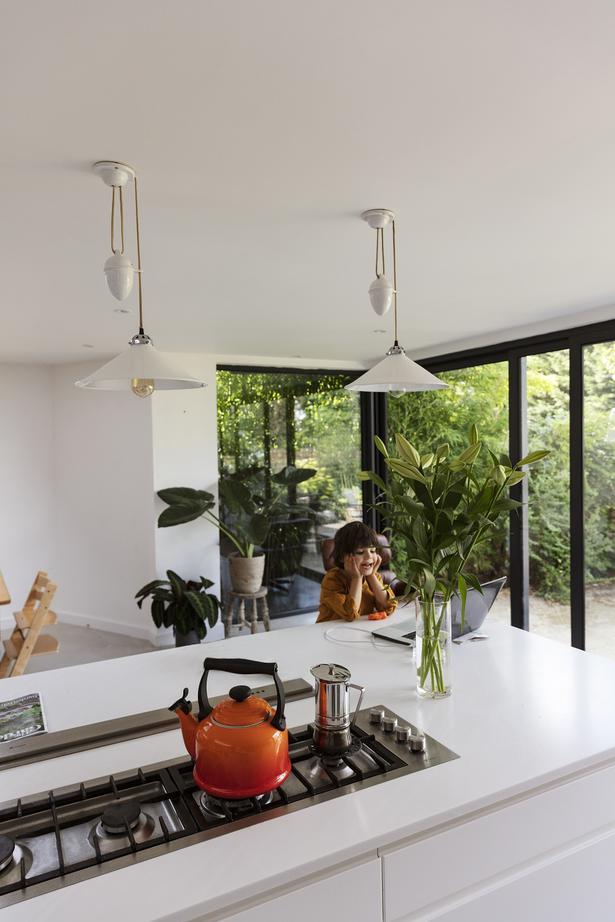 The large kitchen is the heart of the home. Photo / Supplied

Gosia explains that for now she’s managed to keep the house somewhat minimal, relegating Thomas’ things to the study. “I just chuck everything in there!” she says. “He knows I’m too fussy and that his stuff gives me anxiety.”

Gosia was especially drawn to the house because it was much wider than traditional Victorian houses, affording more generous light and, at 220sq m, a lot more room to entertain. With the extra guest accommodation they’ve enjoyed a “steady stream of visitors”.

The home was fully renovated when they bought it. “Because my life has been so busy and quite stressful ... I wanted a home that [was already renovated], so I didn’t have to deal with it. Not everything is my cup of tea. Like I think the kitchen is a bit sterile,” she says. “For my own sanity, it’s perfect.”

Among her favourite pieces are Thomas’ vintage Eames chair — “that ticks my box, minimalist and mid-century” — and the Hans Wegner Wishbone dining chairs with black cord caning. Not all of Thomas’ things she was keen to keep, including a vintage chandelier he kept from their previous home. 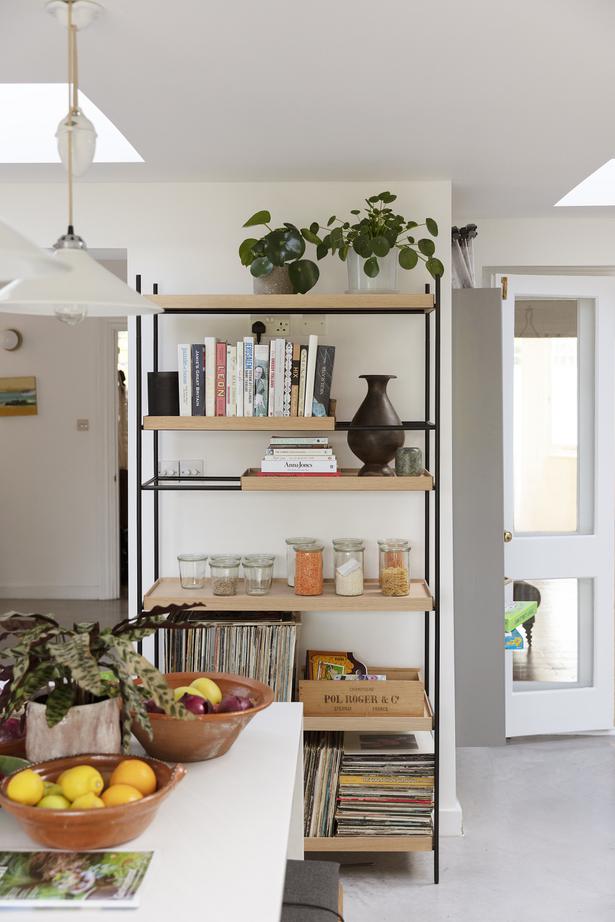 The Cobb Rise and fall pendant lights from Original BTC hang above the kitchen island.

She compromised, giving it a modern twist by hanging it in the corner, rather than the centre, of the study’s ceiling. Next to the dining table, she plans to place a work by photographer and friend Yoan Jolly, her previous graphic designer of 10 years at Kowtow. “It was a house-warming present,” she says of the image of waves crashing on a shoreline that reminds her of New Zealand.

A sworn minimalist, Gosia believes less is more. “I would be happy with one of those Japanese rooms with a sliding door, a low bed, and a tatami mat. If all the building materials around you are of value, natural and beautiful, what else do you need?”

They love to entertain, especially on weekends, inviting an eclectic mix of people. “[Thomas] is a film director so there might be some really famous person mixed in with a teenager who’s like, whoa, tripping out about it,” she laughs. “Because I’m Polish, I like all the food to be shared.” Gosia, a vegetarian, loves to cook whatever is in season. A typical summer party might see a platter of tomatoes and mozzarella, a large cos lettuce salad, some grilled eggplant and big loaves of bread. 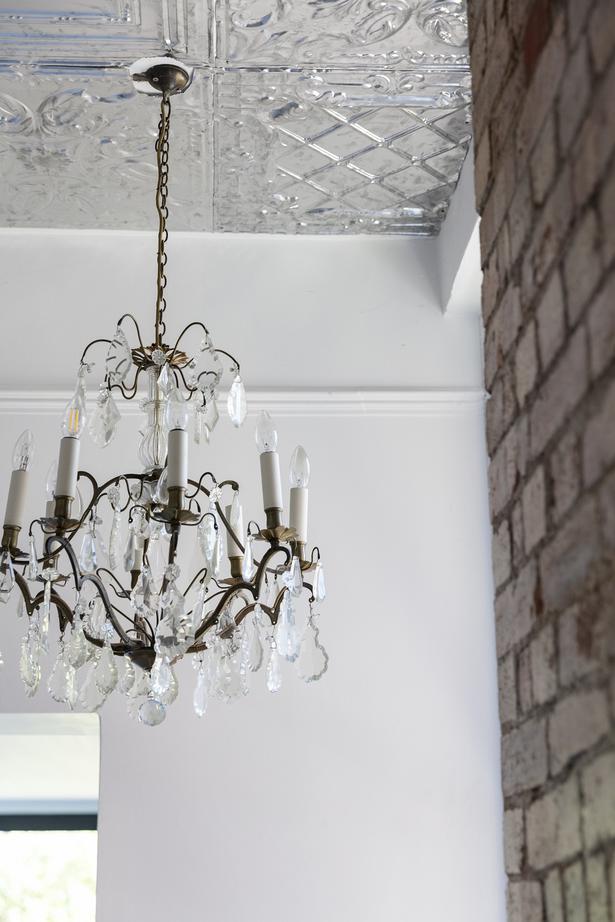 A vintage chandelier hangs in the corner of the study. Photo / Supplied

Gosia and Thomas are in the midst of renovating the garden, using old sleepers to grow vegetables. At the back of the garden is a pathway to a 1ha garden — complete with a plum and apple orchard — that is shared with her neighbours. It was formerly a mechanics’ yard; all the neighbours pitched in to save it and turned into a private garden. “It’s so cool. There’s no road access so [Laker] can go in there and just get lost.”

He attends school near Hampstead Heath where the curriculum is focused around the 17 United Nations Sustainable Development Goals. “It’s super cool, they’ve got heaps of grass and it’s in the forest,” she says. He loves playing with Schleich painted animals, which Gosia buys on Ebay.

For the past couple of years, she has asked guests invited to Laker’s birthday parties not to buy plastic toys as presents. “A book cost £5 and that’s a great gift”, she says. “Plastic toys literally break after one day.”

Last year she opened a Kowtow studio in East London, to which she commutes and which happens to be right next door to fashion and style guru Alexa Chung’s workplace. The garden leads on to one hectare of communal garden. Photo / Supplied

“The downside of London is the commuting. But the upside is all the inspiration you can get. I see [Alexa] walking in every day with her cool, effortless style,” she says. “That’s pretty inspiring.”

Does she miss New Zealand? “Every day. All I dream about is moving back,” she laments. She hopes to move back in a couple of years, but all that depends on Thomas’ flourishing career. He’s currently directing a BBC drama, Baptiste, being shot in Budapest, that allows him to come home for weekends. Certainly, an impossibility if they were living in New Zealand.

Over Christmas they will all spend six weeks in New Zealand. “I’m going to take [Thomas] on a little tiki tour,” she says with a smile, explaining they plan to rent a camper van and drive right up to Cape Reinga. “I’ll get him to fall in love with this country so that [we] come back — that’s the plan.”