At dusk, Mawhiti is privy to a stunning natural display. Photo / Peter Rees In a year where finding creative ways to escape within our borders has become a national preoccupation, a new private holiday home just 45 minutes from central Auckland offers a palette of literal and metaphorical ways for guests to slip the constraints of everyday life.

Up to eight guests can stay in the home’s four spacious bedrooms, each with a luxurious en suite that opens to a small private garden where bathers can enjoy the outdoors as they soak. The bedrooms, voluminous living space and porch look out across the Hauraki Gulf towards Rangitoto.

In summer, large doors allow the breeze and sounds of the native bush and ocean to sweep through the house, while in winter, a massive concrete fireplace anchors the building with a fire to gather around. Thoughtfully chosen artworks offer moments of creative contemplation.

Tucked away on the southwestern coastline of Waiheke, a few minutes’ drive from the Matiatia Wharf, Mawhiti (meaning “escape”) was dreamed up by a pair of arts patrons who wanted to create a place where small family and friend groups could unwind and experience the quintessential beauty of New Zealand in elegantly relaxed accommodation. 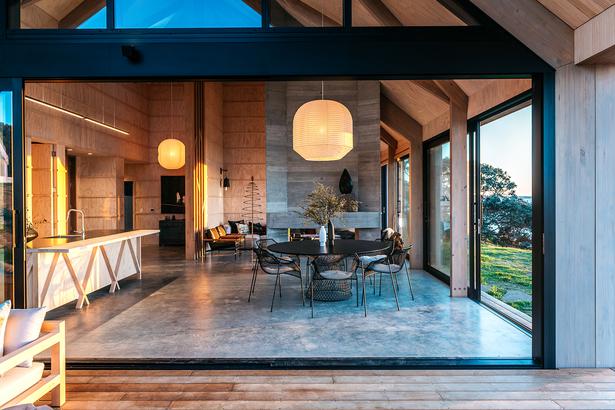 Sliding glass doors open the living spaces up to the expansive deck area, with views across the Hauraki Gulf. Photo / Peter Rees

When the pair — two sisters — first purchased the site, they had fallen in love with the land’s beauty, but were unsure what they would do with it. Paradise, after all, is hard to improve upon. “The site has everything,” says one of the sisters.

“It’s private, rural, it’s got beautiful native plants on it — spectacular ancient pohutukawa. It’s a feast for the eyes, really. Every single day you can sit and watch life go by and it’s always interesting. The bird life is magnificent and the dawn chorus is gorgeous. The property just encapsulated everything for us.”

Their answer arose from a separate project they’d already committed to.

The committee organising the biennial Waiheke Sculpture on the Gulf exhibition — led by Jonathan Rutherfurd Best, co-founder of Waiheke’s Oyster Inn — had been seeking an architectural structure for the 2017 edition of the event, and were intrigued by a pavilion concept posted by architects Nicholas Stevens and Gary Lawson on their studio’s Instagram. 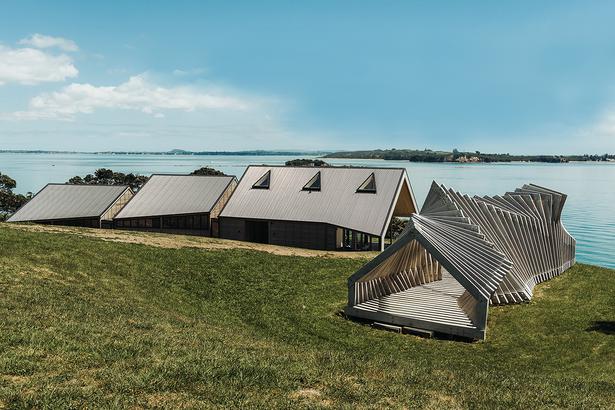 This striking timber pavilion became the inspiration for the form of the guest house. Photo / Peter Rees

Originally intended for the 2012 Venice Biennale, the pavilion — a sinuous timber structure that blends references to the man-made form of the whare with ideas of natural formations like mountain ranges and caves — went unrealised due to funding difficulties.

Separately, the same picture on the Stevens Lawson website caught the eye — and imagination — of one of the sisters, who contacted Nicholas to inquire about bringing it to life.

Nicholas introduced her to Jonathan, who was advocating that the pavilion would be built as the gateway entrance to the Sculpture on the Gulf, a place where visitors could gather, rest and enjoy the landscape.

After the exhibition ended, the pavilion was dismantled and reassembled on the sisters’ property.

There, it became an inspiration for the form of the Mawhiti Waiheke guest house, which the sisters had decided to add to the property. The architecture firm for the project was, naturally, Stevens Lawson. 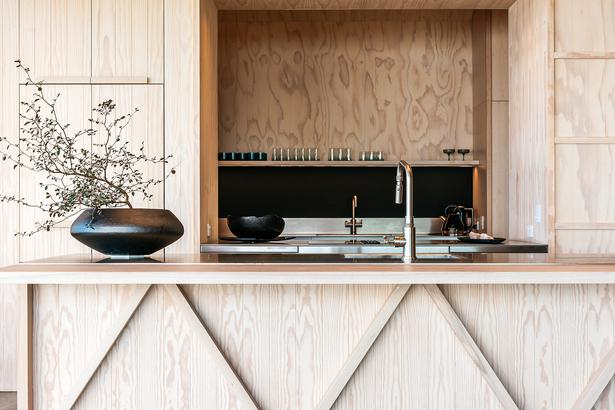 The house has an earthiness in its concrete floors and plywood walls. Photo / Peter Rees

“It was very easy to choose them because we wanted the sculpture to be part of everything and they obviously understood that aesthetic,” remembers one of the sisters. “The other lovely thing was that there were two of them, and there were two of us. We enjoyed that kind of balance, and working with them. The whole house and pavilion site melded together.”

The house, which also drew references from the form of traditional rural buildings and the colours of the landscape, was intended to be a place that celebrates the New Zealand landscape and art created by New Zealanders.

In their brief to the architects, the sisters asked for a strong indoor-outdoor connection and a relaxed vibe.

“We just wanted some little bits of magic within the property but we also wanted it to be understated. We wanted it to settle into the land.”

The design was intended to give overseas visitors an intrinsically “local” experience, and New Zealand visitors a feeling of elevated homeliness. 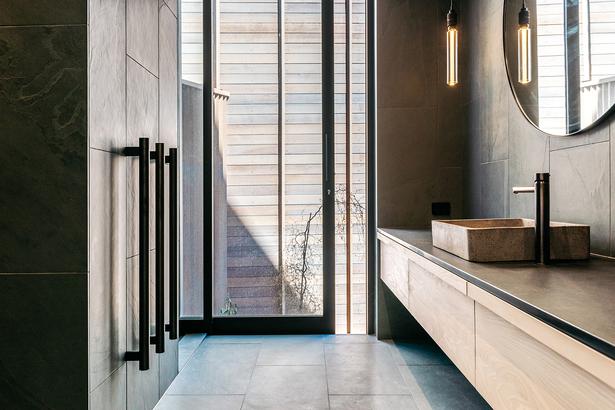 The bathroom is a continuation of the home's simple palette. Photo / Peter Rees

“So much of the accommodation around now doesn’t reference anything particularly New Zealand,” says Nicholas.

“We wanted the house to have an earthiness to it, for it not to be too perfect. It’s contemporary and very well composed, but texturally, the concrete floor is reasonably rough and the walls are plywood. We weren’t aiming for slick perfection, but something more soulful than that.”

A strong element of soulfulness comes from the artworks showcased in the house, several of which are by Waiheke-based Maori visual artist Anton Forde.

A family of carved pou gathers around the house to welcome guests and a hefty tangiwai pounamu teardrop inscribed with a linear Mahutonga/Southern Cross sits on the mantel of the fireplace.

“Anton’s become integral to both of us and the property,” says one of the sisters. “He’s a very special person to us, and added an extra dimension to the place.” At Anton’s suggestion, a Ngati Paoa kaumatua conducted a blessing on the house, which was attended by many of the builders and tradesmen who built it.

Facilitating connection is what the work of art is meant to do, Anton reflects.

“My art is about connection. I don’t think there’s any art that’s not communicating and telling a story. And that’s what Mawhiti does, it tells a story. That’s why I really liked it. The owners and the architects, the builders, the painters, right up to the guys doing the driveways, they all worked with the whenua/land rather than against it. That sense of community in a beautiful spot was quite incredible. When I talked with the builders and painters [at the blessing], I think everyone felt very proud.”

Other artworks in the home include a painting called The Dawn Chorus, by Alan Ibell, which reminds the sisters of their youthful expeditions tramping with their father, an image from the Case Studies series by photographer Mark Smith and botanical enthusiast Felicity Jones, which explores the Wardian Cases of native plants that were sent to Kew Gardens during the 1800s, and a print titled Ranginui, by Sofia Minson.

“It’s a portrait of a Maori chief, very monochromatic, with such a wise and serene counsel. It looks out to sea, and he has a lovely presence within the place.” 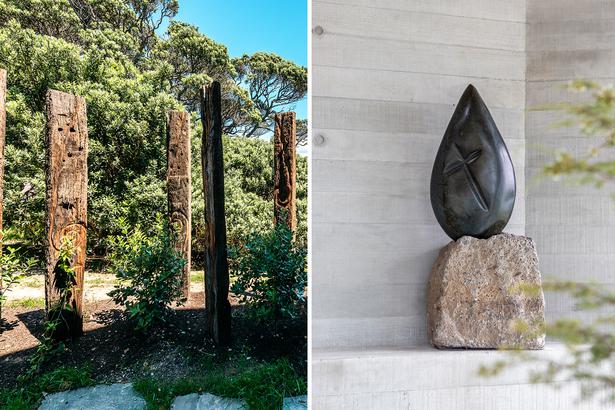 The pavilion that originally inspired the design of the house is also an artwork in its own right, say the owners.

“It’s got fabulous acoustics, it’s beautiful for taking photos in and it’s a real pleasure to lie there and look up at the beams. The house is enclosed but the sculpture is open to the environment, so it adds an extra dimension. Artists and sculptors have lots of time to do their work, but I don’t think architects have a lot of opportunities to do something to a brief out of their imagination without a client. That’s why it first appealed.”

That spirit of generosity, of creating opportunities for others to do something that feeds their creative spirit, underlies the entire project.

“We feel this is a beautiful property and we’re just the custodians of the land,” says one of the sisters. “What we really want to do is share it.”

Accessible only by helicopter, Minaret Station is shrouded by towering peaks and a soothing silence

Waiheke's Three Seven Two Highlights The Might Of Great Cuisine

Jesse Mulligan discovers the lure of this local haunt