The Ford Residences is named after its original incarnation as the car manufacturer’s base. Photo / Babiche Martens If moving house is stressful, downsizing can be panic-inducing. That was certainly the case when an advertising executive transitioned from her Westmere home to an apartment in Parnell.

“I found it totally distressing,” says Karla Fisher, a lead business partner at DDB advertising agency. “I got rid of junk and mess but not half a home like I should have. So I arrived in here with far too much stuff, and a storage unit I’ve only just managed to clear.”

Naturally change-averse, her move was an emotional one. But today, looking around the first-floor apartment she shares with 12-year-old daughter Zali, the only hint that not all is zen comes from Willow, one of two British Blue kittens, miffed she’s not getting a pat.

The apartment, serene and artfully decorated, oozes understated luxury, from the American oak floors and nearly-soundproof sliding doors to the marble finishing in the kitchen and bathroom, to the George Nelson pendant Karla turned into a floor lamp. After much gradual paring back, Karla and Zali have grown to adore living here. 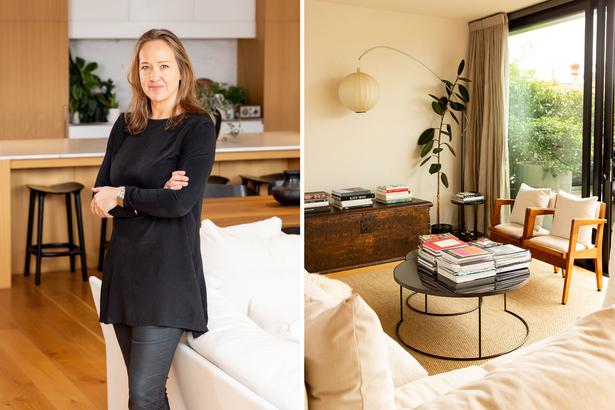 “I affectionately call it my hutch, and I love the practicalities of living in a hutch,” says Karla. “You can imagine how lovely it is to open the patio doors up and lounge around. I might be sitting here on the sofa and Zali’s out there or vice versa. The cats are having a roam, and you’re never far from what you’re doing in the kitchen. It’s very secure and easy.”

Karla’s former Westmere home was a new build, designed by architect Andrew Patterson 10 years ago. So when she discovered his firm, Pattersons, was working on the York Street Studios development (now called the Ford Residences after its original incarnation as the car manufacturer’s base) she went all in and bought off the plans.

The architects worked to retain the character of the original buildings, inserting a new structure within the body of one of the factories, and opening up the roof to form a shared entry and open courtyard.

“Holding up a 100-year-old, double-brick structure while we built within it did have its challenges,” explains Pattersons director Andrew Mitchell, who was closely involved in the design. 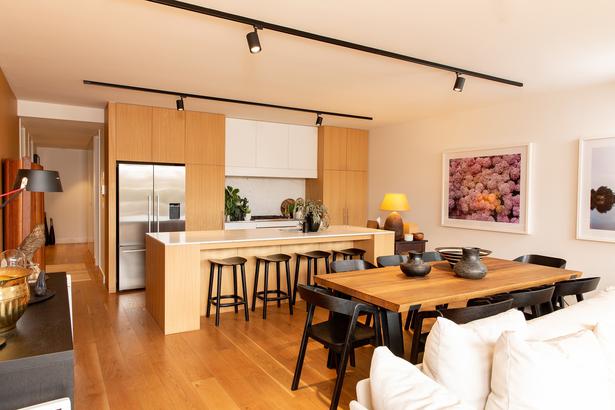 Its striking black exterior was inspired by none other than the compact Ford Model T, with shiny cladding, tailored lines and aluminium cooling fins, alongside a natural interior palette.

“We explored the relationship between new and old,” he says. “Exposing the original brick fabric of the original building while ensuring all new work was complementary and contemporary.”

Many of the original bricks were used, including the rear wall on Karla’s patio, a characterful buffer against the elements.

Karla worked directly with Pattersons to make a few modifications, extending the kitchen bench and tucking the toilet and shower behind a recessed wall in the bathroom for additional privacy.

“We entertain a lot,” she says, meaning the black Simon James barstools she bought when she moved in almost three years ago get a lot of use. So too, the long ECC dining table that has also hosted body corporate meetings. 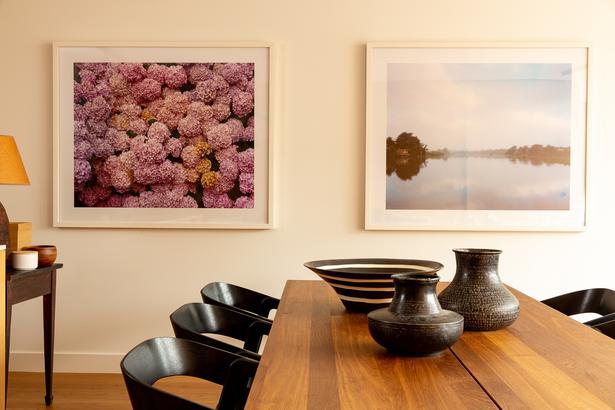 There are 11 apartments in the block, and Karla says she’s come to know everyone. “It’s very neighbourly and we check in on one another. I just love that. I had someone pop in yesterday and ask to borrow a phone charger.”

A few of Karla’s most treasured pieces survived the downsizing purge and complement the earthy space: including an off-white Simon James corner suite that kittens Willow and Sage love snuggling on and a vintage Spanish coffer that now props up coffee table books.

The sheer linen curtains at Karla’s Westmere home didn’t just hold aesthetic appeal worth retaining; they were being hung when she went into labour with Zali. More were installed in Parnell in the living and bedrooms (where they’re backed), after being procured with the help of interior decorator Jen Pack, along with large sisal rugs from Artisan, Mt Eden.

Elsewhere, creative friends have added personality. Photographer Derek Henderson, whom Karla met while working in her former job as communications manager at Country Road, shot the large-scale photographs on the wall: a multitude of blooming pink hydrangeas and a reflective image of his mother’s hometown of Mercer, giving the room a subtle splash of colour. Visitors are met by a striking image of orchids by her artist friend Nikki Willis.

Karla’s keen eye for objet d’art is evident throughout. On the table and cabinet sit ethnic and metallic pieces. A gold eagle, pressed metal urns and brass bowl were picked up during visits to Parnell Rd’s Antiques from Europe.

Woven baskets and a vintage screen also soften the space. 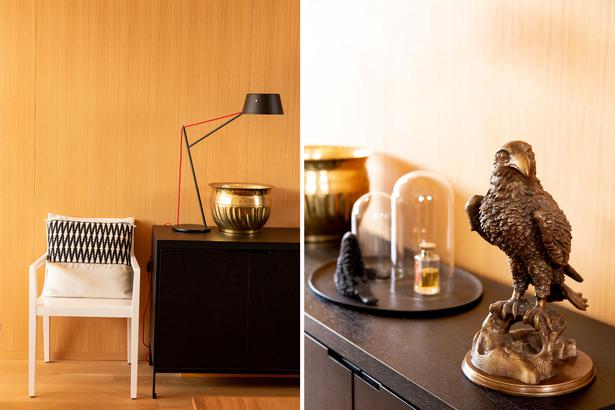 A gold eagle and metal pieces were picked up during visits to Parnell Rd’s Antiques from Europe. Photo / Babiche Martens

“I like a mix of old and new, that curio approach where you find odds and sods that you fit together,” she says. “I tend to buy pieces I like and find a place for them rather than taking a more calculated approach. I like black so there are black accents everywhere. I was thrilled when I saw the design concept: black with tonal — that works for me.”

Outside, Karla worked with landscaper Aaron Bell-Booth to create what is essentially an extension of the living room — when the doors are open to the patio the apartment’s 160sq m footprint feels even more spacious.

Her brief was to establish a low-maintenance garden that looked full and dimensional, resulting in fragrant gardenias, titoki and citrus in huge pots, offset by succulents. These frame a neutral lounge suite from Dawsons that Karla put in to give the space more room to relax in than the previous chair and tables allowed. Her “Jack the Ripper-esque” view of the Edwardian Dilworth Terraces is one she thoroughly enjoys, but Aaron created a metal vine screen to give more privacy.

“It doesn’t matter which way the wind is blowing,” says Karla. “Even when horrific stormy weather is coming in it doesn’t get me, I’m in a little cocoon. Although when the wind blows a certain direction you can hear the ports.” 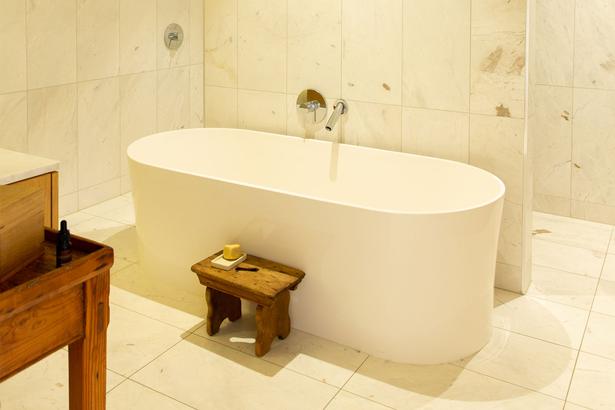 Cabinetmaker Teia Williams was enlisted to beef up the storage space in the hallway cupboard laundry and to add a bookshelf in the third bedroom, which she’s converted into a cosy TV room, complete with a pull-out sofa bed for overnight guests. Naturally Karla has incorporated her love for graphics to the interior, with artwork by Richard Killeen and John Drawbridge and a vase by Susannah Bridges — unfortunately one of the kittens knocked its sister from its perch and it broke.

Karla admits she still misses having a pool and large garden — “mostly to admire though, rather than use” — but the apartment lifestyle has grown on her. She and Zali have an easy drive to work and school, and there’s plenty to do within walking distance on the weekends. La Cigale is an almost weekly visit, although they tend to go on a Sunday when it’s not quite as busy as on Saturdays.

“I’ll often wander up to 46 & York to meet friends for drinks; Woodpecker Hill is one of my favourite restaurants as is NSP [Non Solo Pizza].”

She and Zali belong to Next Gen Health Club where she admits they prefer to use the pool and watch the tennis than work out, or they’ll head into Britomart.

“There’s a lovely patisserie [Vaniye] nearby, and I can’t wait for the new [Westfield] mall to fully open up in Newmarket. I love a one-stop-shop. There’s so much to poke your nose into around here.”