Down to earth with a touch of Eastern glamour makes this Waiheke Island home the perfect respite from modern life. Dan Ahwa takes in the Zen vibes at the magical Lantern House

It’s like walking through the backstage entrance of an elegant club. Hushed glow and brimming anticipation usher my descent down the stairs from the nearby carport onto a narrow lit stone path, leading towards the sleek hallway. Here at the Lantern House, a sophisticated jewel of a home perched on a steep slope, 90m above Onetangi Beach, it’s more of a peaceful refuge than a gilded nightclub though.

Guided by natural light into the main living area, my tired city eyes adjust and take in the main event. Straight ahead is a shimmering scene, framed by native green bush dipping into a graceful V-formation. “Our friends call it the cleavage,” laugh the home’s owners, Jonathan Rutherfurd Best and Andrew Glenn.

The stylish pair motion for me to take a seat at their round antique dining table for coffee and a slice of Jonathan’s apple cake baked earlier for a family gathering. In between charming conversation and the moreish cake, my eyes keep wandering out towards the rapturous view. 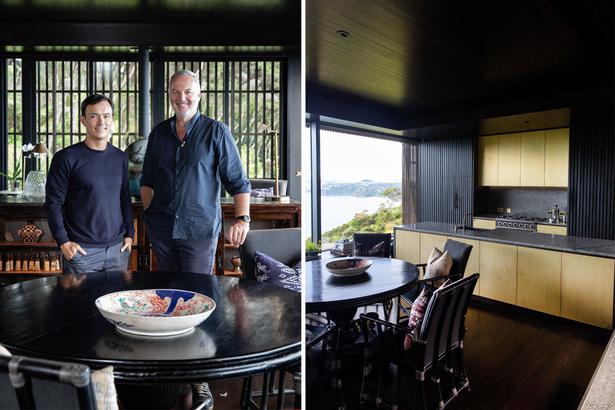 “We had about 20 people over for a meal, and even though we have areas with plenty of seating, everyone is always drawn to this window seat and the view,” says Jonathan.

I don’t blame them. The view is, I imagine, majestic every hour of the day. Purposefully unobstructed by a deck and railings, all its angles are cleverly framed by a dark, natural palette of dramatic Japanese black walls and grey marble floors. Like the inside of a camera lens, the home enhances the beauty of the outdoors into full focus.

“All the drama is outside during the day,” Jonathan explains, “you get to see so much bird life here, it’s amazing. So many tui, piwakawaka, kereru — even hawks pass through hunting. Out in the water you’ll see orcas, whales and dolphins. But at night, the drama comes back to the house — there’s a jewel-box feel, and the darkness emphasises the way we’ve been able to control the lighting to create a mood.” 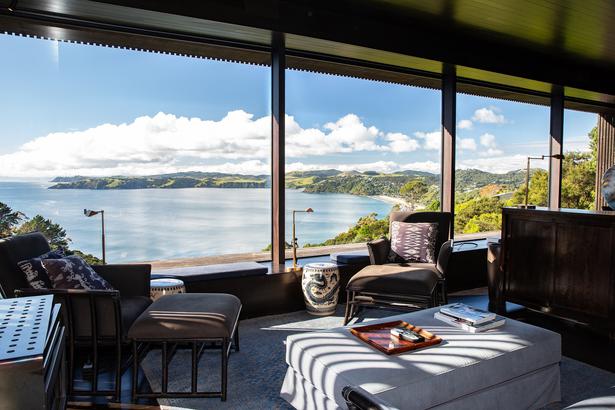 The couple, who sold their popular Waiheke restaurant and hotel The Oyster Inn in December 2017, are finally enjoying the fruits of their labour — the Lantern House is a sophisticated retreat that feels completely connected to its natural environment.

“Building a house is like a full-time job,” says Andrew, “so we feel lucky that it’s complete and we can really enjoy it, especially in the summer months, which is what we originally came to the island for — the beautiful beaches and nature.”

After living and working in London for several years — Andrew as a luxury brand communications director and Jonathan the founder and director of an events production company — it didn’t take long for them to find land when they arrived in New Zealand in 2011. Although both are well equipped to create a home that was comfortable and unique, they collaborated with award-winning architectural duo Lance and Nicky Herbst of Herbst Architects to create their dream Waihekean sanctuary, the couples becoming close friends in the process. 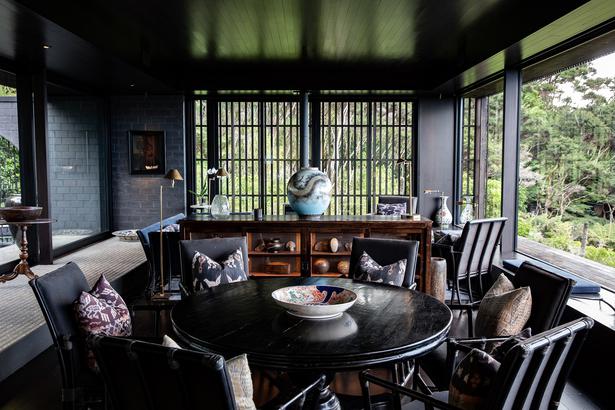 The main room consists of a living and dining area. Photo / Babiche Martens

“We called Lance straight after that initial trip and he came out to see the land,” Jonathan recalls, “and while initially overgrown with bush, he really saw the potential and how he could frame the views beautifully.”

The criteria were simple, to create a dream home in this slice of paradise that was malleable enough not only for them, but for guests to enjoy. The intention was to rent it out as luxury holiday accommodation when Andrew and Jonathan travelled to their other home in the French Alps. “We wanted all three bedrooms to have chic ensuite bathrooms for that reason,” says Andrew.

Consisting of a lower level accommodating the permanently used portion of the house, and an upper level for guest accommodation, the house cleverly allows space for communal gatherings and private time. “One of the great things about Lance and Nicky is their incredible sense of proportion,” says Jonathan.

“Nothing is too big. Nothing is too small. It’s a perfectly sized house for two people or 30 people,” Andrew agrees. “They won’t compromise on things and are very set on proportion. We really respect their fastidiousness to their principles.” A peek of the moon window by the pool. Photo / Babiche Martens

Practical and superficial design elements are at play with the minimalist surfaces — concealment runs throughout the home, from its integrated kitchen and laundry to the infinity-view sun terrace. Less is more, and not much has changed from those initial meetings with the Herbsts, where both couples shared their mutual affinity for Eastern design principles.

READ: Inside An Orakei Home With An Enviable Outdoor Space

“I did my degree in art history, and when you look back at Japanese pavilions, you get this beautiful wooden quality. We were in Japan not too long before we came back to New Zealand, and that really stuck in my mind. Particularly things like the battening, and the moon window that Andrew and Lance collaborated on, which while decorative, also serves as a pool fence. In a way Lance introduced those elements because Andrew is half Chinese, but we also talked a lot about our inspirations, travels and experiences, and a lot of it was naturally drawn from those Eastern influences.” 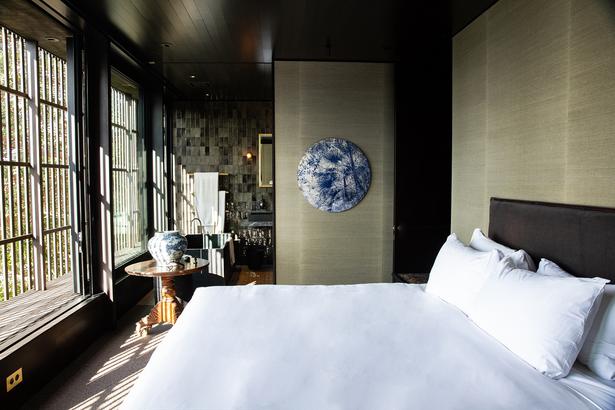 The impressive main room consists of a living and dining area, state-of-the-art kitchen, and floor-to-ceiling sliding doors that open up into a courtyard with a large outdoor fireplace and barbecue area. It’s an entertainer’s paradise, and the couple regularly enjoy playing hosts.

“The one thing we didn’t want was to have a separate scullery where you’re hidden from friends and guests,” says Andrew.

Adding to the seamless glamour, a sweeping raised platform the width of the hallway runs through the main room like a “catwalk”. It’s mirrored by a lowered ceiling, creating an intimate and “cosy effect”, a signature design element of the Herbsts. “It’s also integral to the engineering of the house, because the house cantilevers. There’s a whole steel frame support underneath it.” For its three bedrooms, batten screens cocoon the exterior, creating glowing shadows on interior grass-paper walls, transporting you to an idyllic Japanese teahouse or Bhutanese monastery. The effect is simple and calming.

“We love the work of architect Kerry Hill, who has an Eastern sensibility with his design approach in some of the hotels we’ve loved and stayed at — a lot of those are battened too,” says Andrew. Those travel inspirations extend to the master suite’s super king-sized bed, the brass details, tapware and the deep-soaking Japanese-style bathtub, looking out into native bush.

“We wanted to have a very comfortable and luxurious bathroom,” says Andrew. “Things we loved about travelling were staying in great hotels with good water pressure, generous beds and heated floors.

Details that are so nice to have when you’re on holiday, but why not have them at home? Those elements of holiday living are what we wanted to incorporate into our everyday lives.” 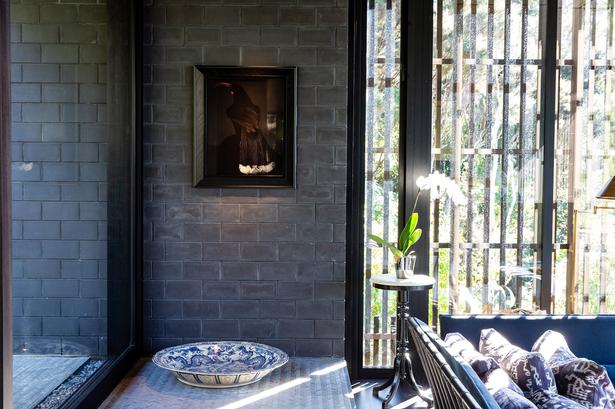 Meditative moments are also captured by the couple’s remarkable collection of New Zealand art. A poignant photograph of a taxidermy huia by Fiona Pardington in the main room prompts spiritual reflection, and the woven works of Ruth Castle add an organic touch against the home’s sexy sheen.

“The house dictated what artworks felt right in the spaces without feeling too intellectual,” says Jonathan. “Art has got to make you think, and I wanted pieces that could enhance that feeling of being at peace.”

That calmness extends past the marble tiles and out into the native landscape, where Jonathan is able to exercise his keen green fingers. Much like its other inspiration, Frank Lloyd Wright’s iconic Fallingwater home in Pennsylvania, the house sits cantilevered and thrust into nature. 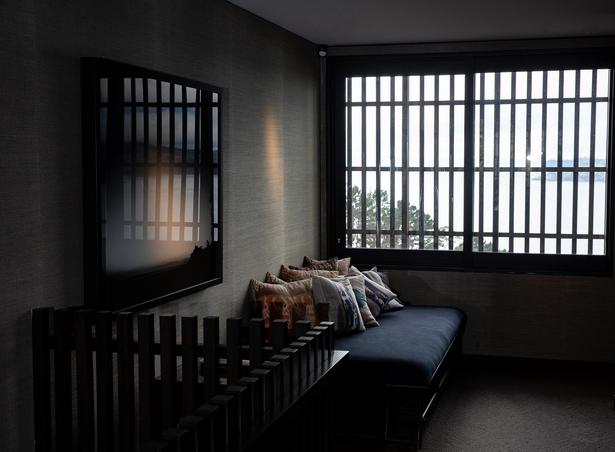 “Everything here is native, apart from the three Fijian hibiscus in the courtyard pots,” says Jonathan, but they still belong to the Pacific. “There’s cabbage trees and a whole lot of different flaxes. And down where we had to do a lot of excavation, we replanted it with kanuka, pohutukawa, ponga and kowhai. I plan on adding some exotics this year, including a black lily called Queen of the Night, and we’re looking at putting in a vegetable garden.”

Balancing the line between its glamorous Eastern flourishes and a down-to-earth sensibility befitting its native surroundings, Andrew and Jonathan have distilled their worldly experiences into this Zen retreat, away from the busy flurry of modern life. “That was really important to us,” says Jonathan. “We didn’t want the house to feel precious — we wanted it to be calming and restful. Life is too hectic, and this home is the perfect antidote for that.”

• For further information or to stay at the Lantern House visit Lanternhouse.co.nz