Canggu’s under-the-radar boho charm has somehow managed to avoid the perils of overdevelopment that has plagued other parts of Bali. Go there now, before it’s too late

When I started frequenting Bali in the late 90s, the Seminyak area was a relatively sleepy village of rice fields, with shops and restaurants clustered along two main roads: Jalan Raya Seminyak and Jalan Laksmana.

In 2000 Ku de Ta — a restaurant beach club wedged between the Oberoi hotel and La Luciola restaurant — opened with a global bang, creating a seismic shift in Bali tourism and put Seminyak firmly on the map.

READ: Discover One Of Indonesia's Most Exclusive & Remote Resorts

Fast-forward 20 years and Seminyak — expanded to include the posh enclaves of Oberoi and Petitenget — is now largely a concrete jungle, the rewards (or punishment) of overdevelopment with five star hotels, villas and restaurants packing every inch of land available.

Canggu, Seminyak’s neighbour to the northwest, has also developed but in a much more bohemian, low-rise kind of way. You still have beautiful rice fields; clusters of charming villages have formed along tributary roads leading to Canggu’s four main beaches: Batu Belig, Berawa, Batu Bolong and Echo Beach. 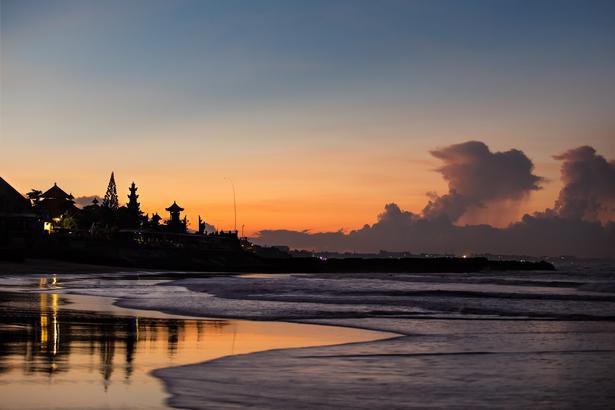 The rate of development has been steady, but Canggu’s hipster, surfer vibe — complete with healthy eateries, yoga retreats and gorgeous PYTs (pretty young things) — has survived. And restaurant prices are still a fraction of Seminyak’s.

At least for now.

“Each place [in Bali] has a life cycle of 10 years. It started with Tuban in the 70s; Kuta in the 80s; Legian 90s, Seminyak 2000s, so it seems to be a 10-year cycle that keeps on moving. And now this is 2020 and it’s Canggu. So in 2030 — God forbid what we will look like! — it’ll be Tabanan,” says celebrated chef Will Meyrick, referring to the coastal town 30 minutes by car beyond Canggu to the northeast. “The [development] will just keep on morphing until it goes all the way around the island.”

Meyrick has lived in Bali for almost 18 years. You may know his name from Jimmy Liks, a Sydney restaurant that pioneered the idea of “modern Asian”. Meyrick literally put Bali (or Seminyak at the very least) on the culinary map with Sarong and Mamasan — two perennially popular haunts that have become institutions in their own right.

Meyrick has a point; the south coast of Bali has witnessed an explosion of development over the past few decades.

Following the establishment of the Kuta and Sanur resort areas in the 1970s and 80s — beaches closest to the airport at the southernmost tip of Bali’s rhombus shape — development has moved east and west up the coasts, particularly to the northwest, developing chronologically and geographically beyond Kuta to Legian, then Seminyak, and now Canggu.

Canggu started with a slow burn, in many ways a rejection of what Seminyak was becoming; bohemian rather than glam; low-fi instead of high-flying design. Initially tourists were mainly surfers, who came for the excellent surf break that runs from Batu Belig up to Pererenan beyond Echo Beach. If Seminyak is urban Sydney, Canggu is chilled-out Byron Bay.

To date Canggu has largely managed to keep the corn-row plaited, Bintang singlet-wearing bogans who have plagued Kuta and now Seminyak at bay. Streets are filled with stylish but low-key eateries, many of them health and wellness-oriented as are the countless yoga and Pilates studios. Canggu is great for chilling out, eating well — and it won’t break the bank.

Billy Ho is Meyrick’s first restaurant venture in Canggu, a modern “izakaya Japanese” restaurant on Batu Bolong: a strip of hotels, shops and restaurants that is currently Canggu’s main artery (and five years ago was just a series of rice fields). Canggu was a logical progression for Meyrick in his expansion across Bali; his first foray beyond Seminyak was opening Hujan Locale, serving modern Southeast Asian and Balinese cuisine, in the mountain town of Ubud.

“I could see at Mamasan that Japanese was actually what a lot of people were wanting,” he says.

Batu Bolong’s now-explosive growth might have been triggered with the opening of The Slow in 2016. The brainchild of George Gorrow, visionary founder of Ksubi Jeans, and his wife, model and ceramicist Cisco Tschurtschenthaler — The Slow is an achingly hip but supremely chic hotel that set a new standard for sophistication in Canggu. Before The Slow, Canggu was largely over-run with dragon fruit smoothies served from roadside shacks, “activated” chia bowls gobbled up by backpacking vegans, and oily nasi goreng served in beachside “warungs”. 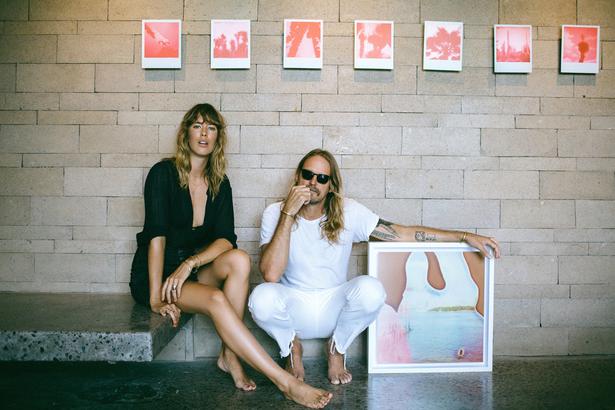 With the opening of The Slow and its award-winning restaurant Eat & Drink, Canggu suddenly grew up with a new level of sophistication.

“Everything is moving here now. Canggu is such a destination,” says Tschurtschenthaler, who made Bali her permanent home in 2016 after moving with Gorrow from New York and before that Sydney. “We go away for three months, and we come back and so much stuff has happened. It’s crazy how developed it’s become.”

Despite the constant change, Tschurtschenthaler feels blessed. “Bali is a pretty amazing place to live. It ticks all the boxes. Every day I wake up and even though it’s crazy we have to go with the change. Our mantra is change is good.”

“Canggu has changed a lot during the last few years but has still maintained the same vibe that no other area in Bali has. While there are high-end hotels moving into the neighbourhood, it is still possible to maintain this unique spirit,” says restaurateur Mauro Piludu, who operates Bottega Italiana, a burgeoning empire of homemade Italian pasta restaurants with two outlets in Canggu and two in Seminyak.

“And this great mix of all these different types of people co-existing in a relatively intimate beachside enclave creates the perfect blend of good vibes and fun. You can feel the energy and attitude in Canggu is different.” 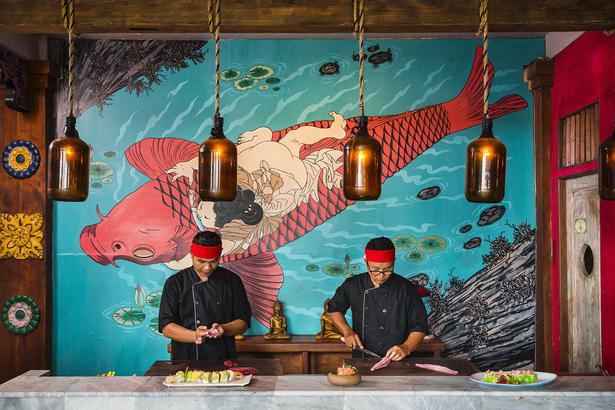 Despite Canggu’s meteoric rise in the past decade, development has largely been in keeping with its bohemian vibe. Inevitably, traffic has increased; more hotels and villas are being built. At the same time there’s a foundation of environmental consciousness being adopted by businesses, including banning straws and plastic bags. The Slow has a zero waste policy, with no plastic used in the restaurant and rooms.

At the bar, cups are made from recycled beer bottles with the stems cut off; straws are made of glass. “It’s the least I can do,” says Tschurtschenthaler. “Bali has been great to us and if we can give back a little, it’s to produce as little waste as possible.”

High-end hotels are definitely moving into Canggu. In 2018 Como Uma Canggu opened, bringing chic five-star luxury to Echo Beach; to the east of the Como, a five-star Regent property will open next year. And of course Canggu’s original luxury resort — the intimately exotic Hotel Tugu — has been hosting jet-set bohemians for almost two decades.

Will Meyrick believes people will eventually start moving to other islands in the Indonesian archipelago for their holidays. “I think the more intrepid traveller will start going to Lombok, or Flores. I reckon the islands are what’s going to kick soon,” he says. “Bali will just be mass tourism; it won’t be luxury tourism. The islands will go to luxury. It’s what I see, but I could be wrong.”

Putting his money where his mouth is, later this year Meyrick will open Amber Lombok, an ambitious resort on Lombok island, 60km east of Bali.

“I want to go back to where you’re a pioneer again. And you’re doing something new.” 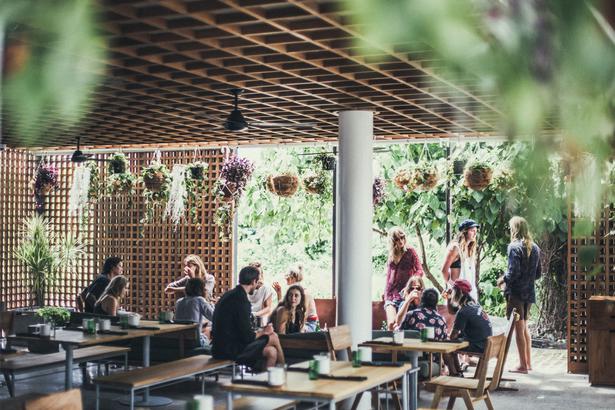 RESTAURANTS
The Slow Kitchen & Bar. New executive chef Daniel Medcalf is taking The Slow’s restaurant to new heights. Don’t miss the steamed local snapper — served with blue swimmer crab, organic coconut broth and roasted crab oil — it’s off the charts. The lamb tacos are a must too. The gorgeous ceramics are by Cisco & the Sun, a ceramic brand created by co-owner Cisco Tschurtschenthaler. Theslow.id

Bottega Italiana. With locations on Batu Bolong and Berawa, homemade pasta is the name of the game here. Their pesto is delicious, as are the salads, all for super reasonable prices. Bottegaitalianabali.com

Ji at the Hotel Tugu. Delicious Japanese fare at this Canggu institution. The only restaurant on the island is housed in a 311-year-old Kang XI period temple. The rooftop is one of the best places on the island to watch the sunset. Try their signature "Dragon of Ji" roll with prawn tempura, avocado, tobiko and spicy mayo. Don’t leave without checking out the hotel lobby, which houses an exclusive collection of historic Balinese artwork and cultural artefacts, including an impressive 4.9-metre tall wooden Garuda. Jirestaurantbali.com 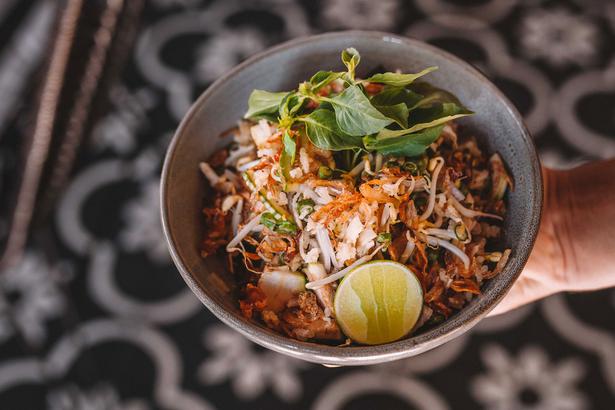 Fishbone Local. One of the best restaurants on the Batu Bolong strip. Their black cod cooked on coal served with kaffir lime and chili paste is ridiculously good. The prawn toast and lobster dumplings are delicious. Fishbonelocal.com

Mason. From the people behind Fishbone, Mason has been packing in Canggu’s beautiful people from day one who come for delicious offerings from the woodfired grill. The slow cooked lamb shoulder is already legendary. Masonbali.com

The Shady Shack. Canggu is packed with excellent vegan and vegetarian restaurants; if healthy eating is on the agenda you’ve come to the right part of Bali. Inventive operators include Peloton Supershop and Give Cafe; Shady Shack tops the list with their excellent salads, juices and charming garden setting. @theshadyshack

Ulekan. From the team that brought you Milk & Madu, one of Berawa’s best cafes, Ulekan delivers excellent quality, modern Indonesian cuisine at reasonable prices. Try all their sambals and don’t miss the jackfruit curry. Ulekanbali.com 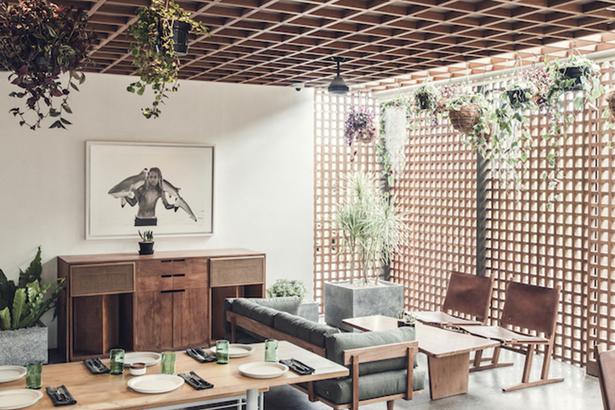 HOTELS
The Slow. The Slow’s minimalist architecture has been described as “tropical brutalist” with an interior best described as “warm minimalist”. There’s no lobby; the owners wanted guests to have the feeling of being at home; you wander in from the street to a beautiful restaurant, art gallery and fashion store. There are more than 100 works of art on display around the hotel. The 12 chic suites feature native wood, vertical screens and enormous bathrooms. Hot off the press: in 2021, they’re opening a new Slow in Uluwatu, the surf mecca on the southwestern tip of Bali’s Bukit Peninsula. Theslow.id 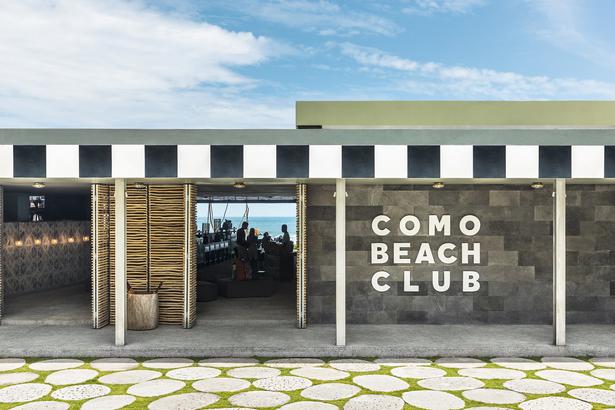 Como Uma Canggu. On the oceanfront in a prime position facing Echo Beach, the resort offers 52 rooms and suites, 55 one-and -two-bedroom residences, and 12 three-bedroom duplex penthouses, all featuring owner Christina Ong’s signature brand of blond wood accents and crisp white sheeting. The Como Beach Club is a “modern take on a traditional surf shack” and offers all-day dining including the renowned Como Shambhala health-oriented menus. The hotel’s gym — with soaring 4-metre ceilings, state-of-the-art equipment and dark wood and steel accents — must be the most stylish in all Indonesia. Comohotels.com

What better way to drink in the twinkling lights of Hong Kong than with a cocktail in hand?

The Most Elegant Stay in Flashy Miami