From NYC to LA, the stars dressed up in various locations for the start of awards season

In 2021, the show must go on, and as awards season kicks off for the year, we take a closer look at what the stars donned for their virtual acceptance speeches; some in studios in LA and others in the safety of their own back yards in various locations.

While there was no physical red carpet, the attendees still provided some escapism and glamour for the occasion.

Wearing an Alberta Ferretti gown with a cropped platinum do, the actress and comedian was styled by superstar stylist Law Roach to present on the night.

The actress wore a sunny Alex Perry gown with a plunging neckline as she presented the award for best-supporting actress to her "best friend," Jodie Foster, who won for her role in The Mauritanian. 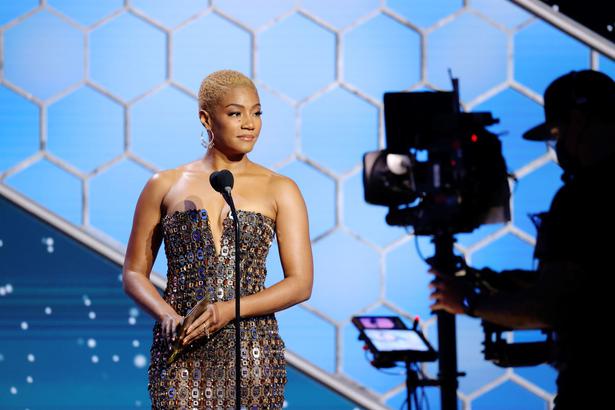 Wearing an Alberta Ferretti gown with a cropped platinum do, the actress and comedian was styled by superstar stylist Law Roach to present on the night.

Nominated for Ma Rainey’s Black Bottom, the actress shared an important message on her Instagram to highlight the fact that not a single member of the 87-strong governing body — The Hollywood Foreign Press — is Black. “The journey of a Black artist is littered with obstacles in creating, developing and being acknowledged for our work,” said Davis with the hashtag #TimesUpGlobes.

“If we continue to keep silent, the younger generation of artists will have the exact same load to carry. No more excuses.” She donned this vibrant design by Claude Kameni, an emerging Cameroon-born, LA-based designer who is on a mission to popularise the prints of Africa. Photo / @violadavis

The Schitt's Creek star virtually attended the Globes to pick up the show’s award for Best Television Series, Musical Or Comedy, wearing a full spring/summer 2021 Valentino couture look — the first time the house had ever produced couture for men.

Opting for this contemporary take of a gown on the official socially distanced red carpet in L.A, Cynthia looks cool and collected in another Valentino haute couture look made from lime green structured scuba fabric, sky-high platform shoes and leather opera gloves complement the bold look.

She wowed us in The Crown as the late Princess Diana, and for her portrayal of the royal favourite, Emma Corrin picked up her award for Best TV Drama Actress wearing a theatrical Miu Miu gown with Cartier jewels.

There to present an award, the actress adds some feathery flourish to her ensemble wearing a deep purple Dolce & Gabbana gown.

Nominated for her role as Catherine the Great in The Great, Elle Fanning channels some classic Grace Kelly glamour in a seafoam slinky gown from Gucci with Fred Leighton jewels.

At the first Golden Globe Awards of the new decade, there seemed to be a reckoning with reality. It's OK to enjoy fashion. It a...

The Coolest Looks From The MTV Video Music Awards 2020