Emma Watson as Meg March at a pastel-coloured ball in Boston. Photo / Supplied When it comes to a story as beloved as Little Women, adapted time and time again for the screen, it takes skill to add a new perspective to the well-trodden narrative. For Academy Award-winning costume designer Jacqueline Durran, signing on to design the costumes for Greta Gerwig’s new adaptation of the story was appealing because of the freshness she knew the director would bring.

Although she usually works in the UK, the costume designer travelled to the US to work with Greta for Little Women, seeing it as an opportunity to be a part of something interesting.

“It’s always the idea of the material and the director, and the combination that that’s going to create,” says Jacqueline, speaking from London. “I always say to people: any project can be boring, and any project can be great, it just depends how you look at the work, how you want to interpret it and what you want to say about the subject matter.” Director Greta makes no secret of how much she loves the original Civil War-era book, written by Louisa May Alcott in 1868 to critical and commercial acclaim. Thought to be semi-autobiographical, Little Women follows the four tight-knit March sisters living in rural America as they each start to grow up and figure out what they want from life.

Despite the title referencing a line in the book about their father referring to his daughters as such, none of them are diminutive in ambition. The reason Little Women was both radical for its time and has remained relevant for today lies in how it places importance on the varied hopes and dreams of the girls in its story, and Greta has created a heartwarming and intimate film in which each character is allowed to shine, helped along with a cast bursting at the seams with both rising and well-established talent.

READ: Downton Abbey Is Back And The Costumes Are Better Than Ever

Headstrong, opinionated Jo (widely thought to be Alcott herself) is played flawlessly by Saoirse Ronan. Having worked with the Irish actor on Atonement, Jacqueline was excited to work with her again, citing Saoirse’s involvement as another reason she was drawn to Little Women. “She’s an amazing actress,” she says, “and I loved working with her, that was part of the whole appeal of it.”

Kind, thoughtful Meg is lovingly played by Emma Watson; Florence Pugh brings complexity and understanding to impetuous, fashionable Amy, and Eliza Scanlan is the glue that binds them as the sweet and gentle Beth. Laura Dern is both angelic and flawed as mother Margaret “Marmee” March, and the always-brilliant Meryl Streep plays rich Aunt March. 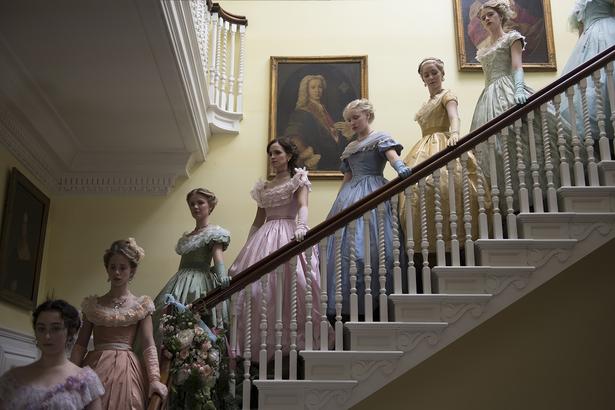 Emma Watson as Meg March at a pastel-coloured ball in Boston. Photo / Supplied

The costumes are an important part of distinguishing between the sisters and representing key characteristics of their personalities while also giving a sense that they’re a family, says Jacqueline. “They don’t strictly represent one thing because they’re richer characters than that, but Jo definitely has a boyish streak,” she says. “She’s the one that wants to make strides to make her place as a woman in the world, and so I think that her clothing follows from that.”

Thematically, each sister’s costume centres on a collection of colours, based loosely on a part of the book where Marmee gives them each a gift of a different coloured book on Christmas. “Red is definitely Jo’s colour, so red is thematically run through her costume, though she doesn’t wear red all the time.”

For Meg, her colours were purplish lavender complemented with a greeny-grey; Beth had a brown and pink, and for Amy it was blue and white — “light blue though, Jo had indigo".

In a way, the thing that I found the hardest to find was a way of looking at Meg’s character, visually,” says Jacqueline. Determining what style she would follow that would represent her interest in a conventional life path was challenging, she remembers.

She eventually settled on a kind of romanticism when it came to Meg – “I don’t want to say fairytale but there was a strain in Victorian life of the Pre-Raphaelites, and the Gothic Revival, of looking back to Medieval times and that sense of medieval courtly love and romance.” Tying those elements into Meg’s clothing helped to represent her romantic ideas of getting married and having a family.

READ: Behind The Costumes In Beauty And the Beast

Rather than follow a linear timeline as the book does, the 2019 adaptation jumps backwards and forwards in time and location, between America and Europe. The characters at their differing ages are played throughout by the same actors, and the costumes are particularly effective in visually marking each place for the viewer.

The film starts in New York, with Jo March wearing black to blend into her big-city surroundings and to be taken seriously as a writer. She runs through the streets, lifiting up her dress to reveal mannish britches and boots.

There was a conversation about having Jo wearing a hoop skirt at first, says Jacqueline, as if she was trying her best to be proper. “In the end it just didn’t feel right for her to have it, because it was too much of a step for Jo to have taken. We wanted to keep her rebellious nature.”

The costume direction followed the logic of each place, she says. “We had a lot of rural America, so we had country colours matching to the environment of nature. It’s got softer, more natural earth colours.”

For Amy’s stint in Europe, Jacqueline wanted to make sure it was a step ahead of America, style-wise. “The light clothes are very much inspired by the beginning of Impressionism, and Amy going to study art and seeing Impressionism, and realising that she wasn’t going to be a painter. But the early Impressionist paintings were the sort of thing she would have seen and aspired to.”

There are three balls in the film that each required different overall moods; Meg’s pastel Boston ball moment is particularly memorable. 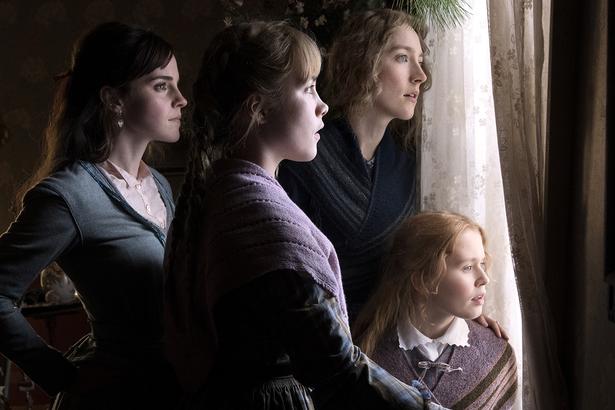 Incredibly, nearly every single costume piece for the film was made from scratch by Jacqueline and a core team of about 10 in what she describes as an “overwhelming challenge”. With essentially five lead characters including Marmee, and time jumps, plus all the supporting cast there were many, many costumes to be made.

It wouldn’t be Little Women without Laurie, and his and Jo’s luminous friendship. It’s as if actor Timothée Chalamet was born to play this literal boy next door, and the duo’s easy interactions are made all the more natural by the fact that he and Saoirse have worked together on another Greta Gerwig-directed film: Lady Bird in 2017.

Jacqueline designed both actors’ costumes with the other in mind, saying “there’s the idea that she [Jo] met Laurie, that they were the same, that she was quite boyish and he was quite feminine and they could interchange clothes.” That was part of both of their looks and their characters.

Laurie’s voluminous-sleeved shirts, waist coats and bohemian accessories wouldn’t look out of place in a modern fashion-lover’s wardrobe. He’s “100 per cent bohemian”, says Jacqueline, who designed his costumes to specifically suit Timothée’s frame, working with slimmer silhouettes rather than a boxy shape that was fashionable for men in the 1860s. “I thought that it would bring out that femininity in him as well, which, with the intertwining of his and Jo’s look[s], just seemed to work better with the style that we chose.” One of the most enchanting and moving aspects of the film overall is an intimacy between its characters, an unselfconsciousness as they stage theatre shows at home and tumble around one another. Photo / Supplied

One of the most enchanting and moving aspects of the film overall is an intimacy between its characters, an unselfconsciousness as they stage theatre shows at home and tumble around one another. How did Jacqueline convey this intimacy through the clothing?

“I was always conscious that Greta was wanting to liberate them from the rules of Victorian clothing,” she explains. “There is a basis for that, in the sense that the Alcotts were a radical family, and they didn’t necessarily wear corsets . . . so there’s a way of pushing them towards being freer in how they wore the costumes, and how they lived in them.”

It's through this artistic leap of imagination that the costumes bring such authenticity to the characters of Little Women, helping to convey their spirits for audiences old and new to fall in love with them all over again.

Little Women is in cinemas on January 2.