The first model to make the rounds of the Yves Klein blue set was Neda Brady, an architect. With wavy white hair and angular features, Brady was dressed all in black — a comfortably-fitting uniform of flat-front trousers, shirt and notched-collar jacket. A "Balenciaga" VIP tag on a lanyard hung around Brady's neck.

This was the opening salvo in a treatise about power dressing. This was not just a spring 2020 collection about business suits and executive sheaths. It was a monologue about the many forms that power takes and the variety of people who wield it.

The guests at the Balenciaga runway show Sunday were seated in a single row in a ring that spiralled up five levels. The walls, the carpeting, the ceiling, the chairs — everything — was bright blue. The tiered rings of seating recalled the chambers of the European Parliament and it was as though the international audience was gathered for some stifling plenary session on the relationship between worker rights and the modern nation state.

Designer Demna Gvasalia cast his show with a diverse range of people, some of them experienced models and others who took on the role for the day but otherwise work as architects, engineers, financial analysts, musicians, artists, mothers — and students in the process of nurturing their own authority. 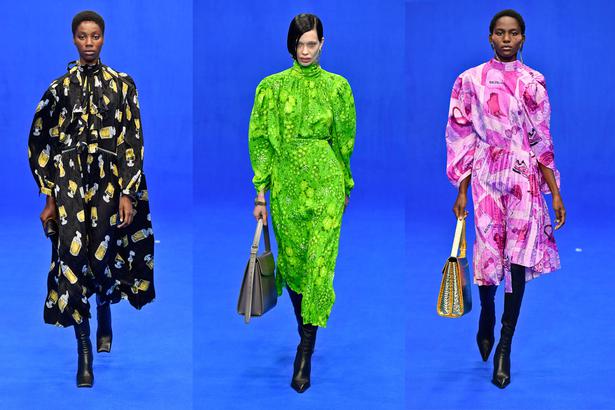 All of them wield a particular kind of power. They have the ability to shape our environment, to influence our culture, to move financial markets, to overturn governments, to teach us about unconditional love.

As the men and women made their way around the room, the music throbbed along with their footsteps, building to an ominous crescendo. Power, particularly as it is wielded by state actors, can be daunting and fearsome. And watching Gvasalia's power story unfold in this setting and in these times — with street protests in Hong Kong, an impeachment inquiry in Washington and climate change marches everywhere — made you shift uneasily in your seat. The struggles are real.

READ: Executive Realness: Why Tailoring Is One Trend To Watch

The uniform of bureaucrats was first on the runway. The suits. The men and women in black. They hold power because they enforce the rules. The VIP pass that turned into a Balenciaga accessory was a reminder that power comes with the ability to exclude. There is always another inner chamber, another rung to climb, another privilege to access. Power — and the lust for it — can be corrosive.

But it's also inspiring and reassuring to watch such a variety of men and women wind their way around the room with their own unique but determined stride. They didn't move with the precision of professional models — posture just so, one foot planted neatly in front of the other. Some of them lumbered around the room while others glided. One woman favoured her left side. One man bobbed along like a show pony. Others raced past like they needed to catch the last commuter train to the office. 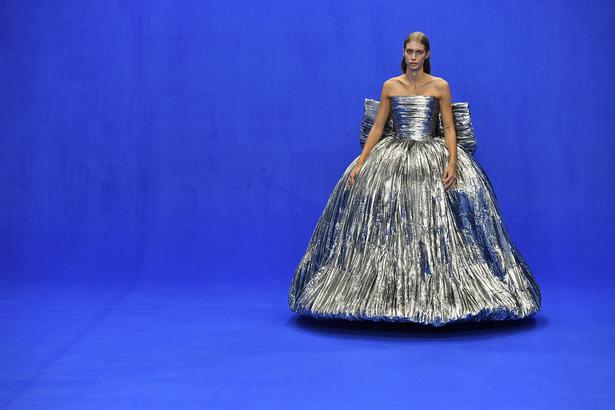 They wore black. A lot of black. These everyday power brokers wore tailored trousers and jackets with exaggerated shoulders whose whalebone inner support could be removed for a more relaxed silhouette. Coats were pressed with irregular permanent pleats and parkas enveloped the torso. There were tailored dresses as well as softly draping ones with seams that swirled around the body in tabloid prints and perfume bottle ones. But there were also clothes for those who don't need a traditional power uniform. They can flex their power in running shirts and track pants.

Much of the collection is a continuation of the conversation Gvasalia began when he was appointed creative director of Balenciaga in 2015. He has always turned to the unconventional and the overlooked in telling his story of luxury and exclusivity. Part of that exploration has included experimenting with proportions and elevating the quotidian. But for spring 2020, Gvasalia has put these ideas into a different context. Instead of situating them in the realm of aesthetes and hipsters, he places them in the centre of the mass consciousness. He inserts them into the workplace, the workday and the global conversation about what it means to be a worker in the 21st century. 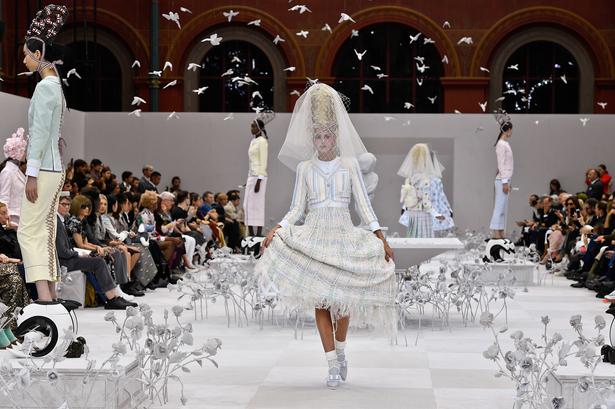 The answer is that it can be rather dour. It can make one feel like an anonymous cog. We must be responsible for our own joy. And there's joy to be had. Long velvet dresses have giant removable crinolines. Silver and gold Lurex dresses are giddily ostentatious. And black dresses rimmed in lacy ruffles exude elegance.

No matter how one might feel about the aesthetics of Gvasalia's vision of power, there's a certain reassurance in its consideration. The women move in their clothes with as much ease and confidence as the men do. Their autonomy isn't celebrated; it's simply presumed. Gvasalia's realism may at times be harsh, but it's also liberating.

READ: How A New Generation Of Designers Is Redefining The Narrative At NY Fashion Week

Because designer Thom Browne presented his spring collection only a few hours after Balenciaga, it was hard not to view it with the notion of female liberation and autonomy front of mind. And it was hard not to be exasperated by Browne's whimsy. Not because one can't delight in a set that a includes a field of seersucker flowers and lithesome sprites in pastel panniers jutting out over tiny, tiny shorts, but because Browne has made a habit of feeding that whimsy by transforming women into props — of planting them atop perilously high heels for ornamental effect. And Sunday afternoon, at least one of them had to be monitored from the sidelines, as the poor girl was at risk of tumbling over like a wilting flower on a hot day. Having a quartet of young women stand along the edges of the runway added nothing to the presentation. Instead, you were left jiggling your leg impatiently and hoping that the models meandering through the flowers would pick up their pace before a paramedic needed to be called. For Pete's sake. Come on. Enough already.

Browne likes to use men as sentinels, too. But they, at least, are typically wearing flat shoes. They are not wearing hobbling skirts. Browne's production choices distract from his work and he is a master at his craft. Every quilt-like coat, every skirt with deep and extravagant folds, every perfectly tailored tweed jacket spoke of luxury and precision.

The joy that Browne expressed in his spring collection was powerful. But it was profoundly sad to see his models made powerless.